The best live darts betting sites are Bet365 and Betfair. Bet365 is a bookmaker with more coverage than any site, plus generous offers in the form of bonuses, promotions and a loyalty scheme. Betfair is a peer to peer betting exchange which results in better odds as there is no bookmaker in this format; punters need only pay a commission on their wins.

As we have mentioned, darts continues to grow and coverage on satellite television has made it one of the most watched sports in the UK. 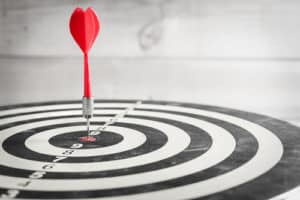 Darts can be a very tough market to find those outside value bets and more often than not, just a handful of players will only really be in contention. It’s for this reason that when wagering on this sport we can look further afield at accumulator bets.

Each tournament will have a schedule for that evening. Whilst many of the big names will be heavy odds on favourites, making money from these players will require substantial bets.

If we look to place accumulator bets that include a few of these bigger names, then our odds decrease slightly but we actually have a chance to see a return without as much stake required to back the favourites. 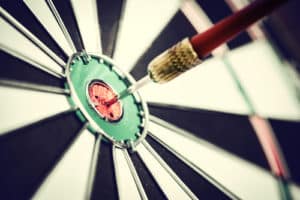 Before tournaments start are widely regarded as the best times to be placing any darts bets on the outcome of the winner. This is when odds are at a premium even on the favourites.

As we progress throughout the tournament the odds are likely to shorten.

When they do, to lock in a guaranteed profit, we can use an exchange such as Betfair (which is massive for darts betting) to lay our original bet off and make us money on any result.

You can implore betting calculators to work out exactly what price you need for differentiating amounts of profit.

This is a fast and furious game, so in-game bets need to be made quickly. One of the best sites to take advantage of an array of in-play markets is that of Bet365. Markets include Winner of Next Leg, Winning Margin, Highest Checkout and highest Average. As the game progresses you can get an idea of how people are playing and which market to take advantage of.

Since the introduction of the PDC (Professional Darts Corporation) in 1992 the world of darts has been turned on its head.

The breakaway league has been at the forefront of a multi-million pound cash injection into the sport at professional, amateur and junior levels.

As the game increases its popularity, darts wagering has become a massive feature for a lot of online bookmaker’s compiling odds on various markets. The in-play betting has seen many shrewd gamblers integrate previous betting strategies and adapting them profitably to darts.

The highlight of the year is the William Hill World Darts Championship with participants from around the globe taking part. Held annually at the Alexandra Palace in London over the 17 years it has been won by only 5 different players, Phil Taylor, Dennis Priestley, John Part, Raymond van Barneveld and Adrian Lewis.

The championships are a hot bed for punters around the world with many bookmakers offering up specials to entice people to bet. Prize money for 2017 was a hefty £1.8 million and was by far and away the richest event on tour.

The World Match Play Championships takes place at Winter Gardens, Blackpool and are widely regarded as the ‘second major of darts’. With a winner’s cheque of £100,000 up for grabs, this event is another that draws the big names in the sport.

One of the most interesting tournaments on the PDC tour is the World Grand Prix held in Dublin, Ireland. The reason behind this is because unlike any other event, each player must start and finish on a double. The shorter early round format of the tournament allows for many surprises and offers bettors a great chance to back outsiders that have a realistic chance in this shootout format.

The Premier League of Darts is run over a number of weeks in league format before breaking off in the final week into a four way playoff (the four at the top of the league at the end of the season go into the playoff). The interest in the Premier has massively grown over the years with venues selling out way before a dart has even been thrown. Many bookmakers offer mass in-running options on Premier League fixtures. As the players are so evenly matched ability wise, it can be close, however this does not mean the value bets cannot be found.