The best gambling sites for in-play rugby betting are Bet365 and Betfair. Both offer a wide selection of betting options, plus live streaming video of the best matches. Live streaming video allows punters to get a feel for the momentum of a game before placing any bets. 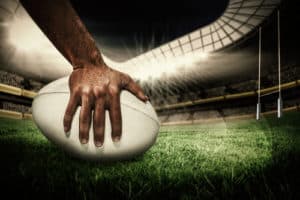 Rugby is one the most popular sports in the world with over four-billion viewers tuning into watch the World Cup every four years.

However if you’re from a major television market such as the United States or Germany you might not even know the competition exists.

The reason is simple: The National Football League, better known as the NFL. Whilst the sports no longer resemble one another as much, their origins are the same; gridiron is an Americanized variant of IRB rugby. In this article I’ll cover which rugby competitions are popular and give advice about betting on the sport.

In the UK, rugby is popular with the Aviva Premiership and Heineken Cup leading the way, and Super 15 being one of their favourite competitions.

With southern hemisphere countries such as Australia, New Zealand and South Africa also adopting rugby as one of their national sports, the player base, quality and intensity has led to a competitive betting market. As you’re probably aware, competitive markets generally mean efficient markets as well, and… rugby is no exception when it comes “matches”.

Where to Bet Live Matches

If you’re a recreational punter interested in wagering on rugby, the two best betting sites for you are most likely Bovada (for the US) and Bet365 (for the rest of the world). Both of them sites are known for their bonus offers and promotions. Although using only two online bookmakers might decrease your odds slightly, remembers this is an efficient market so the difference will be minor; the bonuses and promotions will more than offset these differences.

It’s a little different when it comes to major international competitions. In the early going and just before game time, it is not uncommon to find arbitrage opportunities because the odds tend to vary greatly between different sites. You should shop the odds at as many in-play sites as you possibly can. Consider Pinnacle Sports, Ladbrokes, Stan James and William Hill great additions to your line-up.

To take quick look at the major international competitions we have the Rugby World Cup every four years which is the pinnacle of this sport. In addition there is the Six Nations tournament held annually between England, Scotland, Ireland, Wales, France and Italy, making it the largest rugby competition exclusive to the northern hemisphere.

Another major international tournament is the Tri Nations, consisting of South Africa, New Zealand and Australia. As these three teams often make up part of the top 5 ranked teams in the world, the Tri Nations is the southern hemisphere’s equivalent to the Six Nations competition held in Europe.

Although covered in the intro of this section, to expand a little: domestically the pinnacle of the European game comes in the form of the Heineken Cup where the elite teams from across Europe do battle to win the most prestigious crown in club rugby. Historically teams from the countries making up that of the Six Nations qualify based on where they finish in their respected leagues.

The Aviva Premiership is the highlight of the English domestic season with 12 teams currently doing battle to make the playoff format at the end of season, before ultimately being crowned champions. Saracens lifted the trophy in 2011 after beating title favourites, and 1st place finishers in the league, Leicester.

For obvious reasons most punters stick to UK bookmakers when betting on domestic rugby. If you’re a serious punter looking for the best odds consider Bovada and 5Dimes when shopping prices. These are two of the largest online bookies for gridiron and both have great reputations.

Neither site specializes in rugby, but does offer it with moderate betting limits. Considering both sites tend to move and update their rugby odds slowly some unique opportunities can be spotted.

As the popularity of Rugby continues to grow worldwide, many bookmakers are opening up the amount of markets currently available to bet on. Due to the fact rugby betting is still in its early years of popularity there can be some fantastic markets to pick up some really solid value bets.

Historically we would say that bookmakers are pretty shrewd when it comes to setting a line for the outright winner of a match. However, in major competition value can still be found due to public biased which is no longer the case in most sports.

Let me explain: as mentioned the Aviva Premiership has its top four finishers in the league take part in a play-off style knockout to decide to outright league winner.

Let’s use the outcome of 2011 season for example. The Play Offs saw Leicester (1st), Saracens (2nd), Gloucester (3rd) and Northampton (4th) all compete to win the title outright. The odds were conformed in order of league ranking.

In the regular season Saracens had actually beaten league leaders Leicester twice already, but were only the second favourite to win the competition outright, whilst Northampton had made into the final of the Heineken Cup, which is no mean feat. Both of these teams were at longer odds, yet had the form going into the playoff finals. Whilst a one situation sample doesn’t matter much to a handicapper, Saracens did go on to beat Leicester for the third time that season and become crowned the Aviva Premiership Champions and the bookmakers made a hefty profit as a result.

If you’re accustomed to NFL football betting, this suggestion might sound 1990’s to you, but fan bias does influence live rugby betting for outright winners. The reason this is possible relates to UK bookmakers being considerably tighter with their tolerance to risk.

Winning punters are invited to leave more often AND betting limits are also conservative ($7500 max at the big sites willing to take mid five figures on NFL). The fans tend to always bet based on seed… simple handicapping and line shopping can lead to some serious profits when betting outright winners. 5Dimes.eu is a great place to find unique outright winner lines with a low bookmaker over round.