10 NBA Players That Need to Get Traded 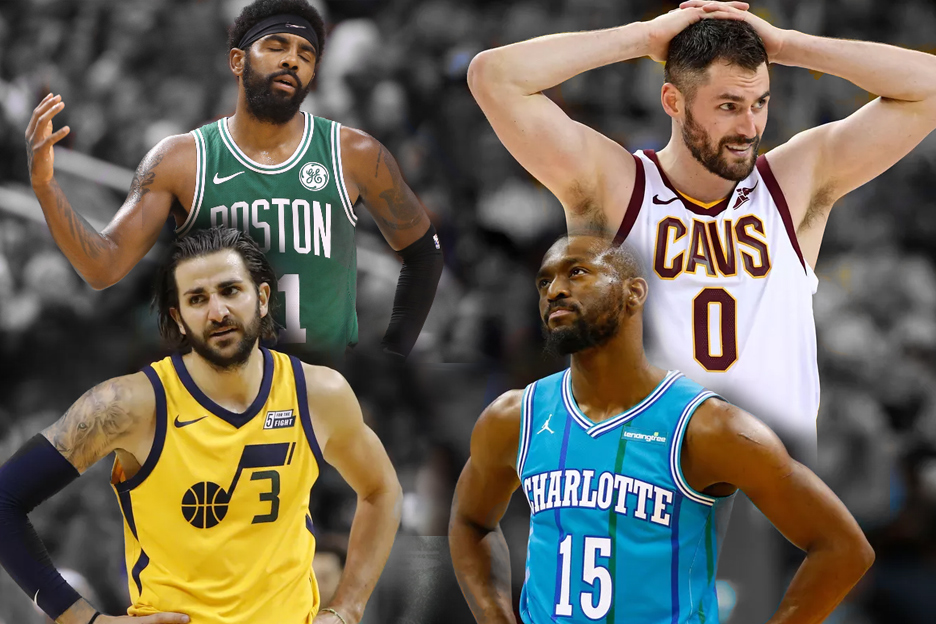 By now everyone is well aware that Jimmy Butler isn’t long for Minnesota. The Timberwolves have a massive four-pick deal from the Houston Rockets sitting on the table, but aren’t ready to pull the trigger.

It’s obviously just a matter of time before Butler is sent packing, though. He leads a long list of players that could or absolutely should be moved.

I’m focusing on the latter, especially with how it might impact teams once they make said moves. Not including Butler, let’s take a look at 10 of the biggest NBA stars that should get dealt as soon as possible:

This one is weird. The Cavs signed Love to a big contract in hopes his star power would help Cleveland get through post-LeBron withdrawals. It hasn’t worked, as Love is already hurt and the team has yet to win a game as I write this.

Love could still return and be the superstar they want him to be, but he’s pushing 30 and hasn’t made enough of a difference as the go-to guy to this point. If the Cavs want to jump ship, they need a taker for quite a big contract.

Still, landing Love could be worth it for the right title contender or someone who is on the brink that views him as the missing link. Love is still a top shelf scorer who can rebound and start the break as well as anyone.

The Cavs are going nowhere fast (+10000 odds at Sportsbetting.ag just to win their division!) and probably wouldn’t mind expediting the rebuilding process by getting a slew of assets in return for a still viable talent.

They just canned head coach Tyronn Lue after all.

Any deal for Love would have to wait, of course. Not only is he hurt at the moment, but his new extension prohibits him from being dealt until January at the earliest.

Once on the table, however, don’t be shocked if teams like the Thunder, Blazers, Jazz and/or Pacers see what it’d take to get him.

Another guy I see as movable is Rubio, who notoriously gets off to slow starts and just isn’t an efficient offensive producer.

He defends at a solid level, can score and certainly can set his teammates up, but with Donovan Mitchell on the rise and taking on more playmaking responsibility, I’m not sure Rubio is a long-term fit with Utah anymore.

Add in the presence of quality depth guards like Alec Burks, Dante Exum and rookie Grayson Allen, and a move shipping Rubio out of town isn’t that crazy.

There are NBA teams that could use Rubio, but the Jazz could probably use a little more shooting or an upgrade at the three or four. Utah currently has respectable +6600 odds to win it all this year, but they seem to be 1-2 moves away from really closing the gap on the top teams in the league.

An in-conference deal with the Spurs isn’t out of the question, while teams like the Knicks, Pacers and Suns could view Rubio as an upgrade and long-term fix for the position.

There are already Otto Porter trade rumors, so he’s absolutely a name you need to look for. Not only because he’s already been in talks, but because the Wizards aren’t winning games this year.

With the lack of success, pretty much everyone in D.C. appears to be fair game and I’d start with Porter, who can defend and hit the outside jumper but offers little else.

Washington felt like a sleeper to make a run at the Finals this year, but that’s really no longer the case. With the Wizards accidentally in full tank mode, it would be wise for them to sell off parts that aren’t working.

Porter’s absence would free up run for Austin Rivers, Jeff Green and of course Kelly Oubre, while it could also bring back an asset in the process.

The Jimmy Butler trade rumors are dominating the scene in Minnesota, but I actually think the Wolves shouldn’t even stop there.

Butler has been rather public about the issues with this young roster and Wiggins is arguably the main problem. He isn’t a great defender, he doesn’t use his athleticism enough and he’s basically a one-trick pony who doesn’t even score efficiently.

Wiggins is still young and has loads of upside, but I get the feeling he’s just never going to realize his potential.

If Minnesota at all agrees, they should act fast and see if anyone thinks he’s more valuable than he actually is. Doing so would finally turn the offense over to Karl-Anthony Towns, while also freeing up guys like Josh Okogie and Derrick Rose to take on bigger roles in a season that’s about to be lost anyways.

Teams like the Cavaliers, Nets, Kings and so many others could still hold Wiggin’s talent in high regard. He’s not turning anyone into a title contender, but perhaps a divorce is the right move for all parties involved.

Conley is a real difference-maker that could help make someone a Finals contender. He plays strong defense, he can effectively run an offense and over the years he’s turned into a viable outside shooting threat.

I’m not sure who can stomach his fat salary at this point, but Memphis is going nowhere and needs to ditch their franchise point guard so they can start seriously building toward a brighter future.

Conley simply isn’t going to be part of that and point guard-needy teams like the Spurs or Pacers could show interest if Memphis gets real about their current situation.

The Grizzlies were in competition for the #1 pick in the draft last year, so you know they’re in a bad way. If they’re at all considering dealing Conley, they absolutely have to be looking hard at ridding themselves of an aging center like Gasol.

Gasol’s place in the modern NBA is unclear, but he can still score, rebound and defend. He’s in regression and costs a lot, but the right team that still deploys these types of bigs could show interest.

The real play for Memphis is just getting whatever assets they can for two aging stars that aren’t helping them win consistently anymore. The Spurs and Clippers are two teams that have issues at the five spot at the moment.

One other star center that should be unloaded is Vucevic. Not only is he in a contract year, but he just doesn’t fit into Orlando’s long-term picture any longer.

The Magic just signed Aaron Gordon to a massive deal and in the last two years spent high draft picks on Jonathan Isaac and Mohamed Bamba. Those guys are their future and keeping Vucevic around will only stunt their growth.

Vucevic can rebound, block shots, score down low or stretch defenses with his jumper. He’s actually quite useful, provided any prospective suitors can look past his inconsistent defense.

There is more value here with Vucevic just because he can stretch defenses with his shot, but I doubt anyone gives up too much with his contract about to dry up.

This one may sound like a shocker, but the Blazers might have to make a drastic move if they want to ascend the rankings. They remain a very balanced team and are again a playoff threat, but getting swept in the playoffs in round one last year showed they still have work to do.

Damian Lillard is the franchise and shouldn’t be dealt, but McCollum is a far less impactful version. He doesn’t consistently set others up and while his isolation offense is fantastic, his imprint on the rest of the game is just really weak.

A number of rebuilding teams could send a veteran to Portland in hopes to land a young star.

Teams like the Hawks, Cavs, Nets and others could make sense in trade talks and depending on who Portland gets back (maybe Kevin Love?), they could greatly improve their middling +10000 NBA Finals odds.

There is no getting around the fact that Walker is playing out of his mind right now. As I write this, the guy is averaging over 31 points per game and is carrying the Hornets all by his lonesome.

The problem is it really isn’t translating into reliable success and I’m also not even sure it’s sustainable. The Hornets could try to go the other way and get help for their 28-year old franchise cornerstone, but it may make more fiscal sense to just move on and get assets back in a trade.

Walker is proving on the fly that he brings a lot to the table, so playoff threats like the Spurs, Jazz and others may want to seriously consider upgrading the point with a deal.

Lastly, you have the curious case of Kyrie Irving. He’s suggested he’s ready to commit to the Celtics, but right now he’s operating in a contract year and nothing is guaranteed.

Boston may not even be so ready to sign on the dotted line, either. Irving routinely has lower leg issues and has twice been unable to finish the season with his squad.

Irving might like the idea of competing for titles with the Celtics, but with Terry Rozier waiting in the wings, Boston might opt to get all they can in an Irving trade.

It’d be a risky move, to be sure. The Celtics are one of the top Finals threats (+750 odds at Sportsbetting.ag) and keeping a potentially healthy Irving would be a coup. However, if they can bring back another star in a deal and boost Rozier to the starting five, perhaps it wouldn’t be a bad idea.

This might just be the tip of the iceberg. Obviously there is the elephant in the room in Kawhi Leonard, while teams like the Lakers might not be done making huge moves just yet.

I think there is the potential for a ton of movement going into this year’s NBA trade deadline.

Whether these 10 guys get dealt or not will be interesting to see, but there’s no denying they all make sense to be shipped out of town for the right price.