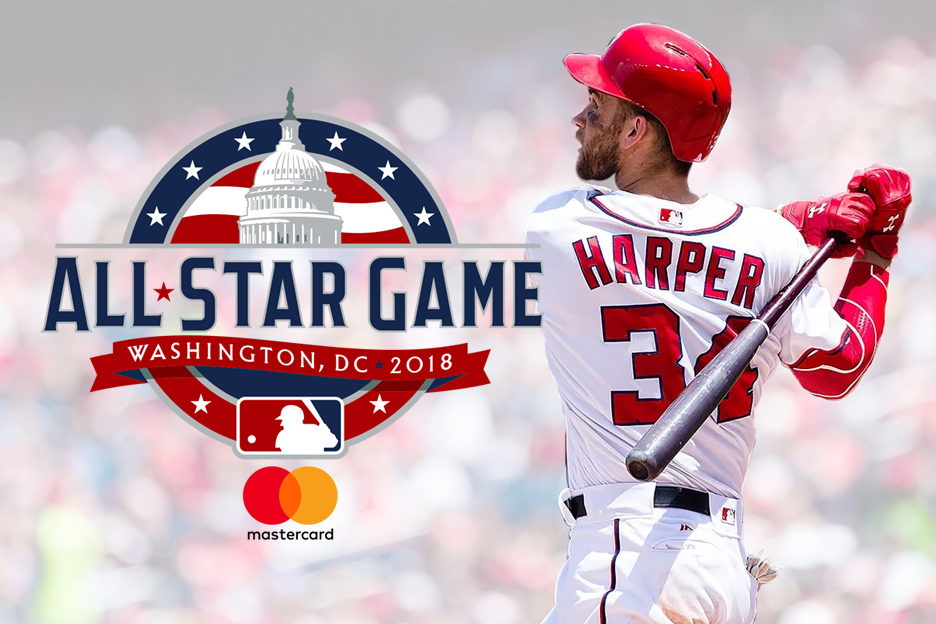 It is finally here! My favorite part of the All-Star festivities, the 2018 Home Run Derby! Each year, the day before the All-Star game, the best power hitters in the game get together to see who can hit the most home runs! The event has changed in recent years to a bracket format to add even more excitement to the already action packed event!

This year the Home Run Derby will feature eight of the top hitters from both leagues. The players are ranked one through eight and then matchup up bracket style with the winner of each pairing moving on to the next round until we are down to just one winner! Last year we saw Yankees superstar Aaron Judge take home the crown when he launched an incredible forty-seven home runs combined throughout the three rounds enroot to the title.

This year the Home Run Derby is seemingly lacking just a little bit of star power. Last year we saw Giancarlo Stanton, Mike Moustakas, and Aaron Judge as well as up and coming stars Cody Bellinger and Gary Sanchez competing for the title. This year it is a youth movement as many of this year’s hitters are budding stars with relatively little Major League experience.

The two big names in this year’s event are Bryce Harper and Freddie Freeman. But when you look back on years past and think of names like Ken Griffey Jr., Vladimir Guerrero, Jason Giambi, and Miguel Tejada this event has been known to showcase some serious talent. In a couple years when we look back on this field of hitters, we will likely be thinking the same thing!

This is a matchup between two of the lesser-known players in this year’s field. Jesus Aguilar is in his fifth Major League season and has a total of just forty career home runs. With twenty-four of them coming this year. To be fair to Aguilar, he was mostly a bench guy in his time with the Cleveland Indians with just a handful of plate appearances, but to see this guy as the top-ranked player in the field is a bit suspect to me.

Rhys Hoskins is another guy that hasn’t done much at the Major League level yet. In just one hundred and thirty-six career games over two seasons, less than a full Major League season combined, Hoskins has smashed thirty-two home runs. This is a guy that has legit power, and at just twenty-five years old I only see him getting stronger.

I will take a little upset special here in the first round as I see Rhys Hoskins advancing to the next round. Neither of these guys have much history to pull from, and I think Hoskins is the naturally stronger man. And even though the rankings show this as a major upset, the betting line doesn’t, as Aguilar is the third betting favorite while Hoskins is fifth.

In what is unquestionably the best matchup of the entire event, we see superstars Bryce Harper, and Freddie Freeman square off in the first round. Harper is a guy that has unquestioned power and has one hundred and seventy-three career home runs, the second most of any player in the field. Harper has a 162-game average of thirty-three homers a year and as a big added X-factor, will be hitting at home in front of his hometown fans in Washington.

Freeman is a huge fan favorite, as illustrated by the fact that he received the most All-Star votes this year in the National League. However, Freeman isn’t exactly known for his unbridled power. The guy hits his fair share of long balls, averaging twenty-six home runs per 162-games, but has only hit more than thirty home runs in a season one time in his nine-year career.

When you look at the fact the fact that Harper will be hitting at home and is the only player to have ever participated in the Home Run Derby before, he is going to be a very tough out tonight. The guy has huge power and a flair for the dramatic, and he is going to go deep in this event.

This is clearly the weakest of the first-round matchups. Max Muncy is a one-hit wonder in my book right now. The longtime minor leaguer had a total of five home runs in the big leagues before this season in close to one hundred career games. He has enjoyed a great season so far this year as he has exploded for twenty-two home runs in just seventy-four games. But, I am not ready to say this guy is a legit threat to win the whole thing.

Now, Javier Baez? He could win it all. This kid is still just twenty-five years old and swings out of his shoes regularly. My worry about Baez isn’t that he is going to struggle, it is that he is going to go too hard too early and run out of gas before the finals. We have seen that several times in the past where the guy that hits the most homers in the first round doesn’t have anything left for the finals.

I see Baez as the star of the first round. I think he goes crazy and ends round one with the highest homer total. The kid loves to swing the bat hard and was built for a competition like this, and I see him advancing easily.

This is my favorite matchup of the first round. Bregman was the World Series hero last season for the Houston Astros, and Shwarber led his Cubs team to a ring the year before that on one good leg. Both of these guys have shown the ability to really show up when the stage is a big one, and I expect an entertaining battle in this one.

Bregman is a great young talent, but I am not sure he is ready to go head to head with Kyle Shwarber. Bregman has just forty-seven career home runs, with twenty of them coming this year. I think in two or three years he could be a guy that is winning MVP awards. But at just twenty-four years of age, I don’t think he is quite ready just yet.

Kyle Shwarber is unabashedly a home run hitter. He is young and loves to swing for the fences. At times, that has gotten him in trouble, like when he got sent down to the minors for a bit last season. But when you look at his 162-game homer average, it is thirty-seven bombs a year. That is the highest of any player in the competition. Nobody is going to care tonight that he strikes out too much or his hitting just .249 on the season, they are going to love watching him hit moon shots.

When you think of just raw power, Kyle Shwarber has to be the favorite. He showed this earlier this year when he stung a home run at a 117 MPH exit velocity, that is the hardest hit ball of any player in tonight’s filed. Shwarber might be the only guy to take a couple of swings and misses tonight, but I also think he is going to hit a lot of deep bombs.

This is where I see Hoskins night ending. After picking up the upset in the first round, his day will come to an end at the hands of Kyle Shwarber in round two. Shwarber just has too much power to exit any earlier than the finals, and Hoskins Cinderella story ends right here.

The second round is where a lot of guys really start showing some fatigue. I think Baez is going to blow his load in round one and have nothing left in round two. While Harper will likely tire some as well, this is where I see him being able to channel the strength from all those hometown fans to power him through to the finals.

Here we are, at the finals! When you look at Major League Baseball’s seeding, this looks like the number two overall seed facing the five seed. But when you look at the betting favorites, these are the two guys up top. Just like the NCAA basketball tournament, the seeding means nothing, its all about what Vegas has to say. And as far as the sharps are concerned, these are the two best of the bunch, and I couldn’t agree more.

In the end, the finals almost always seems like a toss-up. Generally, the guys that go big early go home late in the finals. I am going with yet another upset in this one as I will back Kyle Shwarber to win it all in 2018! Harper has hit in this competition before, and ran out of gas and lost to eventual champion Yoenis Cespedes in 2013, and I see that happening again this year.

Harper just swings the bat so hard every time that I don’t think he will have enough gas left in the tank to carry him through the finals. So, I will take the free-swinging Kyle Shwarber at +333 odds to win the 2018 Home Run Derby!

You have seen my brackets and know who I see winning it all, but even the best-laid plans sometimes fail to work out in the end, so I am going to give you a couple extra picks that I see as having some value outside of Kyle Shwarber. If Javier Baez can not blow his arms out early on, he should certainly be a contender and is showing great value at +550. And my final pick would be Alex Bregman at +1100. Not that I think he is going to win, but this is a bad number for sure. To make him the biggest longshot in this event seems a bit suspect and when I see a bad number, I like to take advantage of it! Good luck and happy betting!