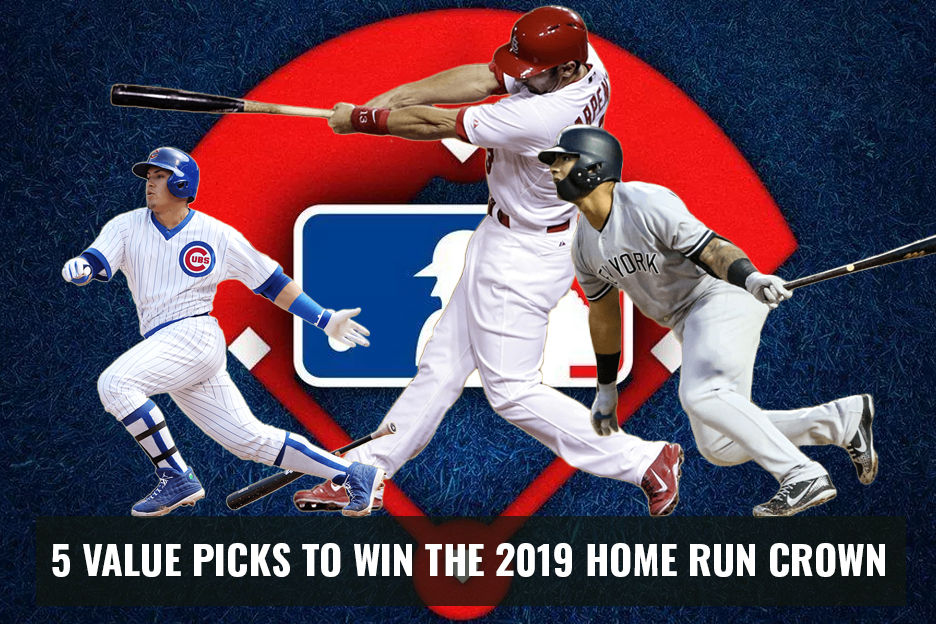 Who doesn’t dig the long ball?

There’s not much in baseball that beats a majestic drive into the seats, fountain, street, body of water or anything else that may reside behind the wall of an MLB stadium.

Not only do MLB baseball players make money hitting dingers, but thanks to MyBookie, we can too.

MyBookie has odds set for who will hit the most regular-season home runs in the 2019 MLB baseball season. Not every player in the league is listed, however, most everyday players are and it is virtually guaranteed that the home run king in 2019 is available among the players in this list.

Be sure to note that we are looking for value here. That means no Mike Trout, no J.D. Martinez and no Khris Davis who paced the big leagues with 48 dingers in 2018.

Let’s look at five players that could conceivably get involved in the home run race in 2019, with odds that could make us become their biggest fan this upcoming season.

Talk about an all or nothin’ guy.

Javy Baez enjoyed his coming out party in the 2018 campaign where he crushed 34 long balls and produced a big-time .264 isolated slugging (ISO) figure, both of which were easily career highs. There are two things I like about his chances as an underdog to win the 2019 home run crown.

First, Baez has seen his power develop each and every year of his big league career when he has seen at least 90 plate appearances. Let’s look at his power numbers so far throughout his career.

Clearly, Baez has improved in the power department notably over the last three years. Still just 26 years old, I doubt that improvement has been capped to this point.

He strikes out a lot, although he cut his strikeout rate from 28.3% in 2017 to 25.9% in 2018. He also doesn’t walk much with a career 4.9% walk rate. He’ll swing at just about anything close to the plate, and the fact he doesn’t take a walk theoretically means he has more plate appearances to put the ball over the fence than the common everyday player.

If he can continue to work on his plate discipline and force pitchers to throw him strikes more often, that will help. The jet stream that blows out to left field at Wrigley Field in Chicago also helps the right-handed hitting second baseman.

His 34 long balls in 2018 ranked 15th in baseball. The exciting thing is his power could still be developing, which could put him in line for 40+ bombs in 2019 and would, therefore, put him in the home run race to be sure.

For the first time in his career, David Dahl will get everyday reps in the Rockies outfield as both Carlos Gonzalez and Gerardo Parra are not going to be back with the team in 2019, leaving Dahl and Charlie Blackmon as the only two outfielders on the roster at the moment.

What Dahl showed in his 271 MLB plate appearances in 2018, however, was impressive. The 10th overall pick from the 2012 draft clubbed 16 homers and produced a .264 ISO across those 271 plate appearances and 248 at-bats with the Rockies.

I believe Dahl will be in for a full workload in 2019, which means he should get roughly 650 plate appearances this upcoming season. If you take his 16 homers in 271 plate appearances from last year and pace that out over 650 plate appearances, that equates to 38 home runs. If you want to factor in a few extra bombs from a power development standpoint given the fact he’s only 24, and Dahl could reasonably hit 40 home runs in 2019.

Of course, we have a serious ballpark advantage when it comes to the young slugger. Coors Field in Colorado is by far the most favorable ballpark for the home run ball. Dahl benefited in a big way from the Coors Field effect last year, producing a massive .361 ISO and 1.051 OPS with 13 homers across just 154 plate appearances at home. He will have to improve upon his poor .124 ISO and .597 OPS on the road next season if he wants to be in this race.

Let’s look for Dahl to continue his power development in the first full season of his MLB career while he could certainly surprise his way into the home run race.

Considering Carpenter finished 13th in the home run race last season with 36 home runs, it stands to reason that he will be in the mix again this time around.

Carpenter has really been an interesting player to watch over the last handful of seasons. He has always been a high-OBP player, but he didn’t start to hit for home run power until the 2015 season when he launched 28 home runs, which was his career high until last season.

Whatever Carpenter did during that 2014-15 offseason, hook it to my veins.

That is a serious jump in power, and he’s been a home run threat ever since.

Like Dahl, I like the fact that Carpenter handles both left and right-handed pitching with power, which explains why he’s been an everyday player for the last six seasons.

Let’s took a look at his righty/lefty splits from his career year in 2018.

As you can see, Carpenter has no problem hitting for power against both left and right-handed pitching. A monstrous July/August was the key to his home run total last year as he launched 20 home runs in those two months combined, but at the end of the day it doesn’t matter when you hit your home runs for the purpose of this discussion.

I don’t see any reason, barring injury of course, why Carpenter won’t approach 40 home runs again this season while he could have more left in the tank after a phenomenal 2018 campaign.

It was a sensational rookie campaign for Torres in 2018, and I’m looking for a big step forward from the 22-year-old in 2019.

The interesting thing about the .209 ISO and 24 home runs Torres put up across his 484 plate appearances in his rookie season is that he didn’t really have a track record of hitting for much power in the minors.

Of course, he was always younger than most of the competition during his minor league career, but that was certainly the case in his first big league season as well.

For instance, Torres produced just a .148 ISO with two homers in 96 plate appearances with the Yankees Triple-A affiliate in the 2017 season. Although he hit for a .223 ISO with five homers in 139 plate appearances at Double-A that same year, it didn’t exactly set him up for so much success in the power department in his first big league tour.

As a right-handed hitter, Torres doesn’t benefit much from the short porch in right at Yankee Stadium, and he did a lot of his damage against left-handed pitching.

Check out his lefty-righty splits from 2018.

However, if Torres can mirror another second baseman above, Javier Baez, he could have a chance.

Check out the progress the right-handed hitting Baez made against righties from 2017 to 2018.

Can Torres make such a large adjustment at such a young age? That remains to be seen. What I do know is that Torres produced a .930 OPS with both home runs coming against right-handers in the aforementioned Triple-A stop noted above.

Torres should log everyday at-bats for the Yankees in 2019, and that alone should improve his home run total. Whether or not he can hit for more power against righties is another issue, however, at +20000, I think we can roll the dice and let that question answer itself over the course of the season.

This one is a tentative bet as I want to see how the Dodgers’ lineup looks like over the course of the next few weeks. In other words, I want to see if they add another position player that could eat into Muncy’s workload this upcoming season.

Simply put, Muncy was the single biggest surprise of 2018 when he burst onto the scene and launched 35 home runs in only 481 plate appearances.

Those plate appearances left Muncy short of counting as a “qualified” hitter for stats purposes. However, among players with at least 450 plate appearances in 2018, Muncy’s .319 ISO was the best mark in the big leagues. Yes, better than Mike Trout, Mookie Betts, Khris Davis, and J.D. Martinez.

Part of the reason why Muncy didn’t qualify was the fact he began the year in Triple-A and didn’t log a big league plate appearance until April 17th.

Another reason is that Muncy was part of a deep Dodgers lineup that had him sitting against left-handed starters, although based on his numbers against lefties, I’m not sure why.

Sure, he outproduced against righties, but the left-handed hitting Muncy absolutely clobbered left-handed pitching as well. So much so that I would have to think that he gets more reps against southpaws next year despite the Dodgers re-signing David Freese, a right-handed hitting corner infielder.

At +20000, I’m willing to take the chance and see if Muncy can’t find a full-time role and mash his way to a home run crown.

Also, here’s something to get you fired up for the upcoming baseball season!