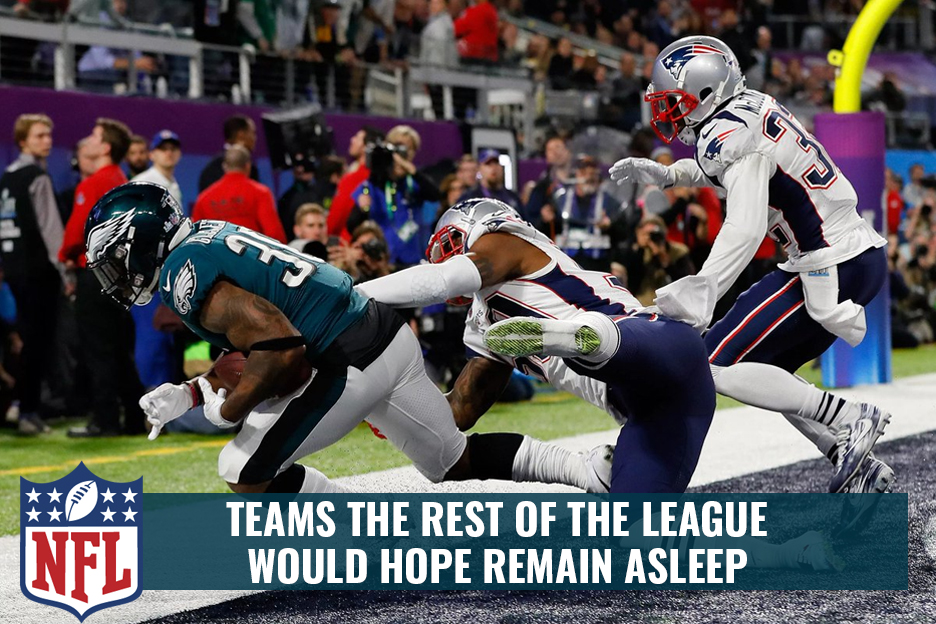 Through the midway mark in the season, there have some contenders established while others certainly look like pretenders.

We can look around the league and identify the Rams, Saints, Patriots, and Chiefs as serious Super Bowl contenders while the Steelers, Panthers, Texans, Bengals, Chargers, and Redskins all look like quality playoff hopefuls.

That said, there is a lot of football left.

There are many teams that we are used to seeing at the tops of their divisions that scuffled through the first half. Injuries, inconsistency and the flat-out poor play of these preseason favorite-type teams has allowed some under-the-radar clubs to come out of the gate and throw their name into the playoff conversation hat.

These types of teams would qualify as teams the rest of the league would hope remain asleep, because the playoff picture could change in a hurry if they awake.

Let’s go ahead identify four NFL teams that the rest of the league does not want to wake up.

The reigning champs had big-time expectations to at least repeat as NFC East champions while many preseason power rankings had Doug Pederson’s squad perched at the top.

After a season-opening win over the Falcons, the Eagles went just 2-4 over their next six games before getting back to the .500 mark with a Week 8 win over the Jaguars.

Philly enjoyed a Week 9 bye with the always anticipated NFC East showdown against the Dallas Cowboys on tap in Week 10, in Philadelphia. The win over the Jags to get to 4-4 was nice, but this upcoming tilt is one they will be fired up for. The Cowboys just took one on the chin at home to the Titans on Monday night, so this is a team that is already hanging on by a thread in this division.

There’s no team in the NFL that would enjoy delivering that knockout punch more than these Eagles. It’s one of the more hate-filled rivalries in the sport and as is often the case, it’s a primetime game on Sunday Night Football.

If the Eagles can take advantage of a Cowboys team on the brink, they can see the route they need to take for an NFC East title. Four of their next five games come against NFC East opponents with the Cowboys representing two of those games. Two of their final five games come against the Redskins who currently sit atop the division at 5-3, just one game ahead of the Eagles.

Carson Wentz got himself another weapon to his to his disposal when the Eagles acquired wide receiver Golden Tate from the Detroit Lions. 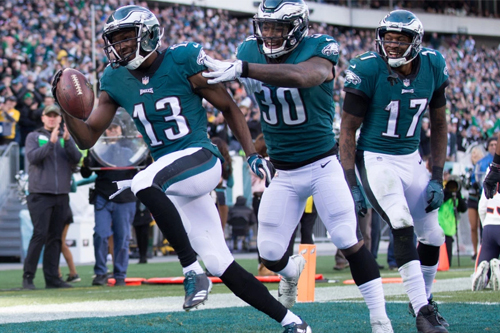 With Tate, Alshon Jeffery, Nelson Agholor and Jordan Matthews lining up at receiver, Wentz is in good hands. Add Zach Ertz, possibly the top tight end in the league right now, and the Eagles are going to be hard to keep off out of the end zone the rest of the way.

They may have had a sleepy first half to the season, but they have an opportunity to wake up and chase down a second straight NFC East crown.

Maybe it’s just not the Packers year, but this is a team that the rest of the NFC North would certainly want to remain asleep for the remainder of the season.

The season-opening win for the Packers came at a great cost as Aaron Rodgers injured his knee and will not be the same mobile machine we have seen many times in the past. Since that win, the Packers are 2-4-1 and are still without a road win in four tries.

However, it’s not Rodgers’ fault, nor the offense in general. Green Bay ranks sixth in offense at 406.6 yards per game, ahead of Tom Brady’s Patriots and Drew Brees’ Saints. That number also leads the NFC North division with the division-leading Bears checking in at 17th after Week 9.

The defense hasn’t even been that bad, either. Green Bay ranks 16th in defense this season and their pass defense ranks 10th.

The true key to their demise so far has been that aforementioned poor record on the road.

While they’re 0-4 on the road, keep in mind that they have traveled to Washington, Detroit, L.A. Rams, and New England in their four road games. Three of those teams are division leaders and the Lions are a division rival, meaning all four are very difficult road games to win. The remaining road games aren’t a cakewalk, but they play at Seattle, Minnesota, Chicago and the Jets in the second half. Those teams are a combined 17-16-1, compared to the 23-11 record they faced on the road in the first half.

Even better is their remaining four games at Lambeau Field where they host the Dolphins, Cardinals, Falcons, and Lions. Those teams are a combined 14-19 on the season.

Keep in mind that Mason Crosby missed a game-winning field goal after being iced in Week 2, which resulted in their tie against the Vikings. He also missed four consecutive field goals and an extra point in the Packers’ Week 5 loss in Detroit, a game they easily win if he hits three of those four field goals.

Kicking is part of football, but the Packers would be 5-3 if Crosby was his typical self this season, which would be good for a first-place share in the division.

Despite a tough schedule and some very untimely botched field goals, the Packers are still arm’s length away from a playoff spot while the rest of the league hopes a softer second half schedule doesn’t equal a rally from Rodgers and co.

You could say that the Falcons are already awake after winning three straight games, however, unfortunately, those wins have been done rather quietly thanks to a three-game win streak from the Panthers and a seven-game streak from the Saints within the NFC South.

It’s a tough break for Dan Quinn’s Falcons, however, this is a team that is capable of streaking back into playoff contention.

Atlanta obviously sports one of the top QB-WR duos in the league in the form of Matt Ryan and Julio Jones. Rookie Calvin Ridley has joined the party this season as his seven touchdowns have him in a second-place tie league-wide with Devane Adams, Adam Thielen, DeAndre Hopkins, Tyreek Hill, and Eric Ebron. That’s some impressive company.

The end result has the Falcons ranking second in pass offense this season.

On the flip side, their rushing attack ranks 28th, partially due to the extended absence of lead back Devonta Freeman who isn’t eligible to return to action until Week 15 at the earliest.

PLEASE NOTE:
However, where this team has really struggled is on defense. The Falcons’ 412.8 yards against per game ranks them 28th. However, there’s a team below them in the form of the Kansas City Chiefs that ranks 31st, but yet are 8-1 on the season. The Falcons are going to have to win under a much similar formula.

After a 38-14 statement win over the Redskins in Washington, the Falcons have two more favorable games upcoming at Cleveland and against Dallas. They could be 6-4 before you know it and right back in the thick of the NFC playoff picture.

Also boding well for Atlanta is their intra-Conference and head-to-head records. They have a 4-2 record within the NFC and have wins over Carolina and Washington. These two wins give them the upper hand in a tie-breaking procedure for an NFC Wild Card spot, assuming the Saints win the south. They play the Panthers again in Week 16.

If you are 6-4 after 10 games and hold tie-breaking scenarios in your favor, you’re doing fine.

For now, the Falcons have woken up from their sleep, but the rest of the league surely wishes they would shut er’ back down.

Favored heavily to win the AFC South, the Jaguars have been in full hibernation for their last four games before getting their much-needed bye in Week 9.

After reaching last year’s AFC Conference Championship game against the Patriots, Jacksonville started out hot this year with a 3-1 record before dropping games in Kansas City and Dallas before heading home to lose to the Titans and Eagles.

Over that stretch, it’s hard to tell which side of the ball has been more disappointing. They’ve been outscored 114-46 over their last four contests.

That said, AFC teams are liking praying they don’t come out of the bye with vengeance on their minds.

Look, this is still a top-two defense in this league. Only the Ravens have allowed fewer than the 313.2 yards per game the Jags’ defense has surrendered. In terms of pass defense, no one has been better than Jacksonville’s 190 yards against per game in this area.

Where the team has struggled is on both sides of the running game. The Jaguars rank 24th in both rushing defense and rushing offense. The offensive part can be partly explained by the absence of Leonard Fournette who hasn’t suited up since Week 2 and has just 20 carries on the season. He’s expected back coming out of the bye, but the complete lack of a rushing attack in his absence has made it very difficult for the Jacksonville offense to sustain drives despite owning a middle-of-the-pack passing offense.

We also need to consider the remaining schedule like we have for other clubs. Out of the bye, the Jags get just one team over .500 over their first five games in the form of the Pittsburgh Steelers. Otherwise, they face the Colts twice, the Bills and the Titans, who own a combined 12-22 record. What an opportunity that lies ahead for the Jags to get on a sustained run.

If this team gets into the playoffs, that ferocious pass defense is going to give some of these playoff-bound quarterbacks trouble. They are just 3-5 at the halfway mark, but there’s a very real chance the Jaguars could be 6-6 after 12 games.

Not too many teams are going to want to face that defense in the playoffs, which is why the rest of the league is hoping the Jaguars didn’t wake up in their Week 9 bye.