5 NHL Clubs Who Could Use a Rebuild 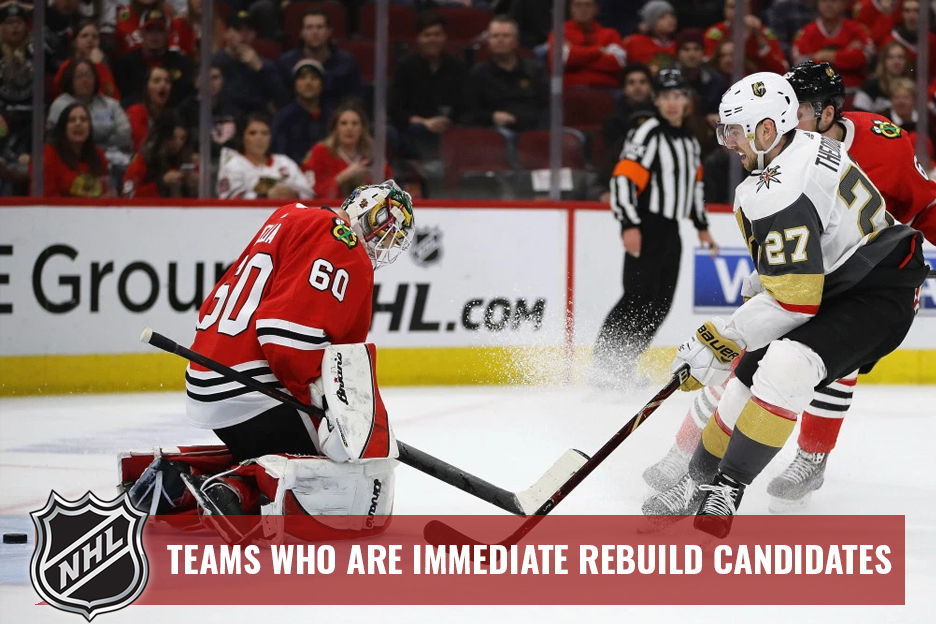 No one wants to do it and it’s a tough pill to swallow.

You will see executives call it a “reset” or a “retool”, but such adjectives are mostly designed to keep fans in the seats and revenues flowing.

Not every rebuild is a full-on fire sale and a complete teardown. Often times, the team rebuilds over several years and deals away current or expiring assets for future assets as they deem necessary. Other times, there is one area where the team needs an overhaul.

There are certainly some NHL teams that are ready to set sail on this journey. Let’s identify five NHL clubs who are immediate rebuild candidates.

The Kings signed Ilya Kovalchuk to a three-year, $18.75M deal this past offseason in the 35-year-old’s return to the NHL, a move that screamed win now.

Well, the Kings have done anything but win this season.

Currently, among the bottom three teams in the NHL, Los Angeles’ season has exposed some serious flaws in their makeup, and the solution isn’t an easy or snappy one.

They’re too old and too slow.

At 28.7 years old, the Kings entered the season in a three-way tie with the Minnesota Wild and Vegas Golden Knights for the distinction as the oldest teams in the NHL. Being old is one thing, but having almost your entire core on the wrong side of 30 is another in a league that is starting to favor speed and youth, two things the Kings don’t own.

Check out the ages of the Kings’ core players.

The solution appears pretty simple. You could trade some of these aging veterans to contending teams for the aforementioned youth and speed, right?

Well, not so far. Let’s look at the contract situations of the players listed above.

The Kings are the league’s worst offense, so we know that most of the forwards listed above are not having good seasons. They’re also having their worst defensive season in recent memory, so the same can be said for the aforementioned blueliners and Jonathan Quick.

Given their production versus their cost, no one in their right mind is trading for any of these players and eating all the money, with Doughty being the lone exception. The game has caught up to these players and it hasn’t been pretty this season.

It’s not going to be easy for GM and former Kings defenseman Rob Blake to steer the ship back in the right direction, but the Kings are in need of a roster makeover to be sure.

No one can stay on top forever and Blackhawks fans are currently getting their dose of what the bottom third of the standings look like again this season.

Unlike the Kings who I believe need a full-scale teardown, I wouldn’t mind if GM Stan Bowman did, in fact, refer to his team’s rebuild as a “retool”.

Why? Because Chicago actually has some nice young pieces aboard, especially up front.

DeBrincat is a future Rocket Richard candidate and Strome has done exceedingly well since coming over from Arizona in a trade along with Perlini. For his part, Perlini scored 17 goals as a 20-year-old on a brutal Coyotes offense last season, so plenty of upside remains despite the down year.

Jokiharju looks like a player and Delia has been real good in the NHL this season after posting a stout 2.34 GAA and .933 SAv% in 17 AHL games this season. He appears to be legit.

Therefore, I am looking for the Blackhawks to do two things: Fix the blueline and consider trades for their superstar players.

Chicago’s back end as been a disaster for the overwhelming majority of the season, rankings 30th in overall team defense. At 35 and 33 years of age, Duncan Keith and Brent Seabrook are shells of their former selves. Their contracts are obstacles, but perhaps not unmovable.

The next point is a little harder to consider. I think the Blackhawks should explore trades for Patrick Kane and Jonathan Toews.

PLEASE NOTE
Both players are under contract for four more seasons after this one at significant $10.5M cap hits. Sure, that’s a lot of money to absorb for any team looking into these players, but consider what you’re getting.

Kane is having a dynamite season with 24 goals and 58 points in 45 games and Toews has bounced back from a poor 2017-18 season with 18 goals and 40 points this time around. You want guys like this around for a rebuild, but imagine the haul they could get for Kane and/or Toews.

For a team that is annually up against the ropes with the cap, shedding some salary and netting some big-time returns for coveted players would be one heck of a way to kick start a rebuild.

This team had had a dreadful season and their star players are not getting any younger.

The Flyers had playoff aspirations again this season, but those hopes are all but quashed at the halfway point of the season as Philly is currently in the NHL’s basement with a 15-22-6 record.

No team needs a full-scale teardown akin to the Kings, and like the Blackhawks, the Flyers have some nice young players in their lineup including Ivan Provorov, Nolan Patrick, Travis Konecny, Travis Sanheim and 20-year-old netminder Carter Hart.

However, their youth combined with their established talent have gotten them no where this season. So, what to do?

Similar to the Blackhawks situation above, I would start fielding offers for my best players, namely Claude Giroux. The Flyers have one of their established veterans in Wayne Simmonds heading towards UFA status this offseason, and he’s expected to be one of the most coveted players at this year’s trade deadline as a result. Rather than retain the 30-year-old coming off another down season, the Flyers should start their rebuild by dealing Simmonds as this year’s deadline.

Giroux is only 30 years old and is enjoying another stellar season after posting 102 points last year, but this game doesn’t get easier into your 30s. He carries a team-friendly $8.275M cap hit for three more years after this one, figures that could net the Flyers a serious haul.

Newly-minted GM Chuck Fletcher isn’t likely going to have his first move come by sending the franchise player out of town. However, something needs to be done here and Giroux would be the most attractive name on the board if he hit the trade market.

It looks as it’s Hart’s crease for next year, but the Flyers are going to need a better group of blueliners to protect their young stud of a netminder. That’s the best place to start.

No matter how you slice it, the Flyers need to consider a rebuilding process that can align with Hart coming into his own some years down the road.

Arguably one of the most disappointing teams in the NHL this season, it has uncharacteristically been the Blues’ blueline that has given them the most grief this season, combined with their lack of goaltending.

Check out some of the Blues’ defensive numbers this season.

There are still 11 NHL teams who are older than the Blues, but this feels like an old team. Their slow, heavy style of play reminds me of the Kings and it’s gotten them beat consistently all season long.

Now, the Blues are sure-fire sellers at this deadline and they have some assets that will net them future assets come February.

Teams looking for an experienced bottom-pair defenseman could look at either Jay Bouwmeester or Carl Gunnarsson, both of whom are UFAs at season’s end.

Up front, the Blues will field calls on Patrick Maroon giving his pending UFA status, but I think they should aim higher.

Similar to a couple of scenarios above, I think the Blues should dangle Vladimir Tarasenko on the trade market.

For the second straight year, Tarasenko is underperforming, but I have a hard time believing it’s his fault.

Keep in mind this guy is still just 27 years old and he carries an extremely attractive cap hit of $7.5M over four more years after this one.

Check out where Tarasenko stacks up since entering the league for his first full season in 2013-14 up until today.

Plenty of teams would be willing to pony up some assets to acquire a player of Tarasenko’s skill level on a team-friendly contract in the hope that a change of scenery can bring back the player who scored at least 37 goals from 2014-15 through 2016-17.

GM Doug Armstrong’s admirable effort to get the Blues over the hump and into the playoffs this season has fallen short, and a quick change of strategy is needed to get this franchise back on its feet.

The Ducks are clinging to a playoff spot in the west, but they have done so on the back of 25-year-old goaltender John Gibson, so at least their goaltending situation is set in stone for the foreseeable future.

However, this group of forwards needs to be turned over regardless of how the Ducks finish the season.

There doesn’t appear to be a quick fix considering the situations the Ducks’ veteran forwards find themselves in. Let’s look at some of the production Anaheim has received from their core veteran forwards this season

Guys like Getzlaf and Henrique are still production, but Getzlaf’s advanced age and style of play don’t bode well for this type of production to continue much longer.

Keep in mind the Ducks still two players in Patrick Eaves (34) and Corey Perry (33) who reside on IR, and in Perry’s case, has not played all season.

The end result has Anaheim sitting 30th in offense.

Their peripheral stats are among the most concerning in the league where they rank 28th with a 47.1% Corsi For% at even strength and 30th with a -6.5 average shot differential per game. Gibson has been outstanding, which is why the Ducks are somehow in the playoff picture despite a -24 goal differential, good for 25th league-wide.

These unproductive vets either aren’t going to be easy to move due to their contract or simply won’t get much in return given their age versus production.

In order to beef up their offense, GM Bob Murray will likely have to sacrifice some surplus of quality young defensemen. It’s a route he will need to take to get better, or the Ducks could continue to spend more time in their own end given their lack of pressure at the offensive end.