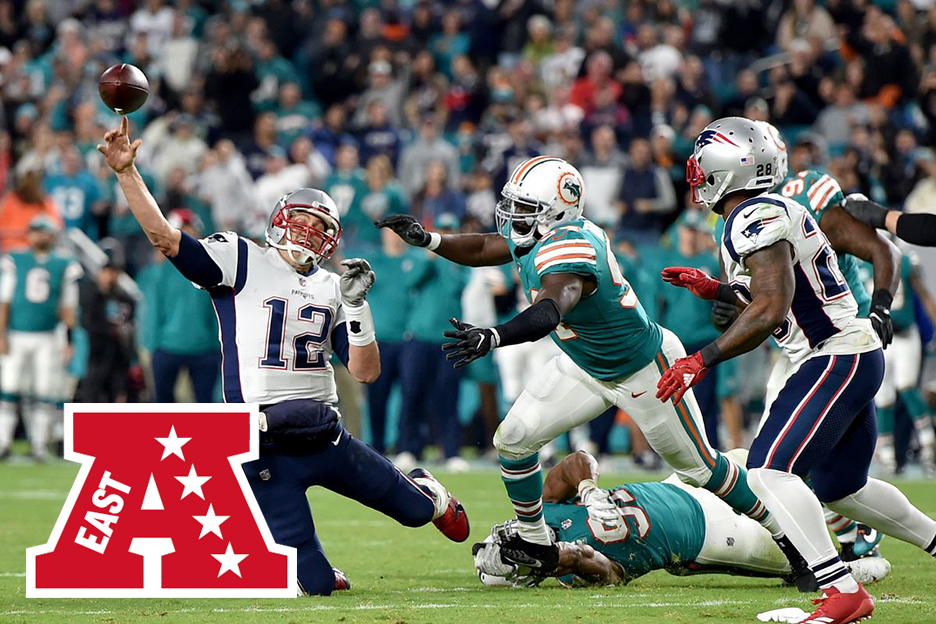 We are through just three weeks of the NFL season, but hey, that means the first quarter of the season is almost in the rear view mirror!

That said, it’s really never too early to lock in some futures plays and take advantage of some of the odds that are out there.

Like has been the case for nine straight seasons, the AFC East was supposed to be won by the New England Patriots. The Patriots are still heavy -225 favorites at this point, as per BetOnline, however, the fact remains they sit at just 1-2 after three weeks, the same record the Bills and Jets sit with while all three teams trail the undefeated Miami Dolphins at a perfect 3-0.

Clearly, the oddsmakers are betting on Tom Brady, and who could blame them? Still, for the first time in a long time, there is at least a hint of doubt in Brady’s ability to rally this team back into first place in what seemed like a layup of a division for Brady, Belichick and co.

Before we get into our pick, let’s see what BetOnline has each team’s odds at heading towards Week 4.

Somehow, the Bills rose from the dead and thumped the first-place Vikings on their own turf in Week 3. However, Josh Allen is going to go through some rigorous ups and down in his first NFL season and it’s tough to see this Bills team mounting a surge to the top of the division.

Similar reasoning applies to the Jets. After a solid first two weeks in the league, Jets rookie quarterback Sam Darnold was stymied in Cleveland and his club was the first team to lose to the Browns since Week 16 of the 2016 season.

Therefore, I am seeing a two-team race here, and I only see value on one. Buckle Up.

I am going to take the old adage of “don’t bet against Tom Brady”, crumple it up, and throw it right out the window, because it makes sense here.

To me, there is little value in taking the Patriots to win this division as heavy favorites and two games back.

Sure, the Dolphins have had the easier schedule of the two so far, beating the Texans, Jets, and Raiders at this point while the Patriots have beat the same Texans, but dropped games at Jacksonville and at Detroit. Obviously, Miami has both of those opponents on their remaining schedule, but the good news for them is that the Lions and Jaguars games both come at home.

The Dolphins haven’t been great on offense as they rank 23rd after three weeks. But hey, the Patriots are two spots under them at 25th. Yes, the Patriots have faced that stout Jaguars defense on the road already, but they also scored 10 points against a Lions team that had allowed 78 points over their first two weeks to the Jets and 49ers.

Tom Brady threw for 133 yards in Sunday night’s loss. Those 133 yards are the fewest he has thrown in a game where he attempted more than 20 passes since Week 17 of the 2013 season, four and a half years ago.

Yes, Josh Gordon was inactive and Julian Edelman is still suspended. Brady still has the best tight end in football in Rob Gronkowski, a good receiver in Chris Hogan and a very reliable pass-catching back in James White. The Patriots somehow turned the Lions into the best pass-defending team in the NFL through three weeks.

Looking at the Dolphins, they are certainly getting things done by committee. Lead backs Kenyan Drake and Frank Gore rank next to each other at tied for 37th and 39th with 104 and 98 rushing yards, respectively.

Ryan Tannehill might not be airing it out to the tune of Ryan Fitzpatrick, Patrick Mahomes, and Ben Roethlisberger, but his 121.8 passer rating is the sixth-best mark in football and his 9.3 yards per attempt ranks him in a third-place tie with the Rams’ Jared Goff. He’s not putting up the gaudy stats, but he’s certainly been one of the most efficient quarterbacks in the league so far this season.

I’m also not loving the Patriots ranking 28th in total defense at this point. Yes, some of the best teams are interestingly at the bottom of the league in total defense, but when your offense isn’t clicking, ranking 28th is a problem. Miami isn’t significantly better at 21st, but they’ve allowed just 17 .3 points per game this season, the sixth-best mark in football.

The good news here is the Dolphins and Patriots are set for their first head-to-head matchup for the year in Week 4 at New England. This is the Patriots chance to make a move in the standings. However, if the Dolphins win this game, these +225 odds are going to be the highest odds we can get the Dolphins at this season.

If you think Miami can win this thing, lock them in now before a possible Week 4 win drops the odds significantly.

They certainly hold value, and this could be a fun story in the making.