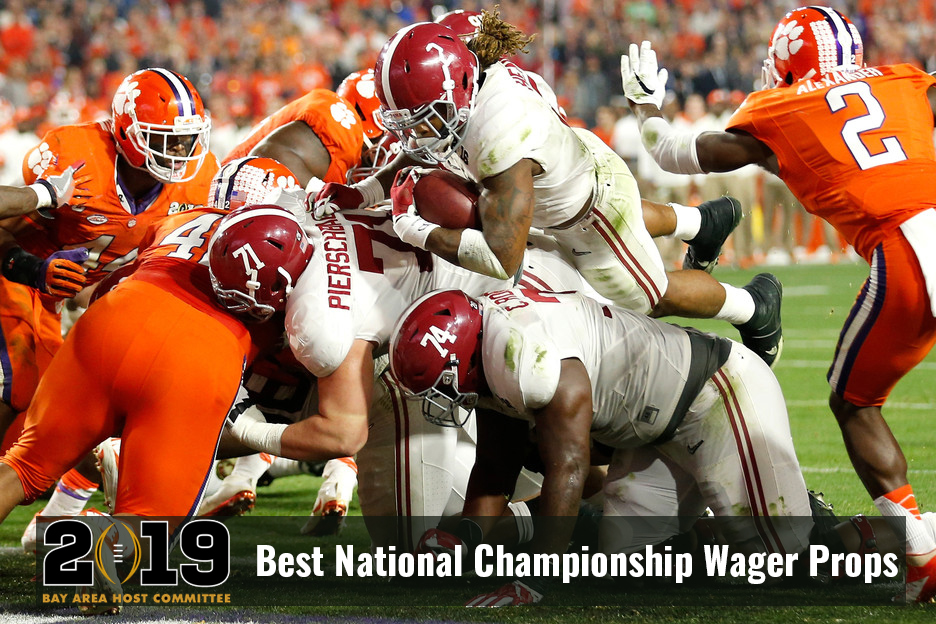 The Alabama Crimson Tide and Clemson Tigers are back in college football’s National Championship Game. It’ll be the third time they’ve met in the final during the College Football Playoff era, which started after the 2014 season.

Including the semi-final game last year, they’ve faced off in all but the first CFP. And now, whether the rest of college football likes it or not, they’re on the mountain-top once more.

Alabama comes in as five-point favorites, with two young star QBs and top-ranked defensive units leading both teams. That and some electric running from the likes of Travis Etienne (Clemson) and the Harris duo of Damien and Najee (Alabama).

Throughout this game, there will be plenty of opportunities to cash in, not only on the total points and spread bets, but on the smaller props. Being the national championship and all, there will be a ton of interesting, and even occasionally wacky, props worth banking on.

But searching through Bovada, I found what I believe to be the best wagers for Monday night’s showdown. One involves both teams, while the others focus on a single player, like Alabama QB Tua Tagovailoa and Etienne.

Here are the top potential wagers, in no particular order.

Tagovailoa dazzled last year in the National Championship Game, throwing for 166 yards in just one half.

But Clemson knows what’s coming, not like Georgia did last season. And while Tagovailoa put up incredible numbers this year, often without playing the 4th quarter, he had a lot of help against the best defenses.

Georgia, Miss State, and LSU were the three best units he played this year. An ankle injury kept his numbers down against UGA in the SEC Championship. But in these three games combined, his yards per attempt went from his 13.4 season average down to 7.1. 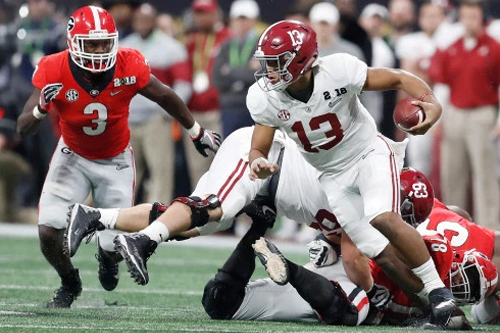 He had an average of 207 yards in those three contests, though he only played one half against Georgia.

Against respectable defenses like Auburn and Texas A&M, Tua cruised past the 297-yard mark. But in terms of stats, Clemson is unequivocally the best defense in college football. They bring immense amounts of pressure (top-five in sack rate) and are 4th in the nation against the pass.

They only allowed two QBs to get over the 297 mark and completely shut down Notre Dame’s Ian Book. Tagovailoa is obviously better than any QB Clemson has played. But the sophomore quarterback also has yet to play a front four this talented and won’t be getting much slack from the Tigers secondary either.

Expect Tagovailoa to have an efficient game. But his Oklahoma numbers (24 for 27, 318 yards) were against the 89th-ranked defense. Clemson’s defense is a whole different beast.

Three Unanswered Scores: Yes or No

These are always interesting because of how fickle momentum can come and go.

But while I think Alabama is simply more talented than Clemson, there’s not much of a gap. If the Tigers can survive the early onslaught from the Crimson Tide, this could go back and forth until the end. And even better, get you some real value in your wagering.

“No” is at +170 right now. Even when Alabama dominated Clemson in last year’s National Semi-Final, 24-6, there wasn’t three unanswered scores.

And the other two times they played in the national title the two consecutive years before that, there were never three unanswered scores. Combined, those two championships had a total of 151 points. Yet no one could maintain momentum long enough to grab three scores at a time.

And though Clemson isn’t quite on Alabama’s level, they’re an improved version of last year’s team. Sure, Alabama has Tagovailoa starting now and maturing receivers who are some of the best around.

But despite the Tide’s emergence, these teams haven’t been separated any further than they were at any point in the last three years.

PLEASE NOTE:
Clemson has the revenge factor in this one and there’s no way Alabama is giving up three unanswered scores. They haven’t done it all season, even in garbage time.

And neither have the Tigers. In fact, they’ve only given up three or more scores at any time in five of their 14 games, a number improved versus Notre Dame in the semis.

This is the best team either has faced, but that should only improve the chances of there not being three unanswered scores.

Both teams have certainly gotten three for themselves several times this year. But Oklahoma gave up big early numbers that Clemson No. 1 S&P-plus defense simply does not allow. And Alabama’s No. 1 success rate on the defense isn’t going to be prone to giving up a flurry of points either.

There’ll be too much of a constant see-saw in this game for that many scores to take place in a row. Even if the point total does break open.

For the longest time, Travis Etienne went under the radar. That’s hard to do when you’re a premier running back on a national title contender.

But after 1,500 yards and 8.3 a carry this season, it’s safe to say you’ll hear his name beside Clemson QB Trevor Lawrence’s as a Heisman contender next year. With that said, compiling over 85 yards against Alabama’s defense is a tall task.

The Crimson Tide give up a total of 121 rush yards a game on an average of almost 35 carries. That’s 3.5 per carry. What’s weird about that is any of the running backs who have rushed for over 85 yards against Alabama have all been from unsuspecting teams.

For the sake of example (and shout-outs), here’s the shortlist: Trey Regas (Louisiana-Lafayette), Rakeem Boyd (Arkansas), and Dante Smith (The Citadel). Whether by surprise or a product of playing the second-team defense, they compiled over 85 yards.

But when it came time to buckle down in big games, Alabama let the best RBs they’ve played go next-to-nowhere.

That’s quite the collection of talent. Maybe not Etienne-talent, aside from the Bulldogs backs (Swift and Holyfield) and Williams. But nonetheless, a great group. And they all combined for 254 rush yards, or 3.7 a carry.

Even Swift (4.7) and Holyfield (4.3) were kept in check, both averaging less than five yards per rush.

Etienne is capable of hitting some home runs in the run game. But this just isn’t a team that is going to be beaten like that on the ground. Maybe by a mobile QB, but not a lead back. He’d need 6.1 yards per carry given his average amount of carries this season.

Even if those touches are given a boost, it’ll be what Alabama is focusing on. It may be ill-advised, but the Tide are going to make Lawrence beat them. Not Etienne.

Renfrow always seems to show up when needed most.

Two years ago, he was the hero in the National Championship against Alabama, catching ten passes, including the winning score on the last offensive play.

And even though he’d be shut-down by his standards the next time the two teams met, he still managed five catches. That was in a game where the Tigers scored all of six points.

So if you think he’ll have less than four on the biggest stage in his final game in a Clemson uniform, I’d say you’d be sorely mistaken. This guy is a gamer and shouldn’t have this number despite the fact he only averaged 3.4 receptions a game in 2018.

Look at the biggest games Clemson had this year: Texas A&M, Syracuse, NC State, Boston College, Pitt, and Notre Dame. He averaged over four receptions in those games and met or surpassed the mark in four of the six contests.

Fellow wideouts Justyn Ross and Tee Higgins will get plenty of love from Lawrence and should be considering their talent. But that’s even more of a reason to have a guy in the slot like Renfrow. He has sure hands and can move the chains when the young quarterback needs it the most.

Alabama has the capabilities of shutting down top receivers. That comes as a surprise to no one. Just look at what happened to Marquise Brown of Oklahoma (top WR prospect, zero catches). But that allows for more underneath stuff to a tight end or a lesser-known receiver.

If there’s a clutch moment to be found in this game for Clemson, it’d be no surprise to see Renfrow at the center of it. He may not dominate every game, but he picks his spots well.