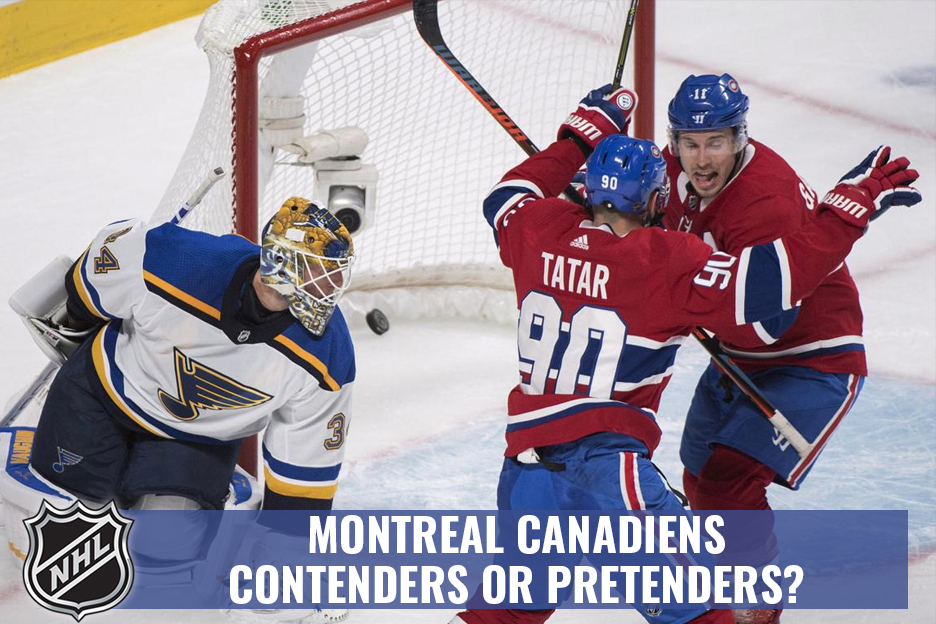 We’re through about a quarter of the NHL season and some of the contenders and pretenders are beginning to show their true colors.

Still, this early into the season, it’s still a little difficult to get a firm grasp on the true identity and potential of some NHL clubs.

Teams that show vast improvement and greatly surpass early expectations are all expected to come back down to earth, at least at this point in the season.

The Montreal Canadiens are one of those clubs.

This year’s Montreal Canadiens currently sit in the 5th place in the Atlantic with an 11-8-5 record through 24 games. It’s a record that far exceeds the most optimistic preseason expectations for the club.

What’s more is the fact that Montreal is competing despite some lackluster goaltending from their number one goaltender Carey Price. Price has mostly carried the Canadiens on his back since debuting in the 2007-08 season. Personally, I thought the Canadiens’ only shot at competing this season would be on the back of their 2005 first-rounder, but that simply hasn’t been the case.

Montreal has gotten it done at the other end of the ice. That is, on offense.

Their 3.1 goals per game ranks 13th in the league. While that may not seem overly impressive, consider that Montreal finished last season scoring just 2.52 goals per game, good for 29th.

They also rank 26th with 3.38 goals against per game on defense. Clearly, the offense has been the key cog in their success to this point.

With all this in mind, we still need to answer the question:

Clearly, the oddsmakers agree. They entered the season as +3400 to win the Atlantic Division, but now sit at +2500. They likely aren’t going to win this division given the fact that Tampa Bay and Toronto look like a couple of the very best teams in hockey. Still, those numbers lend credence to the fact that Montreal has surpassed expectations as contenders to this point.

The asterisk is no typo. I think the Canadiens can contend for the playoffs, just as I believe there are just a few teams in each conference that are true non-contenders. The parity in the league these days is just crazy.

You have to take standings with a grain of salt at this point in the season, they change every day and a two or three-game losing streak can all the sudden have you near the bottom of the conference. The single point for an overtime or shootout loss has created log jams in the standings for years, which is the NHL’s way of keeping as many fanbases involved and buying tickets with a sense that their team is competitive, which might not be true.

So yes, they are contenders because they are keeping up with the pack. They do look better, faster and more dangerous on offense. They also look rather suspect on the back end.

Despite far surpassing expectations offensively, the Canadiens are dead even in goal differential on the year at zero. They are outshooting teams by an average of just 1.1 shots per game. Both are obviously very mediocre figures.

Where they do move closer to the top of the league is in the advanced stats. Their 51.5% Corsi For% at even strength checks in at eighth league-wide. In comparison, the Maple Leafs rank 17th, the Wild rank 22nd and the Avalanche rank 27th. Clearly, you don’t need to dominate the possession game to win. We can see the other side of that spectrum at the top where the Hurricanes, Golden Knights, Panthers and Blackhawks rank in the top seven but yet all four are on the outside of the playoff picture looking in at this point in the season.

Still, having the puck and out-producing the opposing in terms of shot attempts at even strength does more good than bad.

And then there’s Price.

Truthfully, the Canadiens would be looking much better standings-wise than they do right now if they were getting just solid, but unspectacular goaltending from Price.

Price started fairly strong with a .915 Sv% in eight October starts, however, he has fallen off a cliff in November to the tune of a .880 Sv% in five starts. He’s allowed at least four goals against in four of those five November outings, although he did bounce back by turning aside 43 of 45 Flames shots in a 3-2 win in Calgary on Thursday.

There’s little doubt that the Canadiens are going to need more from Price than what he’s giving them. After cratering to a 3.11 GAA and a .900 Sv% last season, his 2.99 GAA and .899 Sv% this year through 13 starts doesn’t exactly scream bounce back. He also owns one of the scariest contracts in hockey as his 8-year, $84M contract that carries an annual $10.5M cap hit just kicked in this year. That a lot of money for below-average goaltending.

Looking ahead, the Canadiens have something to look forward to.

That would be the return of Shea Weber. After dealing with a foot injury that cut his season to just 26 games last season, Weber underwent knee surgery in the offseason which put him out for a big chunk to the start the season.

Now, his return isn’t imminent as Christmas still looks like the most reasonable return date for the 13-year veteran. Still, his return to the Montreal lineup is akin to acquiring an impact player via trade. Weber is by no means the same player that he was in his heyday with the Predators at the start of the decade. He’s still Montreal’s top defenseman and will help their power play in a big way after scoring 12 power play goals in his first full season with the Habs.

At the end of the day, I don’t see the Canadiens sneaking into the playoffs, as there are some very good teams in the east that have yet to hit their stride. That doesn’t mean they aren’t postseason contenders, but it’s going to be tough.

I mentioned the Penguins sit near the bottom of the standings. The defending champion Washington Capitals aren’t much further ahead. Florida is rolling now after a rough start with Roberto Luongo, and the Philadelphia Flyers are healthier and rebounding from a bad start of their own.

The road to a top-three spot in the Atlantic Division has some serious speedbumps. Tampa Bay and Toronto are looking awfully powerful and the Boston Bruins will be competing there too despite some serious injuries to their blueline at the moment. The Panthers also reside in the Atlantic and are looking more like their second half selves from last season.

The most obvious way the Canadiens can sneak into the playoffs is in one of the two Wild Card spots. That throws the Blue Jackets, Hurricanes, Islanders, Rangers and Sabres into the fray. The only clubs I would consider strong non-contenders in the east are the Senators and Red Wings.

They have surprised to the upside, but it’s a long season and the Montreal Canadiens are just one of many, many teams in this battle.

Time will tell if they get in, but for now, the Montreal Canadiens are indeed true playoff contenders.