Best MLB Over/Under Win Totals to Bet On in 2019 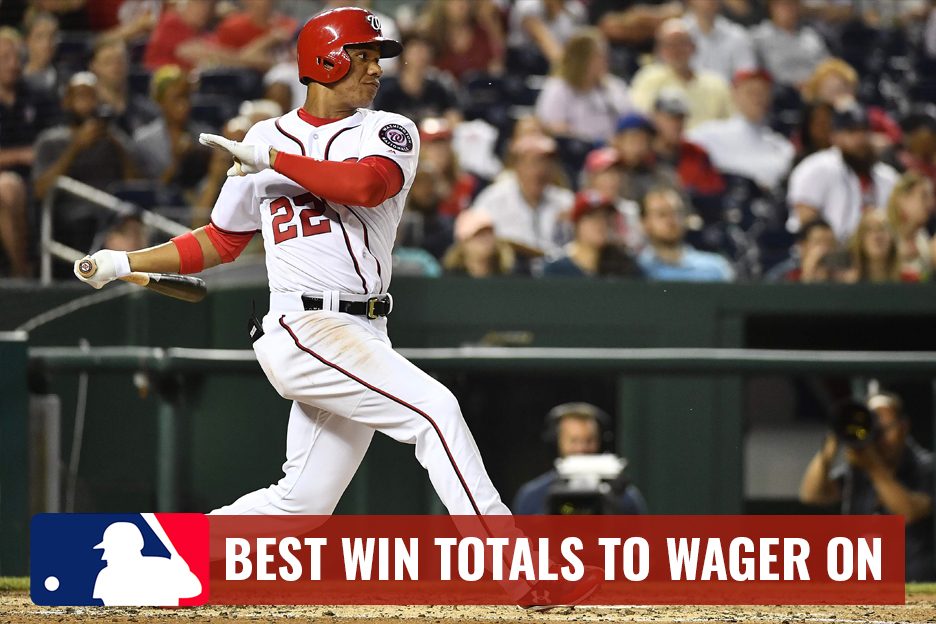 The MLB season won’t start until the end of March. But Caesars is already placing odds on win totals for the 30 teams in the league.

Among the most noteworthy are the crazy drops for teams like the Brewers, whose numbers have already come up from 83.5 to 88 since the numbers have been posted. 83.5 seemed like a crazy dip for a team that won 96 games last season.

Then there are those scheduled to rise significantly in 2019. The White Sox are expected to be one of the biggest improvers, from 62 to a predicted 75 wins. And that’s without Manny Machado having signed yet.

Well, after dissecting every single team for what they’ve received and lost this offseason, I’ve come up with five in particular. For those I pick for “over”, I expect them to do so even without another big offseason move. Same goes for if a division rival adds a key piece.

And for those I picked for “under”, I don’t expect a lot to change for them unless they magically sign a Harper or Machado.

So here are the five, starting with an unassuming bunch in Tampa Bay.

There haven’t been many sexy moves by this team during the offseason.

Getting Charlie Morton to solidify their rotation was a big get. But besides that, they really only made two minor trades based on upside. Those involved getting rid of two players, Jake Bauers and Mallex Smith, who could’ve been mainstays in the order.

With that said, the future could be very bright for what they got in return. Yandy Diaz could especially be a star considering how hard he hits the ball. If he can get his launch angle tweaked just enough, he could make a significant difference.

And the Rays farm system is ready to churn out a few more wonderful prospects real soon. They’re the best minor league system in the American League and will fill plenty of needs from within.

Getting Nelson Cruz would’ve been huge. Now that he’s gone to Minnesota, things get a bit trickier for Tampa Bay in that presumably hunt for the final wild-card spot in 2019. But at 83.5 wins, they’re a massive steal.

Baltimore and Toronto will be hurting again this year. Boston and New York will both be pushing 95-plus wins, but they did last year too. And still, the Rays won 90 games in 2018.

It’s a tough division to play in, but with Morton, this is a better team than it was last season. And if they add another piece like J.T. Realmuto from Miami, then they might be the fourth-best team in the league.

Right now, Fan Graphs has the Rays winning 86 games. While I feel that’s the bare minimum for them, that clearly puts them over 83.5. And they have plenty of money to spend on another big piece in a slow market.

The Rockies surprised quite a few people last year by winning 91 games. Not only that, but they beat the Chicago Cubs at Wrigley Field in the one-game playoff.

This year though, they lost DJ LeMahieu at 2B and replaced him with Daniel Murphy. Yes, the former had his worst year at the plate and Murphy could show pop at Coors Field. But Murphy still had -0.9 WAR last season while LeMahieu was a solid 3.0 with the best glove at 2B in the entire league.

So they replaced a good hitter with a wonderful glove for a once-good hitter who is three years older for the same amount of money. Murphy did almost hit .300 last season in 91 games, but LeMahieu was definitely the better player and the more consistent one.

And switching Murphy to first base might save the Rockies from his lackluster defense. But it still means relying on him to supply lots of power.

The potential losses of Gerardo Parra and Carlos Gonzalez won’t hurt much. But the Dodgers might be even better in 2019 and it was clear Colorado played above and beyond their potential last season.

That includes Kyle Freeland’s sub-3.00 ERA. That’s not something that can be expected year in and year out in that hitter’s- friendly park.

Only two other Rockies pitchers have done that since the inception of the team in 1993. He and German Marquez could be coming into their own. But mid-to-high 3.00 ERAs are considered good in Colorado, even for the best pitchers (like Ubaldo Jimenez a decade ago).

They’ll hit for power as always. But they’ve shed cap at second-base and are almost assured a slight decrease in their rotation.

This one still baffles me a little.

I understand the Brewers signing of Yasmani Grandal put them in playoff contention again this year. And the Cubs will obviously be in that picture as well. But the Cardinals are beyond-a-doubt the most improved team in the NL Central.

Yet, after getting hot at the end of last year and winning 88 games, they’re only picked to win one more?

This is after they added a potential shutdown reliever in Andrew Miller. And then there’s the Paul Goldschmidt trade.

Goldy adds over 30 homers and at least 5.0 WAR to this team. His OBP was .389 on a down year. But overall, Goldschmidt has been consistent over the past six seasons besides one that was injury-shortened. He’s always going to be in the running for both the Silver Slugger and Gold Glove awards.

The latter of those honors is the biggest reason why he’s a clear step up from Jose Martinez at first base.

PLEASE NOTE
Though Martinez hit .305 with the second-highest qualifying OPS+ on the team (only behind Matt Carpenter), he was dismal at first base. That’s fixed now with the arrival of Goldschmidt.

If Michael Wacha comes back healthy, the rotation may be even better this year. And as long as Miller can return slightly from the down-year he had in 2018, the bullpen looks much improved already. Even for all his struggles, his WAR was still better than Bud Norris’s, who served as the Cards closer in 2018.

When I originally saw that their over/under win total was 83.5, I thought that seemed absurd. The Cardinals’ improvements might give them another loss or two. But not a 12.5-win difference.

But from looking at this team, they were the recipients of good fortune in 2018.

WAR (Wins Above Replacement) is not a perfect statistic, but it is a pretty great one. The teams with the most WAR this year are the Yankees, Red Sox, Dodgers, and Astros. So it’s safe to say it’s fairly accurate as to who’s who in the MLB.

WAR has the current Milwaukee roster, even with Yasmani Grandal and his 3.1 WAR, ranked 18th in the MLB. They’re projected by Fan Graphs to finish 79-83. That’s behind nine other teams in the National League and trailing the Cubs, Cardinals, and even the Pirates in their own division.

Grandal is one of the best hitting catchers in the league. He may also be the best part of what is likely the worst fielding infield in the league. The Brew Crew is not re-signing Mike Moustakas (3B/2B), so it will probably stay put.

Besides Lorenzo Cain in center field, there is not a standout defensive player on the whole team. Christian Yelich is solid but not known as much for his glove work.

Those two might also be the only ones hitting over .260 this year, which means they’ll be relying far too much on the long-ball again.

Their pitching staff is loaded with guys on the back-ends of their careers. The bullpen saved them last year, but if there’s one position that’s proven to be the least stable in the MLB, it’s relief pitching.

I still think the original number of 83.5 wins was a pretty bold take. But I do see the Brewers somewhere in the 84-85 range if they can get another three guys hitting 30 bombs again this year. But that’s a big “if”.

This should’ve been a playoff team last year and wasn’t. It was only one in a string of seasons that’s ended below expectation.

But it’s hard to ignore when Fan Graphs is giving them the sixth-best record (92 wins) in the league for 2019. Even without Bryce Harper, all they need is to stay somewhat healthy.

That’s because despite losing their biggest hitter, their rotation is absolutely filthy in the best way. Max Scherzer and Stephen Strasburg are a great 1-2 punch. But now it will be a dynamic trio with Patrick Corbin (137 ERA+, 4.8 WAR) being brought into the fold.

There were uncharacteristic dives in stats and a pile on injuries that aided the Nationals’ collapse in 2018. Only two of their players reached 150 games played.

Getting a full season out of Juan Soto (.923 OPS in 116 games), a similar one from Trea Turner, and a power lift from new signee Brian Dozier, and the Nationals should be on top of the NL East.

Dozier’s 21 home runs and .215 average could spell the beginning of the end for him. But he also averaged 35 home runs in the three seasons before that, so he’s not worth counting out yet.

The Nationals could end up at 2.0 WAR or better at every fielding position aside from first base and catcher. But Yan Gomes should clean up a bit of the latter and add another 15-20 homers to a team that should already hit quite a few dingers.