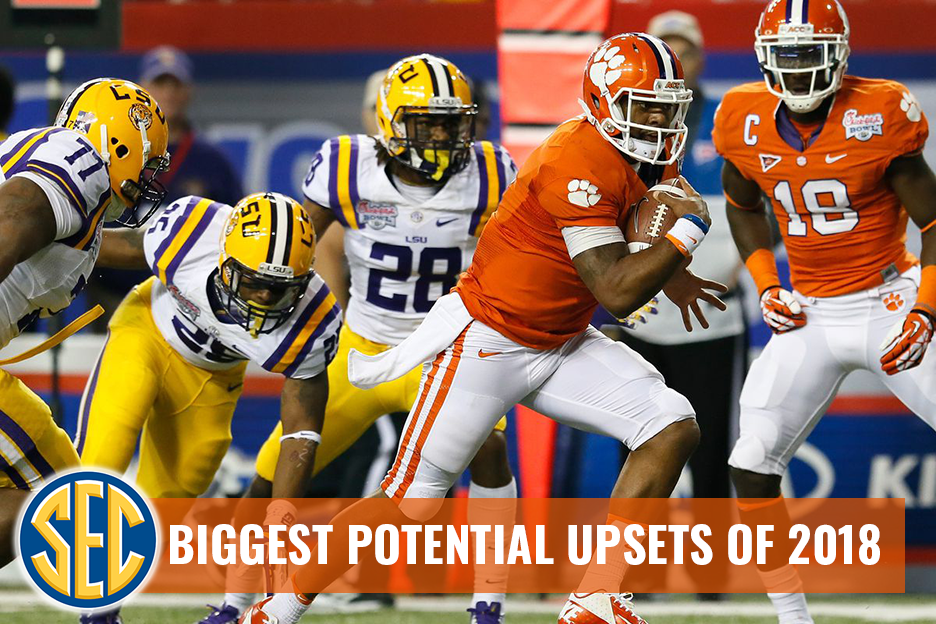 The scenario of how the SEC sorted out in 2018 was the stuff of legend.

Imagine predicting that Auburn would physically dominate both Alabama and Georgia in the regular season and then be forced to watch them play for a national championship against one another.

It would’ve seemed to defy all college football logic.

But with how wild the season can become from the very start, the entirely unrealistic must quickly be accepted as fact.

For these SEC predictions, there are many factors analyzed. There won’t be any “Vanderbilt wins it all!” headlines or “The Citadel Takes Out Bama”.

These aren’t just crazy things happening just for crazy’s sake. I’ll save those for the actual season.

Even with the LSU Tigers getting acclimated to a new offensive scheme and quarterback, the best time to play Miami might be early.

Before the Hurricanes found their groove last year, they struggled working out the kinks.

And Malik Rosier has a lot to prove after the way he ended last season too. He averaged only 167 yards and a 45% completion percentage in the last three games when finally playing tough defenses.

And LSU creates another major challenge for him and the Hurricane offense. The one-on-ones between the Tigers DBs and Miami’s wideouts should tip in the favor of the former. That leaves LSU with more opportunities to blitz Rosier and pack up the front against talented running back Travis Homer.

LSU has their own issues on offense, with very little returning presence at wide receiver and running back. But a low-scoring bruiser of a game is exactly what they’re looking for.

And despite Miami’s dominance at linebacker, LSU has the better defensive unit front-to-back.

What they don’t have is the offense to match the output of teams like Auburn, Miss State, and Georgia. Those three are too complete on that side of the ball to get routinely bested by players like CB Greedy Williams and LB Devin White.

And if Florida has even a hair more offense this season, their top-shelf corners and improved defensive front should do the rest.

LSU goes to Texas A&M and Arkansas late-season. Either of those games could be tricky with coaches Jimbo Fisher (A&M) and Chad Morris (Arkansas) having their offenses settled in.

And of course, LSU plays Alabama. They haven’t beat them in the last seven meetings. Don’t expect Nick Saban to stop haunting his former team this season.

The Bulldogs are as balanced on both sides of the ball as they’ve likely ever been.

Playing a possibly-resurgent Florida team and the Tigers back-to-back is one of the tougher one-two punches for any SEC schedule. But the power of the cowbell in Starkville, MS will be on their side for both.

Playing against their old coach Dan Mullen (Florida) will only add to the incentive for the 16 returning starters and raucous crowd. They’ll have already gained plenty of momentum from wins at Kansas State and Kentucky.

And above all else, the pressure waiting for whoever is playing quarterback for Gators will be tremendous.

Florida’s offensive line is returning a lot. That doesn’t mean they’ll have improved all that much from a unit that gave up the 7th-most sacks in the country.

Montez Sweat and Jeffrey Simmons are two of the most talented defensive linemen in the country. They’ll be a handful to begin with. And Florida’s offense isn’t necessarily going to be all that versatile either.

The Gators may not give much to Nick Fitzgerald through the air. But having intermediate connections with receivers will complement his and Aeris Williams’s legs enough to be efficient.

It’ll be a tougher road against Auburn. But not having to play at Jordan-Hare is a huge plus. But they still need to answer in a big way after being smoked by 39 last year.

Auburn won’t have quite as much of a presence up front on offense though. They’ll also be depleted at receiver after a couple of big spring injuries.

It’ll be the Tigers’ first road game of the year, one of the ruder welcomes they could have. And as good as Jarett Stidham has been, expect two future first-round DLs to really test his pocket-presence.
The Bulldogs also return the entire offensive line to combat Auburn’s’ D.

It will come down to the wire, but the Bulldogs’ bevy of veteran pieces will step up in a big way.

And what’s worse is that the Volunteers have a very unforgiving schedule.

But now add a game at Auburn and a neutral site contest with West Virginia. It seems like the football gods are out to get them.

Going to South Carolina won’t give them much of a chance either. And sweeping Kentucky, Missouri, and Vanderbilt at the end of the year isn’t going to be a cake-walk unless they’ve found some consistent offensive output.

As for Vanderbilt, their problems are well-documented. Playing Notre Dame non-conference is their first failure, and most of the SEC teams anywhere near their low level (Mizzou, Arkansas, Kentucky) are on the road.

As for putting 12 teams in bowls, it’s happened as recently as 2017. It’s a bit harder with more top-tier teams (Alabama, Georgia, Auburn, and Mississippi State) running the show. But there’s certainly a path to fit in the rest of the field.

Texas A&M, Ole Miss, and LSU will cannibalize themselves in the West, but that means they’ll share wins. Even with tough non-conference bouts (Clemson, Texas Tech, and Miami respectively), they’ll have enough favorable matchups to reach six wins each.

Same goes for Arkansas, which might come as a surprise. But Chad Morris is already gelling perfectly with his first Razorbacks team. They also have Eastern Illinois, Colorado State, North Texas, Tulsa, and Vanderbilt on their schedule. Those are all very winnable.

One win against an Ole Miss, Texas A&M, LSU, or Missouri and they’re in. Seeing them go 0-4 in those games when they’re all mid-or-late season is hard to fathom.

So is seeing a team with as many weapons offensively as Mizzou getting left out.

Kentucky is a little tougher of a sale, but they have their best chance in years to beat Louisville. They have three easy non-conference games and Vanderbilt at home.

They also handled South Carolina last year despite WR Deebo Samuel putting up 122 yards on them. The Wildcats get the Gamecocks at home too.

Last year, six SEC coaches departed from their teams. One of them, Dan Mullen, even switched teams within the conference (Miss State to Florida). It was the biggest shakeup in league history.

So how does the league follow it up after this season? By being quieter than any conference in the nation on the coaching front.

Yes, Derek Mason won’t be the most popular man after he drops another eight or nine games at Vanderbilt this year. But coming only a year-and-a-half after signing an extension, it’s hard to imagine him not at least getting a chance in 2019.

LSU will definitely be in boiling water over Ed Orgeron. But forasmuch scrutiny as the Tigers coach has been under for his lack of success, they’ll likely give OC Steve Ensminger two years to implement the young pieces on offense.

They have a whole new group at running back. Plenty of turn-over is happening at wide receiver too. And new transfer QB Joe Burrow has two years of eligibility left.

So Orgeron should get the benefit of the doubt if LSU settles around 7-5 or 6-6 this year. Even if they do so with one of the best defenses in the league, as crazy as it sounds. The Tigers’ quick-trigger firing of Les Miles has been overcompensated with too long of a leash for Orgeron.

And the only other coach of note to be on the SEC hot seat is Mark Stoops at Kentucky. But much like Vanderbilt, Kentucky’s expectations aren’t the highest from the get-go.

There always seems to be a hump the Wildcats can’t get over.

But going 6-6 or 7-5 is actually above-average for them. Stoops is pretty level with the rest of the team’s past coaches and grabbing a third straight bowl appearance would put him over the top and guarantee his return.

Alabama Has a Perfect Regular Season, Loses to Clemson

For being in the SEC West, Alabama got about as good of a deal as they could schedule-wise.

Louisville is good enough of an opener to qualify as a statement game. But without Lamar Jackson at quarterback, no one is expecting them to compete late.

The Citadel and UL Lafayette are cupcakes. Arkansas State is pesky but no match. Tennessee never beats Alabama, even when they’re good. So expect a bloodbath. It being in Knoxville is not much of a factor.

Alabama gets Missouri as their other cross-division game. Unless Drew Lock somehow throws for 500 yards on this secondary, the Crimson Tide should have no problems.

Same goes for games against Arkansas, Texas A&M (home), and Ole Miss. None of those teams have secondaries to contain Tua Tagovailoa and his talented but green receiving corp.

Sure, LSU can slow the game down all they want. But Alabama is the team that executes the best 99% of the time. The Tigers would just be looking for a slow death.

Besides that, the Tide’s two major challenges, Mississippi State and Auburn, are both home games.

Auburn will still be tough in the trenches with a premium running back in Kam Martin. But Saban never loses two-in-a-row to Auburn. And he’s 4-1 in Tuscaloosa against them, with the Tigers needing a 109-yard missed field goal return to beat him.

Clemson, on the other hand, is coming off a humbling loss to Alabama last year. And once again, they will likely match-up in the College Football Playoff. But this time, it will be in the final. And this time, Clemson has some small holes it can exploit.

By this point in the year, the Tigers will have settled on one of their dynamic quarterbacks. Whether Kelly Bryant has made another major step forward from last season, or freshman phenom Trevor Lawrence has taken over.

They have the opportunity to take down a less intimidating Alabama secondary.

Clemson also has an advantage at the defensive line. Not only are they the best in the country, they’re one of the most stacked units in college football history.

The Tigers’ offensive line will have to grow up a bit from last year’s debacle. But given another season of experience, they should be more prepared to play a slightly less-challenging Alabama front.