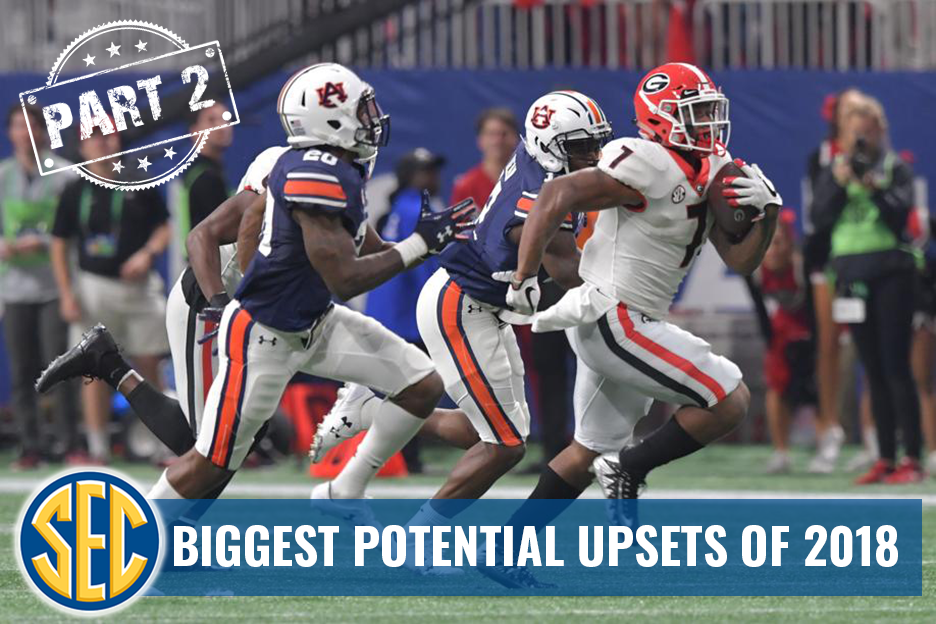 Last season, the SEC provided us with a sensational freshman in Georgia quarterback Jake Fromm and the surprising resurgence of coach Will Muschamp at South Carolina.

Seasons like theirs lay the foundation for more daring 2018 SEC predictions. The focus in part two will be on a couple of coaches on new teams. It also involves a few players whether breaking onto the scene or pushing through to the highest level of the college sport.

From Florida to Arkansas and back again, here are a few more SEC predictions that are sure to go against the grain.

Emory Jones Starts a Game This Season, Justin Fields Does Not

There’s been a lot of noise created about freshman extraordinaire Justin Fields. And it’s well-deserved, as he is one of the most complete passers to come out of high school in some time.

But to think he’ll actually supplant Jake Fromm as the starting QB at Georgia is absurd.

I know what you might be thinking. Jacob Eason looked locked-in as the starter for Georgia last year before he was injured and lost the job for good to Fromm. So why couldn’t it happen again?

Well, for one, Fromm was much more stable than Eason ever was. He wasn’t asked to do much earlier in the season but gradually was given more opportunities through the air. And did he ever deliver?

Secondly, his leadership and moxie are unmatched. This team is behind him way more than they were behind Eason. That’s probably due to the simple fact that Fromm helped lead this team to the national championship.

There’s definitely a package set up for Fields. I have no doubt in my mind that he will see action early and often. He’ll probably play most of the UMASS and Middle Tennessee State games. But he’ll never be “the guy” this season unless Fromm suffers an injury.

As for Florida, their star true freshman QB Emory Jones probably won’t see the field early. But that doesn’t mean he won’t get acclimated in time to make a few starts late in the season.

And that also doesn’t indicate that Florida’s season will be a disaster up to this point. But despite a run-game that will do wonders and a lockdown secondary, Florida will want a new dynamic to throw at FSU to finally expel their rivals.

And Jones will be just that.

Starting him the week before against Idaho would give him some in-game action. And then he’d be thrown in the Tallahassee fire.

But in reality, he’d be set up for success with game experience and a quarterback guru in Mullen behind him. He also is perfectly-equipped for this offense. The presumed starter at the beginning of the year, Feleipe Franks, certainly is not.

Nick Chubb was part of a two-headed monster in Georgia’s backfield last season. He and Sony Michel both went over 1,200 yards and were both taken within the first two rounds of the NFL draft.

So it may be hard to see anyone topping the marks (1,345 rush yards) of such a legendary back as Chubb. But between the load D’Andre Swift will be carrying and the amount of talent he flashed last year, there’s no reason to believe he can’t top 1,400 yards.

South Carolina was the only SEC East foe better than 50th against the run last season. LSU was the best run-D from last year that Georgia will play, and they only have two of their front-seven starters returning.

Swift will be sharing carries with five-star freshman James Cook and junior Elijah Holyfield Jr. That’s a foregone conclusion. Another five-star rookie, Zamir White, will probably work his way in the huddle too.

But this won’t be the kind of split that Michel and Chubb had. And Swift may eventually be better than both of them anyway. He might already be the most explosive of the trio.

No wonder ESPN has him as one of their top 35 players coming into this season.

Even with powerhouses Alabama and Georgia sending a load of talented defenders to the NFL, they’ll both reload with more All-American players.

Despite knowing that, it’s Miss State’s turn to host the SEC defensive player of the year for the first time. And Jeffery Simmons is the perfect man for the award.

He’s a veteran leader who’s versatile all over the defensive front and is easily a first-round talent. He had a dozen tackles for loss last season and still hasn’t come anywhere close to touching the ceiling his massive frame exhibits.

Technique-wise, he’s NFL-ready. Whether at defensive end or tackle, he’s explosive. Fellow DL Montez Sweat, who will be in contention for DPOTY as well, will keep the double-teams off him for at least a portion of each game.

LSU CB Greedy Williams and Bama DE Raekwon Davis will have their say in the award. But passers will mostly stay away from Williams this year, choosing to throw to the other side where there are unproven freshmen and sophomores.

As for Davis, he’s neck-and-neck with Simmons in terms of stats. Both will be opening night NFL draft picks. But Simmons has the slightly better track record and is just as powerful of game-changer against the run and pass.

It will come right down to the wire, but I’m giving the Bulldogs DL the slightest of edges.

Florida’s Dan Mullen should definitely be in contention here with a nine-win season. But Morris getting a bowl game and more out of Arkansas is even more impressive.

Out of all the decent SEC West teams (Arkansas, LSU, A&M, Ole Miss), only Fisher might be able to pull more out his talent than Morris. Especially on offense, where his focus will be.

I’ll give him seven wins this season. Their non-conference schedule has no major threats. They’ll be the favorite against Vanderbilt (home) and likely against Ole Miss in Little Rock.

And there’s no reason to think they’ll go 0-3 against A&M (who they lost in OT to last season), LSU (home), and Missouri (three-point loss) again. They could’ve easily won the bookend of the two and will be facing a much weaker Tigers team on their own turf.

Morris’s innovative looks on offense powered Clemson to great heights as a coordinator. At SMU, he led a dramatic turnaround. Who’s to say he won’t be a little ahead of schedule in Fayetteville?

This may seem outlandish considering Jimbo Fisher, Chip Kelly, and Willie Taggart were all on the move this offseason.

But Fisher inherits a team that’s not close to elite at any position except maybe linebacker. And Nick Starkel is going to be some kind of project for him. Seven wins is probably what they’re looking at. Eight at most.

Taggart has the challenge of Clemson, Notre Dame, and Miami on the FSU schedule. Virginia Tech won’t take as big a step back on defense as presumed, even with unprecedented losses. Playing at Louisville and at NC State won’t be easy either. Eight wins would be a solid first year for Taggart.

Kelly would be lucky to get seven from UCLA’s youngsters. And since I’m not sure what will happen to Urban Meyer, Ryan Day is not included in this conversation for Ohio State.

Oregon has a lot of toss-up games but won’t stretch any further than nine wins in Mario Cristobal’s first year. They miss USC but still have seven games that could be close.

Arizona might win nine since Khalil Tate and Kevin Sumlin should make a solid QB-coach partnership. But that’s their ceiling in the regular season.

Miss State is probably the number one challenger to Mullen’s record, as they’ll probably beat Florida head-to-head. But playing in the SEC West will hold them back a bit, as they will have to play Alabama. There are a few potential landmines on the schedule and a lot of fresh blood in the back seven.

So nine wins is the mark, and one Dan Mullen is in position to hit. Miss State will control the line against Florida from the defensive side of things. Georgia will do the same from the offensive end. And the Gators can’t quite get over the FSU hump, and doing it in Tallahassee will be especially tough.

With that said, the rest of the schedule stacks up quite well for Mullen. Getting retribution on South Carolina and stopping Drew Lock and Missouri won’t be easy. But this looks like a nine-win team with the forgiving schedule that they have and the prospects of finally having a heartbeat on offense.