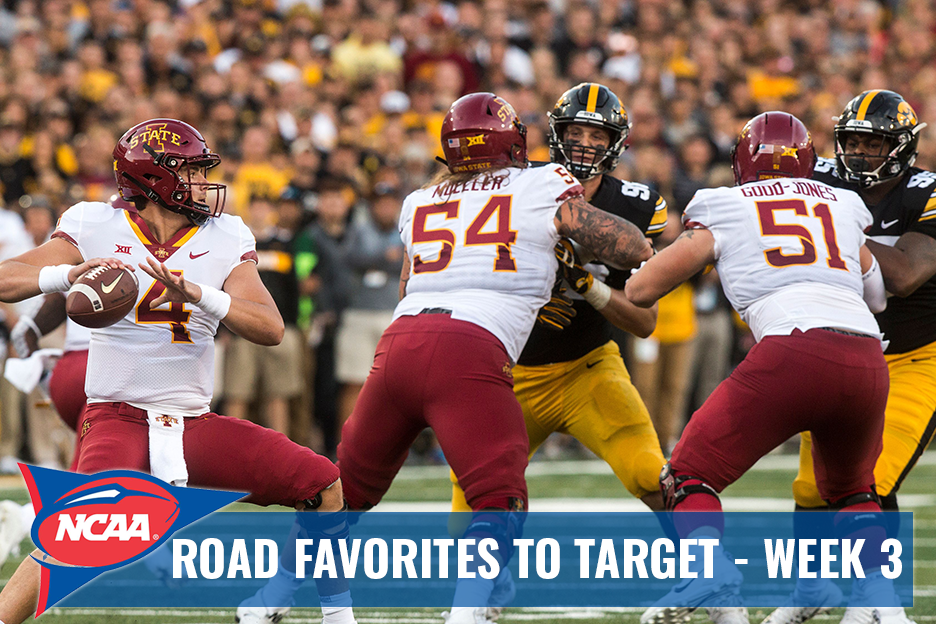 This third week of the season will help us get a much stronger take on the strengths and weaknesses of many of the teams in college football.

There are a few schools that have stood out to me already, though, and I found a few of them as favorites on the road on Saturday.

I like betting the road favorites early in the year because some of the more dominant teams haven’t had enough games to get quite all the respect they deserve from the sportsbooks.

Ohio State is one of those teams that have no problem blowing out an inferior opponent by 40 or 50 points on their own field. This week they are traveling to Fort Worth to take on the Horned Frogs of TCU, though, so I’m going to stay away from that one.

Even with their newfound respect, the Horned Frogs have played the role of spoiler quite well on numerous occasions.

Another top-five team will be a heavy favorite on the road. The Sooners of Oklahoma ride up Interstate 35 through Kansas City past longtime barbeque rivals Gates BBQ and Arthur Bryant’s on their way to play the Cyclones.

It’s a shame they won’t be able to stop over at El Bait Shop in Des Moines, Iowa to tap a keg as it boasts of the “Largest selection of draft beers in the country”.

Those fly-over states are sporting some shiny needles sticking out of the hay bales.

Just a few miles north of Des Moines, the Sooners will reach their destination of Ames.
Home of the Iowa State Cyclones for over 125 years, Ames has produced a few upsets in its day.

Will Oklahoma be able to cover (-17.5) or should head coach Lincoln Riley’s team be on upset alert?

I really wanted to jump on the West Virginia betting line (-4) as they were set to visit Raleigh for a tussle with the Wolfpack of NC State, but Hurricane Florence has other ideas as the eye of the storm may pass directly through the state capitol.

Let’s hope they get it rescheduled very soon but I have a feeling if they do, the Mountaineers will be much larger favorites.

The Crimson Tide are 21-point favorites down in Oxford this weekend. As much confidence as I have in sophomore sensation Tua Tagovailoa to lead his team to victory, 3 touchdowns is one too many for me especially considering the Rebels of Ole Miss have scored 123 points in their first two games this year.

This brings us to the beautiful state of Utah where the Utes will play host on Saturday to Pac 12 conference foe, the Washington Huskies.

“U Dub” already has faced major opposition in 2018 when they opened the season against the Auburn Tigers. Things didn’t go according to plan per se for the Huskies, but it was a hard-fought game and they definitely earned the respect of the rest of the country.

The Pac 12 needs competitive games with highly ranked non-conference opponents to give their conference winner a feasible shot at the college football playoffs this year.

Let’s get to it and break down both this game and the Oklahoma vs Iowa State matchup a bit further to see if we really want to bet on a road favorite, even if it is a top ten team.

Revenge is a dish best served lukewarm in Ames, Iowa or at least that’s the plan for the Sooners who will be looking to avenge a loss last year on their home field to the Cyclones.

Yes, these are a lot of points even for the Sooners but Oklahoma may very well be a better team only 2 games into the post-Baker Mayfield era.

Quarterback Kyler Murray hasn’t tried to be someone he isn’t and has played his game at what appears to be at the best of his abilities.

Wide receiver tandem CeeDee Lamb and Marquise “Hollywood” Brown have combined for over 400 yards receiving and 3 scores through the first two weeks of the season.

Sooners’ Defense
It’s the defense, though, that will make the biggest difference for the Sooners on Saturday as they have given up only 1 score that occurred on a contested drive a contested drive when UCLA scored a touchdown in the first quarter last week. Other than that TD, the Oklahoma defense has been lights out.

Iowa State always has some hog mollies up front on both sides of the ball. They will be big, but Oklahoma isn’t going to play that way. Their advantage lies in the speed department.

On defense, I don’t think Iowa State will have the speed rushing on the edge to corral Murray.

His weapons on the outside are just too good and he is becoming more and more comfortable in the pocket with every snap he takes.

Running-to-pass isn’t likely for the Sooners early on against the Cyclones who boast a stout defensive line and ability to stop the ground game.

Oklahoma will likely use the pass to open up the running game for the committee of backs as well as Kyler Murray.

Iowa State quarterback Kyle Kempt is banged up and may not even start for the Cyclones. Either way, I think it’s bad news for the boys in Ames.

The Sooners are trying to win every game as big as they can. They are in competition all year long to be selected to the college football playoffs.

Oklahoma pulls away in the second half to win by three touchdowns and a field goal.

Some would say this is a scary pick because statistically, the Utah Utes are the best defensive team in the nation. Well, they have played just Weber St and Northern Illinois in the first two weeks of the season.

Utah does have a solid defense and a good QB. The man under center, Tyler Huntley will have to get the ball out of his hands much quicker in week 3 than he did against NIU when he took 6 sacks.

It’s arguable that if Washington’s game with Auburn was played at a truly neutral site, they could have very well won. Give the Huskies one more touchdown in that game and a victory, and they would be double-digit favorites over the Utes this Saturday.

Quarterback Jake Browning is really showing his experience this year while running back Myles Gaskin is a highlight reel waiting to happen at any moment.

The Utes will likely keep it close at the half, but an inferior offensive line will keep the Utah defense on the field for too long. As they tire, the speed and explosive ability of the Huskies offense takes over.

Hurricane Florence looks like it’s going to be a very devastating storm for the Carolinas. Some teams have already called off their games set for this weekend.

I was really looking forward to Will Grier and the West Virginia Mountaineers traveling southeast down the Appalachian mountains to the semi-swamp of Raleigh, North Carolina. Hopefully, these two schools can figure out a make-up game or at least find another opponent for a different date.

One city I don’t think we have to worry about a hurricane cutting through it and that’s Salt Lake City, Utah, home of the Utes.

I’m still tempted but the “Two Utes” joke is getting pretty old. I’ll leave it be for a while.

Utah has more than two Utes playing well for them, though, this year. One of those players is quarterback Tyler Huntley who has completed 63% of his passes so far in 2018.

The Utes will need exceptional play from the quarterback position to win this game. They are outmatched in too many other areas.

Huntley will likely be under pressure and if he can make the quick reads and fast throws while scrambling to safety, the Utes can win.

I’m not betting on an exceptional performance when I know the Huskies will be keyed in on the Utah quarterback. The Huskies will likely employ a defensive spy to keep most of Huntley’s play within the pocket.

If the Huskies have to outgun them, they will. The line is only (-6.5), so a victory by one touchdown will do the trick.

The Sooners are much-improved on defense in 2018. Everyone is focused on Kyler Murray replacing Heisman Trophy winner Baker Mayfield and the running back by committee replacement of halfback Rodney Anderson.

The defensive improvement from a year ago will be the difference in this matchup against Iowa State.

The Sooners have also put up with a lingering taste of defeat in their mouths for a year too long if you ask the players.

Tune in and turn up for a couple road favorites to cover the spread.