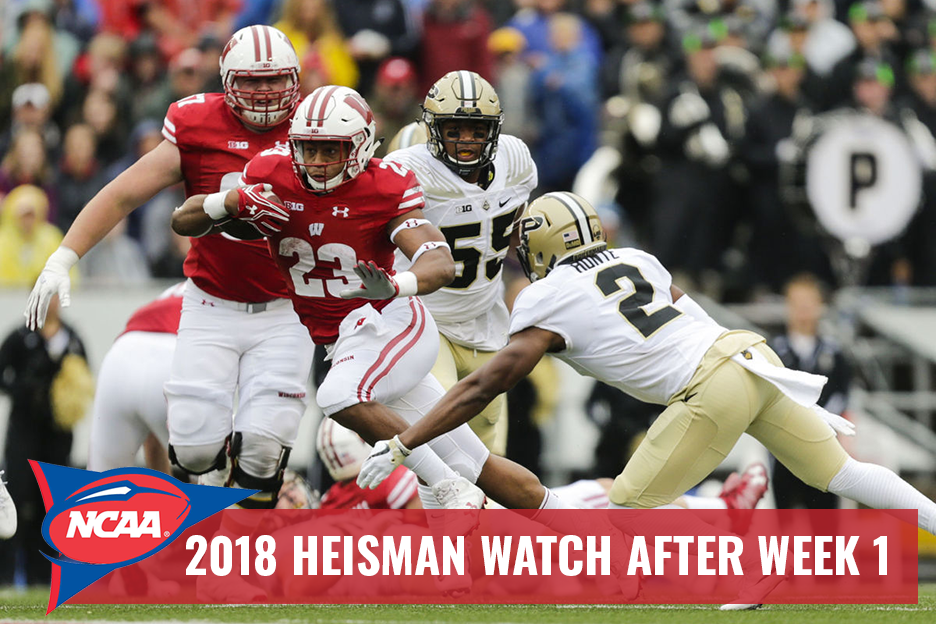 Plenty of high-profile college football players started the 2018 season with a thunderous entrance. And there are no shortages in Heisman-related headlines.

Stanford had a Heisman-worthy performance in week 1, and it didn’t come from Bryce Love. Two SEC running backs lead the power-five in rushing, and they don’t play for Alabama or Georgia.

My finalist picks Will Grier, Jonathan Taylor, and AJ Dillon are as advertised. I also have no other option but to laugh for the way my other finalists, Love and Khalil Tate, performed in week 1.

So today, I’m going to be looking at what the preseason favorites did or didn’t accomplish. But there will be more talk about who has now entered the race after week one.

With as wild as this season is going to get, expect names to come and go with regularity. Because at this point, it’s a free-for-all.

How My Favorites Performed

You can take look back to my Heisman preview for a more in-depth look into the race.

But for 2018, the finalists I chose were RB Jonathan Taylor of Wisconsin, RB Bryce Love of Stanford, QB Will Grier of West Virginia, QB Khalil Tate of Arizona, and RB AJ Dillon of Boston College. And I had them in that order. So here’s how they did in week 1:

*Odds provided by My Bookie

There was no surprise with the way Taylor performed. Racking up 145 rush yards, a pair of touchdowns, and 8.1 YPA (yards-per-attempt) is just what he does.

Although he did fumble and put up those stats against a weak Western Kentucky team, Taylor and the offensive line look just as formidable as in 2017. His patient running style was beautifully put on display once more and I’m excited to see him against better competition in a couple weeks.

Besides the near-catastrophe that was the opening of Love’s Heisman campaign, he’s still the sixth-favorite for the award.

Putting up 29 yards is cringe-worthy for those who wagered on him. Picking up 1.6 YPA is even worse to look at.

Love was playing an underrated San Diego State run-defense. There’s plenty of talent all over their squad.

But the fact Stanford had the passing game going and won by three touchdowns is a bit concerning for the running back. With that kind of output through the air, you’d expect to him to take advantage of a little more room. But the Aztecs keyed on him and stuffed him.

Still, I wouldn’t remove him from my finalist list unless he plays as poorly next week against USC. At +1000, he’s a pretty good value pick right now.

I thought Tennessee’s only chance of keeping their game with West Virginia close was through their secondary. That was their strongest position and Grier made it look like a middling group of five squad.

429 yards and five passing touchdowns later from him and the Mountaineers had throttled the Volunteers 40-14. It was the kind of performance that matched the expectations I envisioned for him. And those weren’t easy hopes to satisfy.

The way he spread the ball all over the field, airing it out deep and staying away from interception trouble, was the ideal opener. WVU will be dangerous and fun to watch this year.

And that will have a lot to do with this guy, who currently has the fourth-best odds for Heisman.

This is the part of the article where I tell you what crow tastes like.

The Arizona and Khalil Tate bandwagon I’ve been on drove straight into a ditch with their loss to BYU. And Tate’s night of being bottled up and only reaching 211 all-purpose yards was a big reason why it did.

Kevin Sumlin’s offense didn’t find the right balance to begin with. Tate had fewer rushing opportunities because of it, and that could cover up his skillset for the long-haul. But there’s no debating BYU had a game plan for Tate and executed it well.

Now, Tate—and more importantly Sumlin—will have to adjust. Otherwise, he will fall out of the race real quick out west.

The fact AJ Dillon is not an option for wagering on is disappointing.

Out of all power-five running backs last year, he had the third-most rush yards out of those returning. So even with only 98 rush yards against UMASS, there should be no reason to shoo him out of the conversation.

He had almost five YPA and looks to have more balance in his offense this year. That means fewer defenses will be able to stack the box against him. It’s also worth remembering that he has some incredible pieces across the offensive line.

Favorites I’m Adding to the Race

Now let me get to some big names a lot of pundits had in the Heisman conversation before week 1. If they had a big opener—and only if—than here they are:

Everyone is going nuts for the flying Hawaiian. Right now, he’s the favorite for the Heisman according to My Bookie’s odds. And he hasn’t even started an SEC game yet.

While I think some of the hype is premature, it’s hard to argue with the eye-test. Louisville isn’t much of a measuring stick this year, but Tagovailoa did it all Saturday night. His awareness is off the charts, his arm strength a rarity, and elusiveness incomparable.

While I want to see him against better competition, he may not see a great secondary until LSU (November 3rd) or a great defensive line until Miss State (November 10th). In that case, his stats will look good, even with the stable of runners Bama has to eat up yardage with.

Tagovailoa is likely the best player on the best team. That goes a long way in the voting.

There was no doubting Haskins had the skill to be a Heisman contender. But much like Tagovailoa, I worried overhyping and having a premier running back would hold him back just a bit.

After one week though, Haskins may be more of a focus point in this Ohio State offense than RB JK Dobbins.

After all, Mike Weber was the reason why I wrote off Dobbins, since he was going to have to share too many carries. That certainly will be the case after Weber’s 186 yards and two TDs.

But this was all against Oregon State, so it’s still too hard to know who will surface as the Buckeyes’ best Heisman hopeful. But five passing touchdowns and over 300 yards will keep Haskins in the conversation for a while.

I’ve already stated that if Herbert leaves college after this year, he will be the first quarterback taken in the draft.

And he showed shades of why with five touchdown passes and 281 yards on Saturday. But it was against Portland State. And he did complete less than half his passes, being bitten by the INT bug twice.

Herbert is still a bit of a project when it comes to reading the field and making quick decisions in the pocket. But all his natural abilities and mechanics are rock solid. He’s no more of a developmental player than first-round pick Josh Allen is this year at quarterback.

So while I don’t know if Herbert should have the fifth-best odds up to this point, he will stack up a lot of points and pad stats in that offense.

It’s time for me to make like everyone else and start paying more attention to Murray.

I may not think he’s a Heisman contender yet. And he’s certainly not in Baker Mayfield’s league talent-wise (though he’s one heck of a baseball player).

But Murray’s early look in this high-powered Sooner offense was about as good as they come. FAU may prove not to be as much of a test as some thought, but the QB was nearly perfect (9 of 11, two passing touchdowns) in week 1.

RB Rodney Anderson’s 20 YPA is what stood out to me the most. But the balance offensively is incredible. Oklahoma is going to create matchup problems throughout this season, and Murray is a big reason why.

My final group consists of the players who weren’t on the Heisman radar a week ago and should be now. No matter the projections they have for the rest of the season, these were top performers in week 1 and deserve to be acknowledged:

Every single play he made was worthy of a highlight reel. He maximized his size-difference perfectly. It’s hard to believe it was only six catches, not 16, the way he took over this game.

Texas’ Sam Ehlinger is still on the list of Heisman wagers and Oliver isn’t? That’s a crime.

The defensive lineman was a part of 13 tackles and tallied 3.5 tackles-for-loss. He was as disruptive as he’s ever been in the run-game his whole college career. It was such a dominating performance that it somehow overshadowed fellow lineman Isaiah Chambers’s three-sack night.

I don’t care if he’s on Purdue. The guy’s a freshman who was responsible for 313 all-purpose yards in his first college game ever. And he did just that with a pair of touchdowns against a sound Northwestern defense.

Purdue has never had a Heisman winner, and provided there’s not a miracle, there won’t be one this year either. But the all-freshman teams could certainly be in Moore’s future.

Yeah, he padded his stats against Northwestern State. There’s not much pride to take from that.

But Williams has long been one of the SEC’s most underappreciated running backs. And this year, the rest of the league will have no choice but to focus their game plans on him.

240 yards rushing and three TDs is great to look at. But the burst he showed at the second-level was tremendous and his field vision impressed me too.

As pumped as I am about covering so many different players, my finalist predictions won’t be budged after one week.

Arcega-Whiteside and Grier would probably be the Heisman finalists if the season were to end today. But if it did, we would have people rioting on campuses all over the country and UCF fans putting up another National Championship banner.

There’s a better chance of the season-ending after one week than Bryce Love playing a full game and getting less than 20 yards again. Right now, Love at +1000 might be worth a look as a value bet.

But the best bet for Heisman is still Jonathan Taylor at +320. He was at +850 when I picked him, and those odds will never be that good again. The Badger has too much deceptive speed, discipline, and talent on his O-line.

He won’t be fading back from the competition anytime soon.