Finding Value Bets in NHL Teams to Miss the Playoffs 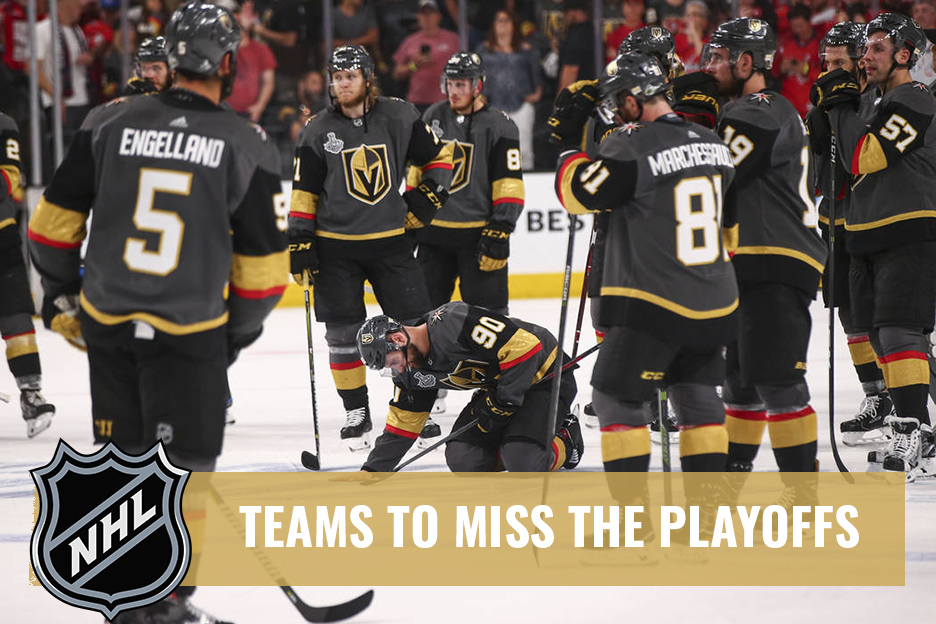 Nothing is guaranteed in sports, and sometimes we can use that to our advantage. Remember, we’re looking for value here. Something that has a realistic shot at happening with odds that could notch some quality profits.

Let’s go ahead and see if we can identify some spots where we can extract some value on four teams’ postseason fortunes.

A lot went right for the Golden Knights in their inaugural season in which they made an epic run to the Stanley Cup finals.

William Karlsson came out of nowhere to score a whopping 43 goals. However, he did that on a massive, league-leading, unsustainable 23.4% shooting percentage. He either needs to shoot the puck about twice as much as he did last season or he’s in for some serious regression here.

Marc Andre Fleury posted a 2.24 GAA and .927 Sv% in the regular season. However, those were career-high numbers. At 34 in November, can he really repeat those lofty totals? I wouldn’t bet on it.

They were remarkably healthy.
However, James Neal and David Perron are gone and blueline mainstay Nate Schmidt is out for the first 20 games of the season due to suspension. Max Pacioretty is in, but just about every player on this team enjoyed a career-year last season and aside from Neal, were very fortunate health-wise. Can every player avoid regression and stay healthy all year long again? I doubt it.

The Golden Knights are in a tough conference with just a few non-contending teams. If everything doesn’t go their way again this season, it’s going to be tough to get in the dance.

An unworldly effort from Hart Trophy winner Taylor Hall down the stretch last season willed the Devils into the playoffs, but they’re going to be in tough to make it again this season.

The Devils didn’t add anything in the offseason, but lost defenseman John Moore and winger Patrick Maroon to free agency. I don’t think this is one of those addition by subtraction situations, either.

The Devils will, therefore, enter the season with a rather thin blueline, a lack of secondary scoring up front and an unresolved situation in goal.

Late-bloomer Keith Kinkaid stole the crease from Cory Schneider down the stretch last year, but he stumbled in the playoffs before Schneider returned to the net. Schneider underwent offseason surgery and won’t be ready for the season opener, leaving Kinkaid to start. He may be fine, but he’s going to have to be outstanding. If he struggles, Schneider is going to have to be brilliant coming off major surgery.

Looking around the Eastern Conference, it’s reasonable to lock the Lightning, Maple Leafs, Bruins, Capitals and Penguins into playoff spots. The Flyers and Blue Jackets are good bets to make it back. Therefore, it could be between the Devils and Panthers, as it was last season. The Panthers win that battle in my mind, leaving the Devils on the outside looking in.

For what it’s worth, I think the Wild are a good hockey team, especially on the back end, but I just think they play in the wrong division. You can be a good team and still miss the playoffs in the Western Conference these days.

If you look at the Central Division, the Predators and Jets were the league’s two best teams last season. They’re in. Next, you have a Blues team who is arguably the most improved team on paper over the offseason. I have them in. Therefore, the Wild already find themselves fighting for a Wild Card spot with the likes of the Stars, Golden Knights, Avalanche, Kings, Ducks, Sharks, Oilers, and Flames.

Eric Staal scored 42 goals last season, but did so on a huge 17.4% shooting percentage, way above his 11.2% career rate. That number is coming down, possibly significantly. Second line center Mikko Koivu is coming off a 45-point season, the lowest point total over a full season his NHL career. At 35, his best offensive days are behind him.

Their wingers can score, but the Wild are weak down the middle on offense. Their defense and play on home ice could keep them in the mix, but there’s a ton of intra-division and intra-conference competition here.

Therefore, there’s no value in betting the Wild to make the playoffs, but I think plenty of value can be had for them to miss.

The Oilers are favored to qualify for the postseason due to the fact they have the best player in the game at their disposal, but clearly, that wasn’t enough last season.

Edmonton missed the playoffs by 17 points a year ago, and McDavid led the league with 108 points, six points clear of the second place Claude Giroux. Obviously, McDavid did not get much help from his teammates, and I don’t think he’ll get much more help this time around.

Sure, Ryan Nugent Hopkins, McDavid, and Ty Rattie are going to form a quality top scoring line. They’ve been dynamite in the preseason. Leon Draisaitl is a very good second line center, but I’m not sure where else the secondary scoring will come from.

Veteran Andrej Sekera is out long-term with a torn Achilles. Therefore, the Oilers are contemplating keeping 18-year-old 10th overall pick Evan Bouchard with the big club this season. This is just a really tough league on 18-year-old blueliners. Last season, the Oilers ranked 27th in team defense last year and 25th in penalty killing. It’s tough to see essentially the same group shooting up the rankings in either of these areas this time around.

The Oilers will very likely be one the many, many teams in the west trying to nab one of those two Wild Card spots. I don’t think they’re good enough up front behind McDavid, their special teams are poor, they’re blueline is thin and their goaltending was poor last year and needs to be elite this season.

There’s too many things running against this team to make the playoffs this season. I’m taking the miss.