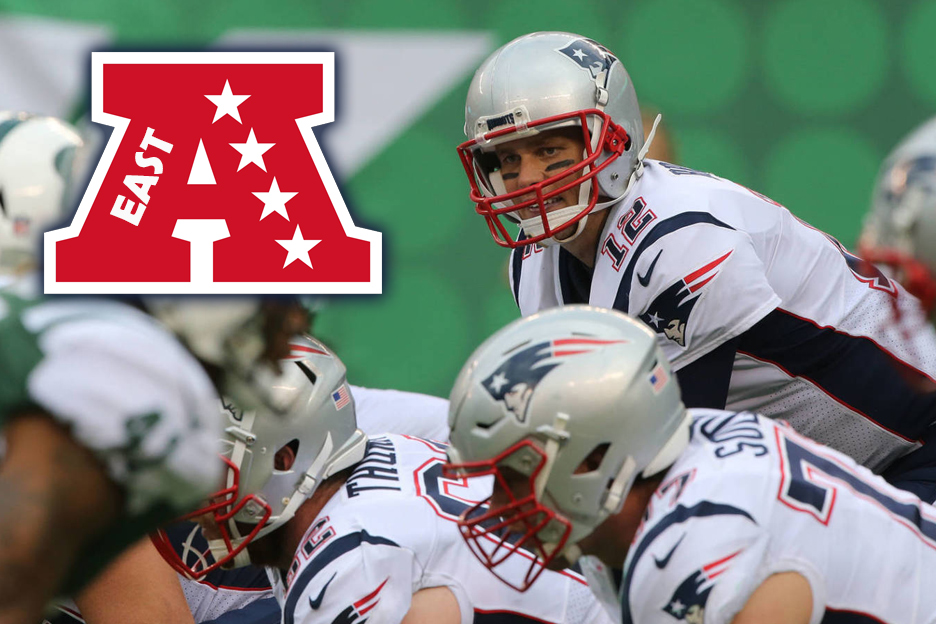 With the 2018 NFL regular season fast approaching – the first game of the year kicks off on Thursday, September 6 – it’s time for bettors to take a serious look at the futures betting market.

Anything can happen in one game, but over the course of a grueling 16-game campaign, the cream tends to rise to the top in this league. With that in mind, savvy bettors can take advantage of futures betting by pouncing on divisional title odds*, Super Bowl championship prospects, and a few fun proposition wagers based on player performance.

To help you sharpen your futures betting skills, we’ll be covering all eight of the NFL’s divisions, beginning with the AFC East.

*All odds and lines included in this page were provided by online sportsbook Bovada on August 7th, 2018.

As you can see, the New England Patriots hold their usual spot as heavy favorites to win the AFC East. Even so, it’s a four-team race until the title is clinched and the T-shirts come on, so the Miami Dolphins, Buffalo Bills, and New York Jets are all chomping at the bit to dethrone this division’s nine-time reigning champ. On that note, check out the team capsules below for a full rundown on all the AFC East action to come.

“I’m focused on doing the best I can for the 2018 New England Patriots. That’s my job. That’s what I’m going to do. That’s what I’ve always done in the past.

I’m not focused on any of those seasons. They’re done.”

Between head coach Bill Belichick and quarterback Tom Brady, the Patriots dynasty has been in safe hands for the last two decades.

Since the 2001 season, that two-headed dragon of football talent has led the Pats on a truly absurd run of sustained success. Eight trips to the Super Bowl. Five times hoisting the Lombardi Trophy. And in the AFC East, 15 division titles in 17 tries.

All things considered, it’s a wonder New England isn’t a bigger favorite to win the East than their already gaudy (-800) line suggests. Simply put, this division belongs to the Pats until Brady and Belichick hang up their respective helmet and hoodie.

And they don’t even break a sweat while dominating the Dolphins, Bills, and Jets. In the last two seasons, New England has won the East by a whopping 4-game margin – no easy feat with only 16 games to work with.

The (-800) price isn’t all that attractive, so bettors backing the Pats may be more interested in their season Win Total, which is the highest in the league at 11 (-160 on Over / +130 on Under). The last time New England won fewer than 12 games came way back in 2009, so during the current decade, they’ve never failed to eclipse this year’s Win Total.

And if you’re keen on the Pats winning an unprecedented sixth Super Bowl during this seemingly endless dynasty, they’re the league favorite at (+650). New England nearly pulled that feat off last February, falling behind before storming back to take a late lead against the Eagles, only for Brady to watch the Malcom Butler-less Patriots defense get carved up by Nick Foles’ own comeback bid.

And about that Butler benching, don’t bother asking Belichick to explain his motivations. As the quote above makes clear, the notoriously ornery coach refuses to even acknowledge his curious decision to handcuff his own secondary.

For any other franchise, a self-inflicted wound to lose the Super Bowl could easily lead to a divided locker room, and a lingering hangover that threatens team unity. Just ask Pete Carroll, Marshawn Lynch, and the Seattle Seahawks how that story goes…

But this is the Patriots we’re talking about, and with Butler long since shipped off to Tennessee, the focus is squarely on succeeding in what might be Brady’s swan song.

The ageless wonder is actually a 41-year old man, and pliability exercises aside, Brady’s body must succumb to reality at some point. Whether or not that inevitable decline happens this year is anybody’s guess, however, and based on last year’s MVP-winning performance, another elite season is a definite possibility.

For folks betting on or against the Patriots, the Brady conundrum is really the only relevant question. Belichick will have the rest of his boys ready to roll, and the team’s core returns largely intact.

But if Brady does stumble – either through ineffectiveness or injury – standout backup Jimmy Garoppolo is no longer around to pick up the slack. And the last time New England was forced to play a season (2008) without Brady under center, the Dolphins won the only AFC East title that hasn’t gone to the Pats in the last 15 years.

“I have so many braces that they had to label them somehow. I guess that’s (“Tannehill 2.0”) how they figured it out.

I was able to do everything in the spring, and it’s only gotten stronger.

At this point it’s like nothing ever happened. It’s second nature. You’re not even thinking about it.”

-QB Ryan Tannehill, on recovering from a torn ACL

Year 3 of the Adam Gase era in Miami should provide the Dolphins with clarification on the head coach’s hold on the team.

In his rookie season, Gase led a surprising 10-6 Phins squad to a Wild Card playoff berth. That brief flirtation with the postseason ended abruptly, however, as starting QB Ryan Tannehill went down late in the regular season, forcing backup Matt Moore into a losing effort in Pittsburgh.

Last season saw Tannehill reaggravate his injured ACL, tearing it in the team’s first contact drills of the offseason. With rental Jay Cutler under center, Gase watched as everything went wrong en route to a 6-10 finish.

Tannehill opted to surgically repair his ACL, and while he hasn’t suited up for an NFL game since November of 2016, he’s back and healthy for the first time in nearly two years. In the quote above, Tannehill’s confidence is clearly brimming, and from all reports out of training camp, he finally looks like his old self again.

But that just might be the problem for a Miami, who lead the East’s trio of also-rans at (+1100) to steal the division. Tannehill has been healthy before, starting all 64 games in his first four seasons with the Phins. But during that tenure, Miami went just 29-35, failing even to compile a winning record each and every year.

If the Dolphins have any shot at making the playoffs, let alone winning the East, they’ll need Tannehill to play the best football of his career.

Those low expectations can certainly be attributed to uncertainty over Tannehill’s abilities, but this team also lacks talent across the roster.

In his first two seasons on the sidelines, Gase clashed with fiery personalities like WR Jarvis Landry and DT Ndumakong Suh – and in 2018, both have been banished to other teams. Building a culture is all well and good as a coach, but pushing away two of the best players you have – one both sides of the ball to boot – doesn’t seem like a sound strategy.

Landry will be replaced by former Patriot Danny Amendola in the slot, while Suh’s attacks on the offensive line will be made by Robert Quinn. Both are mid-level replacements for All-Pro type players though, so Gase will need to get creative if he hopes to give Dolphins bettors a legitimate shot at that sweet 11 to 1 price on winning the East.

“I mean, I felt like I would’ve been even more successful if … I don’t know, man … If I would’ve … Looking back on it, I should’ve just been drafted by somebody else. I should’ve never went to Carolina.

Truly, I just think Carolina was bad for me. It was a bad fit from the get-go. If you would’ve put me with any other quarterback, let’s be real, you know what I’m saying? Any other accurate quarterback like Rodgers or Eli Manning or Big Ben – anybody! – quarterbacks with knowledge, that know how to place a ball and give you a better chance to catch the ball.

It just felt like I wasn’t in that position.”

The Bills finally broke a 17-year drought of playoff appearances last season, so it’s a bit strange to see Buffalo ranked below Miami on the East hierarchy.

But that’s what happens when a team meekly bows out of the Wild Card round with only 3 points to speak of – then trades their starting quarterback away altogether.

Buffalo will be hard pressed to repeat last year’s improbable postseason run, as evidenced by a Win Total of just 6 (+140 on Over / -170 on Under). And as for their odds to win the Super Bowl, (+15000) puts them in a tie with Miami for the second-worst in all of football.

Incoming QB A.J. McCarron will finally get his chance to shine, following an extended apprenticeship under Andy Dalton in Cincinnati. And of course, he can’t do much worse than Taylor, who specialized in 150-yard passing games as a prototypical “game manager.”

McCarron will have standout WR Kelvin Benjamin as his primary target, while LeSean McCoy totes the rock out of the backfield. On paper, that trio forms the foundation of a formidable offense, but the Bills offense mustered only 302 points all season in 2017.

It was the defense that carried the load, and they’ll likely need to do so again if Buffalo has any chance to create a more positive playoff streak going forward.

Bills bettors looking for some skin in the game don’t have much going when it comes to the East or a Super Bowl, so the best play might just be those juicy (+140) odds on winning more than 6 games. This team, flawed as it may be, did win 9 times last year, and their schedule isn’t especially difficult, so why not gamble against the big-time regression bookmakers clearly expect?

“I told him he was late.

“Josh is 1, Teddy is 2, Sam is 3. The competition has been underway, it just didn’t start today. It started Thursday when we reported for camp.

He has some work to catch up and do, so throughout the course of the preseason, that’ll take care of itself and we’ll go from there.”

The Jets are riding their own run of postseason futility, having failed to reach the playoffs for seven consecutive years.

Indeed, it’s been a long time since the heyday of Rex Ryan and Darrelle Revis, and members of Gang Green don’t have much hope on which to hang their green fireman hats.

No team in football is a bigger underdog to win their division (+1500), and the Jets are last in the league at (+20000) to win the Super Bowl. Taking fliers on those longshots is like lighting money on fire, but there may just be value in their Win Total of 6 (Even on Over / -130 on Under).

Third overall draft pick QB Sam Darnold finally made his way to camp after a protracted salary holdout, so he’s already behind the curve. And while veteran QB Josh McCown is the de facto starter, rumblings out of the Big Apple suggest Darnold could be given the reins early on.

If that happens, pounding the Under on 6 wins seems like the sharp side, given the long history of rookie starters struggling to adapt to the pro game. Remember, before Troy Aikman won his three Super Bowl titles, he went 1-15 during his rookie year in Dallas.

Darnold is no Aikman, so betting on the Jets to have another down year isn’t a bad idea if he gets the starting nod.

Futures wagers can be profitable, but many things can happen between now and when they resolve. Use this AFC East guide to help you with all of your future bets in the 2018 season.