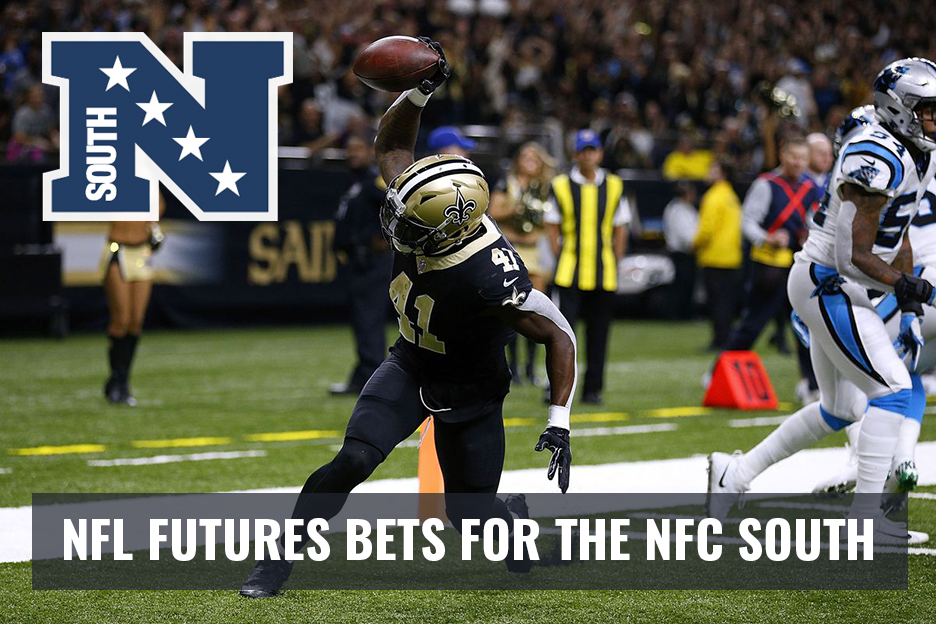 With the 2018 NFL regular season fast approaching – the first game of the year kicks off on Thursday, September 6 – it’s time for bettors to take a serious look at the futures betting market.

Anything can happen in one game, but over the course of a grueling 16-game campaign, the cream tends to rise to the top in this league. With that in mind, savvy bettors can take advantage of futures betting by pouncing on divisional title odds*, Super Bowl championship prospects, and a few fun proposition wagers based on player performance.

To help you sharpen your futures betting skills, we’ll be covering all eight of the NFL’s divisions, beginning with the NFCSouth.

*All odds and lines included in this page were provided by online sportsbook Bovada on August 12th, 2018.

Three-team races are rare in the NFL, what with four teams to a division, but the NFC South promises exactly that. Indeed, last season saw the Saints claim the title at 11-5, while the Falcons (11-5) and Panthers (10-6) took the NFC’s two Wild Card spots. The oddsmakers played this one close to the vest, installing that trio in the same order heading into 2018. New Orleans is still the team to beat, but both Atlanta and Carolina are priced at better than 2 to 1 and 3 to 1, respectively. And as for the Buccaneers, an already limited roster was dealt a fatal blow when QB Jameis Winston was suspended for the first three games of the year. Tampa Bay will be starting behind the eight ball, which simply won’t work in a division as stacked as this one. Check out the team capsules for a full guide to the NFC South race:

“I’ll be here as long as they’ll have me.
Certainly, the relationship with this city will always play a strong role in me wanting to be here and … wanting to finish my career here. We’ve been very fortunate over the years to have great guys, not only good players, but you just great leadership, great character, and great toughness across the board with our offensive line.
This group is one of the best we’ve had, in regards, to all those things.”
– QB Drew Brees, on signing a two-year deal worth $50 million to stay in New Orleans and chase a second Super Bowl title with HC Sean Payton

QB Drew Brees had one of his best seasons yet for the Saints last season, and he’s back in the fold after signing a major two-year extension.

Saints fans and bettors alike are happy to hear that too, after the 39-year old posted an NFL record 72.0 completion percentage last season. He had WR Michael Thomas and WR Ted Ginn Jr. hauling in passes, and both will be back for another run at the NFC South title.

But it was the emergence of breakout RB Alvin Kamara – who combined with RB Mark Ingram to form a formidable 1-2 punch in the backfield – that really propelled the Saints from 7-9 in 2016 to 11-5 one year later.

The whole gang is back together this year, and with offensive guru HC Sean Payton orchestrating the attack, expect to see a few 40-burgers put up in the Superdome this season.

Whether that’s enough to push New Orleans to the front of a three-team pack in the South remains to be seen. They’ll square off against a stacked deck, with their schedule ranked as the 2nd hardest in the game. And all it takes is one slip for the Falcons or Panthers to chase them down.

But with Brees’ future now secure for two more seasons, and the young core seasoned by last year’s playoff run, New Orleans certainly deserves to be the favorite out of the South. Locking them up at (+155) can’t hurt a lick, and those (+1600) odds on a Super Bowl title are attractive as well.

Remember, the Saints had their tickets booked for the NFC Championship game last year, only to see the Vikings pull out a “Minneapolis Miracle” in the closing seconds. If they can take the next step, picturing Brees hoisting the Lombardi Trophy for the second time isn’t far-fetched by any stretch of the imagination.

“He’s such an incredible player. He’s working hard.
I think he’ll pick up new [additions to the offense] quickly. We have a group of guys that are going to get together in the month of July. He’ll certainly be a part of that.”
I understand there’s a business side to this sport, too. [Julio]’s one of the best teammates you could ever be around. He’s great for our organization and team.
They’ll resolve it and get it sorted out. I’m confident he’ll be ready to go when he gets here.”
– B Matt Ryan, on WR Julio Jones’ rumored contract dispute with the Falcons’ front office, and what it meant for Jones to attend Ryan’s player’s only minicamp

Atlanta seemingly had Super Bowl 51 in the bag, only to blow a 28-3 third-quarter lead to the Patriots.

Many observers expected a hangover effect to carry into last year, but QB Matt Ryan and WR Julio Jones shrugged the awful loss off and led the Falcons back to the playoffs.

Aside from some tinkering on the defense, the same team returns for 2018, making Atlanta an easy pick to reclaim the South. At (+185) there’s clearly value to be had, especially for a team that had Super Bowl title in its grasp less than two years ago.

“Looking back on it, I should’ve just been drafted by somebody else. I should’ve never went to Carolina.
Truly, I just think Carolina was bad for me. It was a bad fit from the get-go. If you would’ve put me with any other quarterback, let’s be real, you know what I’m saying?
Any other accurate quarterback like [Aaron] Rodgers or Eli Manning or [Ben Roethlisberger] – anybody! – quarterbacks with knowledge, that know how to place a ball and give you a better chance to catch the ball. It just felt like I wasn’t in that position.”
– Former Panthers WR Kelvin Benjamin, on why his stellar college career failed to translate while catching passes from QB Cam Newton

Carolina lives and dies with QB Cam Newton, and when he’s on his game, the team can look unstoppable.

The funny thing is though, Newton’s game seems to come and go without explanation. One week he looks like Aaron Rodgers, threading darts while scrambling out the pocket. But the next week, Newton’s “Superman” persona can turn into Clark Kent in a hurry.

Newton’s inconsistency put him in the center of a preseason controversy, as departed WR Kelvin Benjamin essentially blamed his former QB for failing to get the most out of a talented team.

As a bettor, the big question surrounding Carolina’s chances in the South always center around Newton, and his decision to confront Benjamin afterward doesn’t bode well for his psyche.

If Newton isn’t completely focused on the task at hand, wagering on the Panthers to win anything of import this year is probably a fool’s errand.

“I’m sorry to the Uber driver for the position I put you in. It is uncharacteristic of me and I genuinely apologize. In the past 2 1/2 years my life has been filled with experiences, opportunities and events that have helped me grow, mature and learn, including the fact that I have eliminated alcohol from my life.
I know I have to hold myself to a higher standard on and off the field and that I have a responsibility to my family, community, and teammates to live above the platform with which God has blessed me.
I apologize to my teammates, the Buccaneers organization and fans for letting them down and for not being able to be out there for the first three games of the season.”
– QB Jameis Winston, on his three-game suspension for groping an Uber driver while visiting Scottsdale, Arizona

The Buccaneers were last season’s trendy pick to make the playoff leap, and for good reason.

But like they say, you can’t win the Super Bowl in the offseason, and the new-look Bucs staggered to a 5-11 record. Winston struggled mightily, while HC Dirk Koetter failed to get major contributions from his new offensive weapons.

You may not be able to win games during the offseason, but you can very well lose them, as Tampa will likely prove in 2018. After QB Jameis Winston become embroiled in a groping scandal, the NFL moved quickly to suspend the embattled passer for three games.

That trio of season-opening contests comes against the Saints, Eagles, and Steelers too, so the Bucs will almost assuredly be 0-3 when Winston returns.

That kind of hole would doom most teams, but in a loaded division like the NFC South – which sent three teams the postseason last year – Tampa Bay will be dead in the water before reaching the quarter pole. As such, any bet on them to win the division or the Super Bowl should be a non-starter.

The only viable wager on Tampa Bay concerns their Win Total of 6.5 (+110 on Over / -140 on Under). Given their six divisional games against top-tier playoff teams, and a schedule that ranks as the 4th most difficult in all of football, taking the Under here has to be the correct play.

Conclusion
In possibly the most competitive division on the NFL, the Saints, Falcons, and Panthers all have a chance to come out on top. The problem with three good teams in one division is they tend to beat up on each other, making the teams that don’t win the division often miss the wild card spots. Keep this in mind when making future bets.