Key Differences to Consider for NFL vs. College Football Handicapping 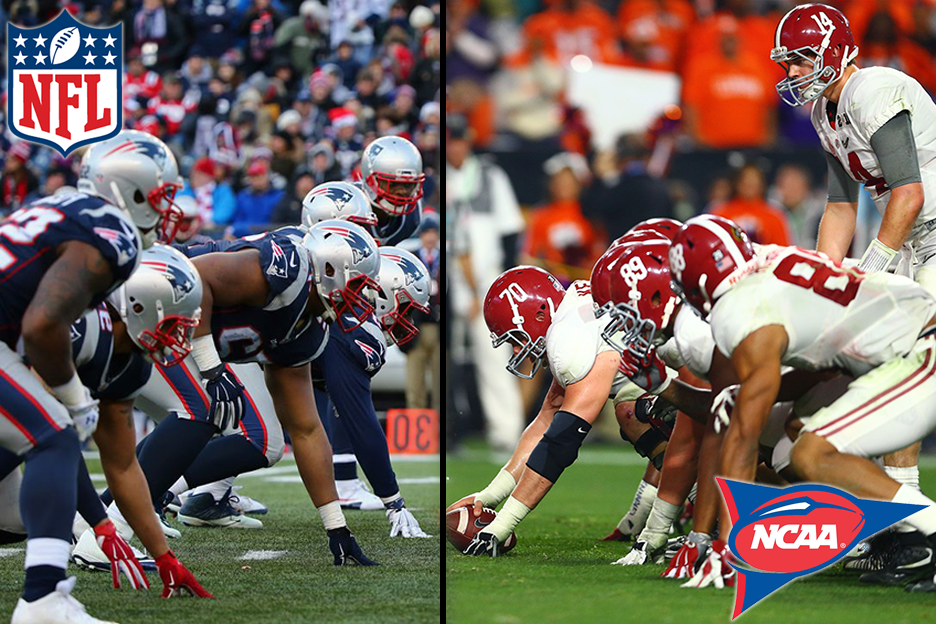 For many handicappers, the fall and winter months combine to form the most wonderful time of the year. The sports schedule is jam-packed with NFL and college football games, and that equals a ton of opportunities to locate potentially profitable wagers. While the NFL is the undisputed leader in terms of interest among both handicappers and the general public, there’s a case to be made for college football being the clear number two.

As such, there is a lot of crossover interest. Many successful handicappers are dedicated to both sports, and it’s not uncommon for them to have equal amounts of action on both during the course of an average weekend. Part of the crossover appeal has to do with the obvious similarities. A number of tenets of success with football – both on the field and at the betting window – are the same, and those with a tried and true strategy for the sport they love can find a lot of correlation between the two.

That said, there are a number of important differences to keep in mind when handicapping NFL games versus breaking down a slate of college football. Here are three of the most important to consider.

For every NFL season, there are top teams and poor teams, as well as a bunch in the middle that can easily play up or down to their level of competition in a given week. However, the gap between the top and bottom in the NFL is really not as stark as it appears. Things such as injuries and turnovers can easily swing an individual game, not to mention the trajectory of a team’s entire season. In general, the NFL is built for parity, and the phrase ‘any given Sunday’ proves to be applicable plenty of times through the course of an average season.

The same can’t be said about the talent disparity in college football. The best programs attract the best players, and they tend to be powerhouses on the field as a result. Smaller schools and those that have had a bad run in recent times generally aren’t as fortunate on the recruiting front, and that will typically carry over into their overall performance. On the average weekly college football schedule, there are plenty of mismatches that can be exploited by handicappers with a keen eye.

Upsets happen in college football as well, and nothing can be sweeter than being on the right side of one of them. However, the top programs are the top programs for a reason, and they’re going to win out more often than not over inferior competition. That doesn’t mean there won’t be favorable situations for bettors to exploit – i.e. point spreads, totals – in these mismatches on paper, but it’s imperative to keep in mind how much the talent gap can impact the game flow and script while doing weekly research.

There are situations that are ripe to be exploited in the NFL as well, but the lack of a massive talent gap has to be considered when you are determining your confidence level for a specific wager. One bounce or key injury can legitimately alter an entire NFL game, while a top college program can likely overcome a similar situation when facing lesser competition.

2. There Are No Secrets in the NFL

The sheer popularity of the NFL makes it incredibly challenging to find useful nuggets of information that aren’t common knowledge. That hasn’t always been the case. Many moons ago, the top NFL handicappers were able to maintain a significant edge via having access to an information flow that wasn’t readily accessible to the average bettor. Fast forward to today, and that is clearly no longer the case. News surrounding the NFL is a cottage industry in and of itself, and it’s incredibly rare to see a major tidbit that doesn’t quickly get passed around and disseminated the on the internet, television and social media.

The story is a little different when it comes to college football. While the major programs are part of the national sports conversation, the same can’t be said for smaller schools.

For example, if there’s a big injury or suspension for a key Alabama or Ohio State player, that information is going to quickly become common knowledge. If the same situation comes to pass with a top player at a school such as Florida Atlantic or Northern Illinois, that won’t necessarily be the case.

Tuned in handicappers will certainly be all over that information, but the average bettor can have a hard time keeping up on news that’s not readily accessible. As a result, there is an edge to be found by staying abreast of the news surrounding smaller schools and less-popular programs. This edge can sometimes carry over into the lines of the games themselves, as information that would move the line on a game with a more popular school may not do the same for games between schools with less of a following.

To be clear, there can still be an information edge to be found in handicapping NFL. Many bettors will not give enough weight to major pieces of information, and that can impact their wagers. Seasoned handicappers aren’t going to make that mistake, as they are well aware of which pieces of information really move the needle. The same applies for the top college bettors, especially when you factor in the challenges of the information flow.

For an average NFL week with no teams on bye, there are only 16 games. That pales in comparison to college football, as bettors have dozens of games to choose from on a weekly basis. In the heart of the college football season, there are games mid-week, on Thursday and Friday, as well as an entire slate on Saturday to pick and choose games from. Quite simply, there’s no comparison between the two on the sheer number of opportunities available during football season.

Due to the relative scarcity, it’s not a reach to suggest that every NFL game is an event. As a result, each game will attract a ton of action. Over on the college side, you can certainly expect the national television games to pull in a similar amount of wagers, but the same can’t be said for the average game. While there will always be some random games that attract a ton of interest from sharps and squares alike, there are also a lot more chances to find a game that’s flying under the radar in college.

By extension, the interest level on the individual games can become apparent as you study the lines on a weekly basis. For the NFL, the lines have a tendency to be pretty tight. Discrepancies are brought to light quickly after the week’s opening lines are released, as the sharps will hammer them and cause the various books to adjust course as a result. The closer it gets to game time you get in the NFL, the less likely it is that you will find a blatantly exploitable situation.

In college, it’s the opposite with the exception of the games with a huge level of national interest. Seasoned handicappers can scope out the value opportunities in the less popular games as the week evolves, and those that don’t capture the imagination of the betting public will still be ripe for the picking as kickoff approaches. This all ties back into the information flow as well, as average bettors can find it to be incredibly tough to keep on top of all of the news for an enormous weekly slate of college football. It’s not quite as difficult with the NFL, both due to the smaller number of games and the fact that key pieces of news quickly make the rounds.

There are additional differences to keep in mind the deeper you get into handicapping, but ingraining these three key ones into your memory will help you approach football season with a much clearer mindset. In fact, they just might be the difference between a profitable NFL and college football season and one which you wish you could have back.