May-Pac 2? If the Fight is Signed, Will the Result be Any Different? 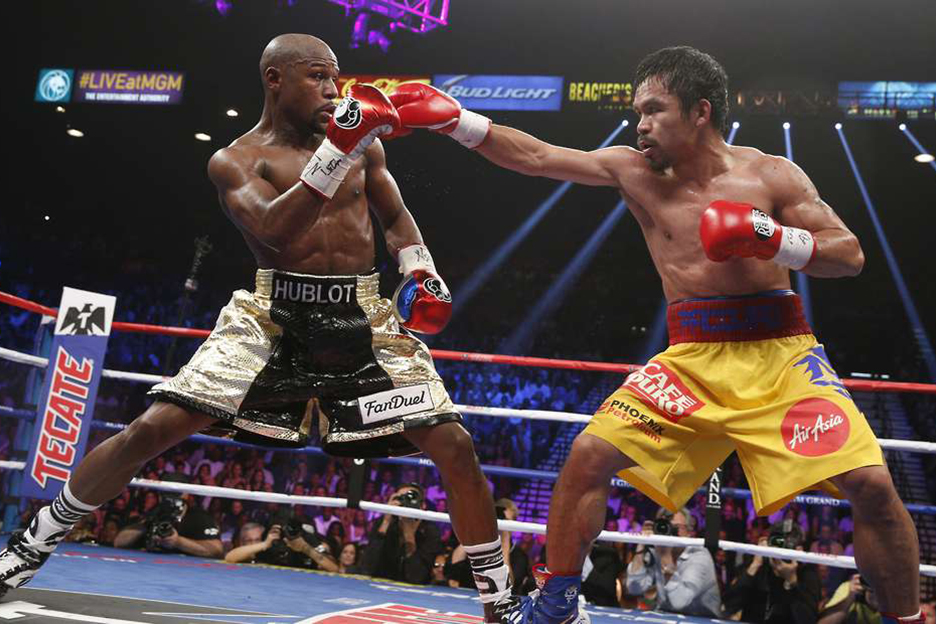 It’s hard to believe that it was over three years ago when these two finally met inside the ring. I remember this fight very well. Floyd was pretty dominant in most of the exchanges although Pacquiao was able to catch Mayweather with some lead left hands.

The result of their first fight was originally quite surprising to me as I always thought Manny could be Floyd’s kryptonite. He covers so much distance when he blitzes forwards with power shots while Floyd tends to pull and/or roll with his opponent’s power punches which can leave a fighter to far on their heels.

I didn’t foresee Mayweather moving his feet as much as he did to get out of the way of the charging bull from the Philippines. Because of this strategy, Floyd wasn’t able to counter as much as he normally does but it prevented Manny from ever getting going.

The longtime promoter of Manny Pacquiao, Bob Arum, has come out with a respectful concise statement regarding his potential involvement if these two men fight again. Arum said that he wanted no part in promoting a fight between these two. He emphasized that he is more concerned about promoting fighters in their prime, and you have to respect that.

Recently, there has been talk of a rematch between the two boxing legends and the two middle-aged men “happened to run into each other” at an EDM music festival in Tokyo, Japan.

The possibility that this meeting was happenstance is about as believable as Floyd Mayweather entering the Octagon and fighting under an MMA ruleset.

These two have definitely been in talks to rematch for a while now, and they wisely chose Tokyo, Japan as the setting to announce they will fight once more. Manny Pacquiao is a global superstar, especially in Asia, so you can consider the press tour underway.

I love the timing of it too. On the heels of one of the best rematches (GGG-Canelo) the world of boxing has seen in the last 30 years, Mayweather comes out of nowhere with this announcement. It’s great.

The two men engaged in a short but sweet war of words as Manny said “I have the belt” and Floyd responded with “I don’t want any shoulder excuses this time” regarding Pacquiao’s claim of a torn right rotator cuff going into their first matchup in May of 2015.

The match is believed to be set for Christmas time when most of the world will already be glued to their televisions for one reason or another.

Let’s go through the rest of our progressions.

We know who is going to fight.

Where? We can assume the fight will be held at the T-Mobile Arena on the Las Vegas Strip. Their first fight was at the MGM Grand Garden Arena across the street, but that was before construction was finished on the new Arena.

Floyd doesn’t fight outside of his city and with Mayweather Promotions organizing this thing, you can bet the fight will be in Sin City.

We know the who, what, when, and where.

I think we all know the answer to that question. You don’t even have to look any farther than the name of one of the participants. Floyd “Money” Mayweather has come out and said this will be another 8-figure payday as each fighter made over 100 million dollars in their first bout.

It can be argued that Manny Pacquiao wants this fight because of how bad Mayweather made him look in their first meeting. While I don’t see Manny having a big ego, he is a competitor and a win over Floyd at any age would do more for his legacy than beating any up-and-coming fighter.

There are odds on a potential winner online now. They will likely move considerably in the near future if this fight is signed.

Let’s now break down their last meeting and predict how the second meeting will play out.

At first glance, my instinct tells me to jump all over this!

Floyd Mayweather is 50-0. He doesn’t call himself “Money” just because he loves money or gets money. Floyd is “Money”.

If you aren’t familiar with the gambling term “Money” placed on a winner or winning team. They are money.

If you’ve ever seen the Las Vegas-based Vince Vaughn comedy Swingers, you definitely understand the term.

Everyone in the history of time that has ever bet against Floyd Mayweather Jr has lost and where else can you find your “money” bet or a sure winner in Vegas as easy as this?

I’ll admit Conor McGregor sold his fight with Floyd Mayweather better than I could ever imagine because he had me believing he was going to win while Floyd was “Money” the whole time.

At May-Pac 1 we saw that Manny, even though he holds a power advantage, is the smaller man and needs to cover distance in order to effectively land punches.

Pacquiao isn’t a counter fighter and isn’t the type to circle with a flickering jab. Manny likes to be the bull or the train that is coming down the tracks with maximum force.

Because of this predictable aggression, Mayweather was able to play matador jabbing effectively and staying out of Manny’s attack range.

Manny Pacquiao had a torn rotator cuff in their first meeting and it was fairly evident as it limited his attacks with his lead right hand.

I fought a Muay Thai fight once with a partially torn rotator cuff on my lead arm. It will definitely slow you down. Manny’s whole game is predicated on speed and explosiveness, and an injury like that is a major hindrance to a fighter’s ability to punch as well as defend.

We don’t know the current health of Manny’s shoulder but with all the advancements in modern medicine like stem cells, we can safely assume the man who made 100 million dollars in one fight can afford the best care.

If both guys are 100%, will the result be any different?

I don’t believe so.

As fighters age, one of the first things to go is speed and one of Pacquiao’s biggest strengths is his speed.

Cardio slows down next and Manny is built and fights like a sprinter, not an endurance based cardio-first fighter like Floyd.

Next goes your chin. Floyd has never even been dropped inside of the ring, while we will never erase the memory of Manny lying face down after Juan Manuel Marquez caught him coming in with a right hand.

None of these factors are on the side of Pacquiao. The only thing he has going for him is he has been more active than Mayweather in the last three years fighting 4 times since their first meeting while Floyd has only been in there twice.

Technically, Mayweather is a better boxer and he showed that in their first fight. I’m very surprised the odds opened as low as they did.

Just a couple days after boxing fans were treated to a razor close war between now lifetime rivals GGG and Canelo Alvarez, Floyd Mayweather and Manny Pacquiao are dominating the headlines.

These two are very close to a deal that would have them fight in December in Floyd’s home city of Las Vegas.

This is a golden opportunity for Pacquiao and his fans to gain retribution after Floyd won a fairly boring decision in their first fight back in May of 2015 at the MGM.

This fight is also a big opportunity for Floyd Mayweather.

Really? He broke Marciano’s record and retired 50-0! He has also already beat Pacquiao quite convincingly.

Floyd’s 50th win will always be brought into question by boxing purists, though, as he beat an MMA fighter in McGregor who had zero professional boxing experience.

I predict Floyd Mayweather to win in a similar manner as he won before. Manny’s shoulder will likely be better, but unless he’s taking a needle to his backside, he will be slower.

Mayweather is the larger man with a longer reach. Manny will lay it on the line but I can actually see Floyd hurting him on the way in. It may not be as dramatic as the aforementioned Marquez knockout, but Floyd can hurt him.

Mayweather all the way.