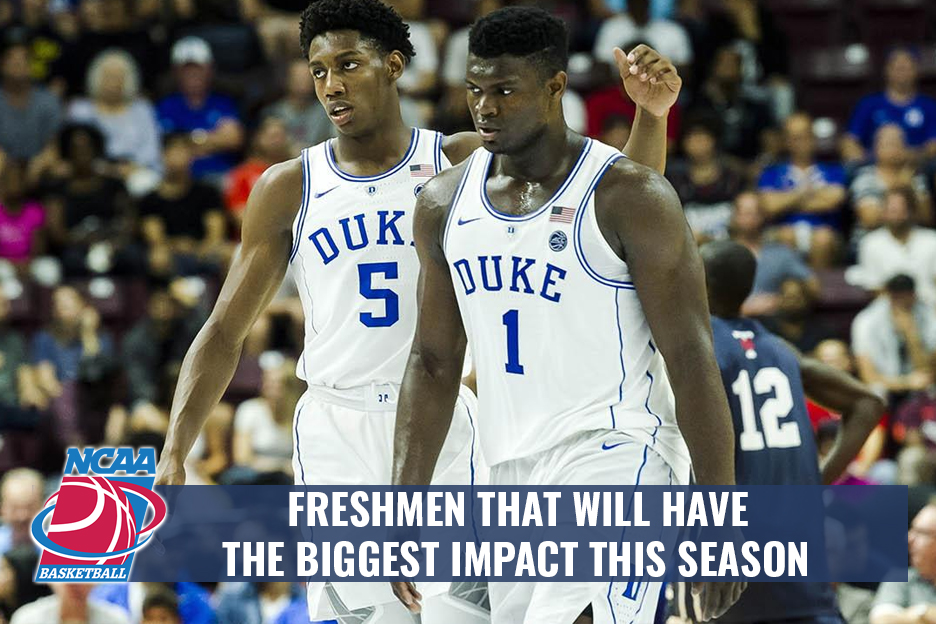 In this article, we will be discussing which are the top five freshmen that will have the biggest impact this year in NCAA Men’s College Hoops. This year’s incoming freshman class is being touted as one of the best ever, and here we will break down the best of the best. Let’s get started! 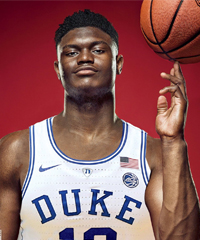 It seems we have been hearing the name Zion Williamson now for most of the last decade, and the kid has yet to even play an NCAA game!

Williamson has been a fixture in high school highlight reels seemingly forever, and he comes into this season as the most hyped high school player in recent memory. Williamson has an absolutely monster body as he clocks in at 6-7 285 pounds. The man-child looks like a grizzled NBA vet already at just eighteen years old.

Despite his huge size, Williamson is scary quick and has legit handles. He can jump out of the gym and is a matchup nightmare at the college level.

It is hard to overstate just how talented this kid is as he has received so much attention, and at every stop, has never failed to impress. If Williamson lives up to his potential, he has a shot to be just the fourth player ever, and first since Anthony Davis in 2011, to take home the national player of the year award as a freshman. The last player that had this much hype coming out of high school was Lebron James, and we all know what he has gone on to do. 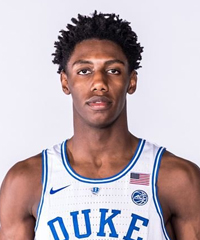 Zion Williamson might be the guy stealing all the headlines of this recruiting class at Duke, but it is RJ Barrett that is the consensus top incoming freshman in the country. Barret was the Gatorade National Highschool Player of the Year last season and was also a McDonald’s All-American. Barret has great size at 6-7 and is drawing comparisons to NBA stars like Dwayne Wade.

The Duke freshman class is one for the ages with four five-star recruits and three of the top five players in the country, but don’t be surprised if it is Barrett that emerges as the best player of this elite bunch.

Barrett is expected to be the main ball handler this year for Duke, and some projections have him scoring more than twenty points a game. It is hard to predict just how well this freshman class will mesh with so many elite guys all on the floor at the same time, but on paper, Barret should be the lead dog for a team that many are expecting to make the Final Four.

PLEASE NOTE:
Williamson certainly leads the incoming class in dunks and highlight reel plays, but it is Barrett that grades out as the best player in the country heading into the season. 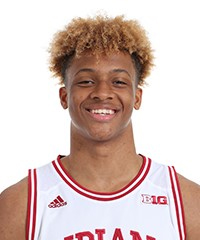 Romeo Langford is being touted as the savior of Indiana basketball. Langford is a homegrown star and passed up playing at several major out of state schools to stay home in Indiana, and the hype around this guy is only surpassed by Zion Williamson at Duke.

Langford has been named a preseason All-American, something that doesn’t happen often for incoming freshman, and has also been tabbed as the preseason freshman of the year in the Big 10.

Depending on which ratings system you look at this guy is somewhere right around the top five in the nation in a recruiting class some are calling the best ever.

The former Indiana Mr. Basketball is expected to be a one and done guy for the Hoosiers, but head coach Archie Miller is hoping he can ride Langford and Juwan Morgan to the Final Four and put Indiana back on the national basketball map.

There will be a lot of pressure on Langford to perform this season and the 6-6 215-pound Langford seems more than up to the task. Langford showed what he is capable of in one of Indian’s early season scrimmages when he dropped a double-double on Loyola-Chicago, a team that made a run to last year’s Final Four. 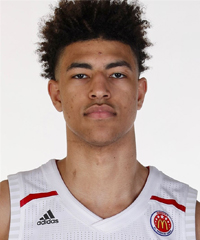 This might be the best team that Bill Self has ever coached at Kansas, and that is saying a lot considering some of the teams they have had in Lawrence in recent years.

And that is just what Grimes is expected to do this year. Grimes is a 6-5 200-pound shooting guard that is a top ten player by every recruiting measure this year.

Grimes attracted offers from big-time programs like Kentucky, Arizona, and Texas before signing with the Jayhawks.

It will be interesting to see just how Self uses Grimes this year as he has a wealth of talent and experience, he can lean on. If Grimes emerges as the main ball handler and best player on this Kansas team, he is a lock to be a lottery pick in next year’s NBA draft. 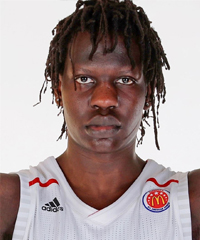 Bol Bol is another guy that we have been watching for several years as he is the son of former NBA star Manute Bol and has his dad’s signature body. Bol comes in at 7-3 with a 7-8 wingspan. The big man joins an Oregon team that just might be sneaky good this season and should be the starting center for the Ducks.

Bol attracted interest from just about every major program before signing with the Ducks including interest from blue blood programs like Kentucky, Kansas, and UCLA. So, don’t let the fact that Bol is playing in Oregon distract you from the fact that this guy is a major prospect.

Bol comes out of basketball powerhouse Findlay Prep in Nevada and is the nation’s four highest-rated recruit and the top center in the country.

But what makes Bol unique is that despite his enormous size, he is not your typical back to the goal post up center.

Bol has a legit stroke from deep and can stretch the floor better than any big man in recent college memory.

We saw what a big body in Deandre Ayton was able to do last season in the Pac-12 as Ayton dominated the league enroot to becoming the number one overall pick in the NBA draft last year. And Bol has just as much athleticism, and it wouldn’t shock me to see similar results out of Bol this year.

I mentioned above that this is one of the deepest recruiting classes in the country so, I can’t stop at just five players in my rankings! This class is just too loaded with talent to leave these following players out, so I will give you a couple more super frosh to keep your eye on!

It is hard to get overlooked when you are the consensus number two overall freshman in the country and a five-star recruit, but that is just what has happened to Cam Reddish at Duke this year. The Blue Devils are so loaded with talent that Reddish has seemingly taken a bit of a backseat in the hype department to both Zion Williamson and RJ Barrett. But don’t sleep on Reddish. Coach K may have the 6-8 218-pound shooting guard play a more complementary role for the Dukies this year, but he is certainly one of the most talented incoming players in this class.

It would be a travesty not to mention at least one of what is the second-best recruiting class in the country this year for Kentucky. If it weren’t for Dukes borderline absurd recruiting class, we would all be talking about Coach Cal’s crop of talent in Lexington. The Wildcats feature four five-star recruits, tied with Duke for the most in the nation this season. EJ Montgomery and Ashton Hagans both outrank Johnson just slightly, but it is the 6-6 216-pound Johnson that most expect to be the standout star of this stellar incoming class at Kentucky.

Nobody does the one and done better than Calipari, and this might be his best group yet. We will see just who’s class is best as Duke and Kentucky kick off the season on November 6th!

Roy Williams always manages to attract a top recruiting class and this year is no different in Chapel Hill. The gem of the class this season is Nassir Little. Little is expected to take over for Theo Pinson as the Tar Heels go to defender and rebounder at forward.

Little was the MVP of the McDonald’s All-American game his senior year and proved that even when playing against the best of the best, he stands out.

The 6-6 220-pound little is the number three ranked recruit in this year’s class, and I only dropped him to the honorable mention section because of how loaded the Tar Heels are this season. North Carolina has a ton of upperclassmen and Little, while being likely the most talented guy on the Carolina roster, is going to have to fight his way onto the court.

Roy Williams doesn’t generally cut his freshman to the front of the line, but Little is so good, he will make Williams change his ways and start him.

As you can see this freshman class is absolutely loaded! Duke sticks out as the best in the business, but don’t sleep on these other team’s freshman, as everyone on this list is going to be a difference maker for their team this season. If you were to fast forward to next year’s NBA draft, don’t be shocked to see these guys dominating the lottery!