NBA Rookie of the Year – Favorites and Sleepers 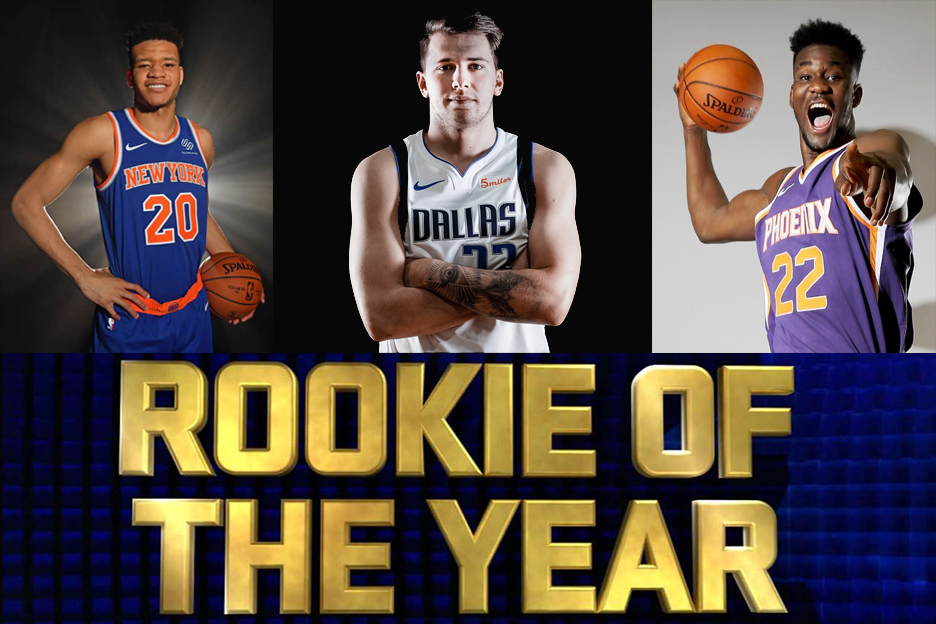 With the beginning of the NBA season just around the corner, rookies are about to get their first taste of NBA action and the crowds and media are hungry for the headlines and action shots of their seemingly limitless potential to hit the news.

Rookie of the Year is an incredibly important award in the life of a young basketball player, considering the legacy of the award winners and the careers they ended up having in the NBA. The likes of Michael Jordan, Patrick Ewing, David Robinson, Shaquille O’Neal, Chris Webber, Grant Hill, Jason Kidd, Allen Iverson, Tim Duncan, Vince Carter, Pau Gasol, LeBron James, Chris Paul, Kevin Durant, Blake Griffin, Derrick Rose, Kyrie Irving and Damian Lillard have all won the award, and they are the cornerstones of the league for the last 3 decades.

I have prepared a blog about the upcoming rookie class which includes phenomenal talents like Luka Doncic, DeAndre Ayton, Marvin Bagley III, Jaren Jackson Jr., and Trae Young. If you would like to know which players have the best chance to win the NBA Rookie of the Year award this season, this is the right blog for you.

Slovenian wunderkind has made the jump to NBA and left Europe and Real Madrid behind. A mercurial talent that has played professional basketball since the tender age of 15, Doncic has a phenomenal offensive skillset both as a scorer and a creator. He is the most accomplished nineteen-year-old in the history of basketball, winning multiple MVP awards with both his club Real Madrid and the Slovenian National Team, in the second-best league outside of the NBA.

Doncic seems a perfect fit in the Dallas Mavericks system, playing alongside Dennis Smith Jr., DeAndre Jordan, Harrison Barnes and under the leadership of the great Dirk Nowitzki. The team desperately needed another ballhandler and a creator to go along with Dennis Smith Jr. and they have found an elite one in Doncic. Doncic can also play any position from the point guard to the power forward, and this flexibility will be a great asset for a creative coach such as Rick Carlisle.

Even when not putting up elite scoring numbers, Doncic impacts the game in a meaningful way with his creation, rebounding and leadership. He is mature beyond his years and has shown magnificent composure under pressure in big games.

Doncic should hit the ground running in the NBA and this is why he is the leading candidate for the Rookie of the Year award, along with the next guy on this list.

DeAndre Ayton is the 1st overall pick in the 2018 NBA Draft and the potential savior of the Phoenix Suns franchise. By selection Ayton with the 1st pick, Suns’ leadership and new coach Igor Kokoskov have shown an incredible amount of belief in Ayton’s talent and work ethic to be the cornerstone of their franchise in the future. Kokoskov could’ve gone with the devil he knows Doncic, who he has coached with the Slovenian National Team, but has ultimately decided that Ayton is their future.

Phoenix Suns have been awful in the last several season and have completely rebuilt their franchise with young talent. Their roster includes Devin Booker, Josh Jackson, Dragan Bender, Mikal Bridges, De’Anthony Melton and now DeAndre Ayton, all under the age of 25 and supremely talented. Ayton should get plenty of room in this Suns team to develop and become a focal point of the franchise.

I am not as high on him in his first season, mostly due to the lack of creation on the Suns roster. He is, after all, a big that needs to be fed and utilized through elite PnR play. Still, I expect him to be up there solely based on his physical tools and scoring potential down low.

For many, Kevin Knox’s place on this list might be a surprise, especially considering the lack of hype around him before the beginning of the 2018 NBA Draft. Knox has landed on a bad New York Knicks team that is in the middle of rebuilding and opening cap space for potential free agent signings next summer. In addition to that, team’s lone superstar Kristaps Porzingis is coming off a serious knee injury.

While all this points to a bad season for the Knicks and another high pick in the 2019 NBA Draft, this actually might benefit Kevin Knox. He will be given plenty of room to play and develop with the Knicks, without the heavy pressure that the likes of Doncic and Ayton will be put under. He is not nearly as polished as the previously mentioned guys but he has the right tools for a modern forward to excel in the NBA.

The combination of his upside and a long leash of playing for a bad team, makes him an intriguing prospect for the NBA Rookie of the Year award.

The King has left Cleveland and the franchise is once again facing a rebuilding situation. Most of the Cleveland Roster was built to fit around LeBron James and his skillset and therefore it will be difficult for them to replace him. Cleveland has decided to go into another direction and focus on bringing more young talent to their roster, putting aside the previous model of success with LeBron.

The product of that philosophy is the supremely athletic guard Collin Sexton. Sexton has demonstrated elite ability to score at the rim and penetrate at Alabama and that skillset should translate well to the NBA. His jumpshot needs work and consistency but he will also have an extremely long leash and room to improve as he plays.

He won’t have a lot of help around him with the current roster but should still be considered as one of the favorites for the Rookie of the Year award, due to his tremendous upside and plenty of playing time on a bad team.

Marvin Bagley III is another case of a talented kid on a lottery team that will struggle for most of the season. The Kings will be one of the few teams that don’t have a realistic chance of making the playoffs in the Western Conference. Yet, this might be a great chance for Bagley III to make an impression on the coaches and the fans during the season.

The Kings lack a good scoring wing that they can pair up with a trio of their young guards/wings in DeAaron Fox, Bogdan Bogdanovic and Buddy Hield. Bagley III is very athletic and can play well face up to the basket or run the floor in the transition. He will have plenty of room with the Kings to showcase his talents.

Although he might not be a first-tier favorite for the NBA Rookie of the Year award, Bagley III has great potential and could put together a season worthy of the RoY award.

Despite being the No. 4 overall pick in the 2018 NBA Draft, Jaren Jackson Jr. has slowly disappeared from the media coverage. He was considered a consensus no-miss prospect in the 2018 NBA Draft but the issues of team fit and position where he will play have created some concerns regarding his short-term success in the NBA.

Jackson Jr.’s defensive potential fits well into the system that is already in place at Memphis so that should be of little concern. Offensively, there are issues. Jackson Jr. is primarily a great PnR finisher at the rim and a spot up shooter that can stretch the floor. That role is already occupied by Marc Gasol that is the teams center. Most of the experts agree that Jaren Jackson Jr.’s future is at the center position in the NBA, but he might have to play at power forward position.

This is why I consider Jaren Jackson Jr. a sleeper candidate for the NBA Rookie of the Year award this season. Memphis might make significant moves before the trade deadline and might decide to blow everything up and go with a youth movement. In that case, Jackson Jr. might easily find himself in the race for the award.

In the eyes of the NBA world, Kevin Durant is the second-best player What a difference does a year make for Michael Porter Jr. From being considered the consensus No. 1 pick in the 2018 NBA Draft to an injury concern that slid all the way to 14th pick and the Denver Nuggets. The concern regarding Michael Porter Jr. has always been his health. Porter Jr. has missed almost all of his freshman season at Missouri and is yet to play a minute for the Nuggets this off-season.

The Nuggets might opt to redshirt Michael Porter Jr. this season and let him heal up and get evaluated before putting him in action next season. Although Porter Jr. has insisted that he is healthy and wants to play, the reality is that the Nuggets will tread lightly when it comes to his health.

If he proves that he can stay healthy, Porter Jr. can be the steal of this draft. He is a mercurial talent, that has a smooth stroke and can score in a variety of ways, including penetrating, finishing at the rim or shooting from both the midrange and the perimeter. The Nuggets could really use a great wing to complement their inside combo of Jokic and Millsap and their guard combo of Murray and Harris.

This is why Porter Jr. might be the ultimate sleeper in the RoY race. If he is medically cleared to play early in the season, he will get plenty of chances to shine with the Nuggets. They constantly play with one of the highest paces on offense in the NBA and put up a lot of points. They are also unselfish and move the ball well, which should provide Porter Jr. with plenty of scoring opportunities.