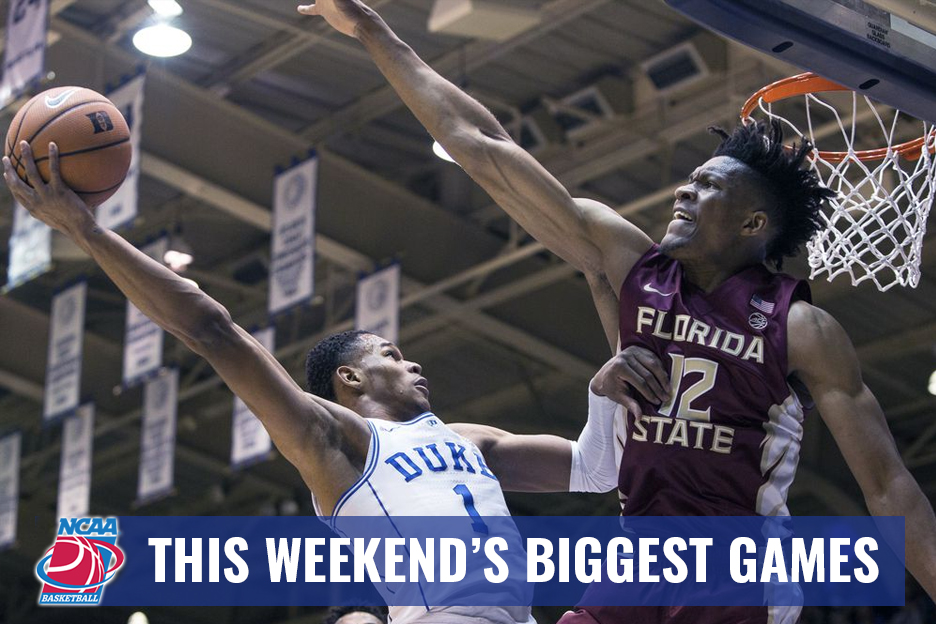 Funny story to start out this column.

ESPN was playing a commercial promoting the No. 1 Duke-No. 13 Florida State game this weekend, and the vibe for the game is made even cooler with Logic’s “The Return” playing in the background.

But then I was sitting there asking my wife, “Why is the game at 2:00 PM? You’d think they have that kind of game in the primetime slot.”

And then I thought, “That’s right. The NFL Playoffs are this weekend.”

Yeah, I don’t blame you, ESPN.

ANALYSIS: This is definitely the most high-powered matchup of the weekend between No. 1 Duke (13-1) and No. 13 Florida State (12 -2), and it’s even more of a joy with the game being in Tallahassee. Can the Seminoles give the Blue Devils their second defeat of the season in these circumstances? Let’s see what the numbers say.

In offensive production, Duke comes in with one of the best offenses in the country — they sit in the third-ranked position averaging 90.9 PPG. That’s a +11 advantage over Florida State’s 79.2 PPG, which isn’t bad. The Devils also have a +3 advantage in field goal percentage: They shoot an elite 49.8% (Just 0.2 from the 50 mark) compared to the Noles’ 46.3. In the rebounding game, it’s another one-sided edge where Duke has a +8 advantage — 44.6 RPG to FSU’s 36.7. Though not drastic, the Blue Devils also have a +4 grip on ball protection. They hold opponents to 64.1 PA, while the Seminoles sit at 68.1. Duke not only has the statistical advantage over Florida State, but do I even need to mention that they have RJ Barrett and Zion Williamson — the two best players in the country? FSU’s Terance Mann is good, but no where close to the level of Barrett and Williamson.

I think Florida State’s defense does a solid job of containing Duke’s potency, but let’s be honest here: The Blue Devils are just way too strong, and way out of FSU’s league. And the Noles lost a lot of credibility with me last weekend when they took a 65-52 loss to Virginia. Things get a bit easier for them being back home, but they still get considerably rocked by Duke.

ANALYSIS: In a battle of Top 25 teams, especially with the teams being close together in the rankings, you would assume that the matchup would be pretty balanced on paper between No. 25 TCU (12-1) and No. 23 Oklahoma (12-3). Your assumption is correct, that’s exactly what the statistics are giving us.

On the offensive side, it’s the Horned Frogs with the +6 advantage — they put up 80.5 PPG in comparison to the Sooners’ 74.3. Texas Christian also has a solid edge in shooting (+6), hitting a blazing 49.9% of their shots. OU comes in at average, sitting at 44.2. But then Oklahoma has their advantage, and it’s a significant one: A +7 edge on the glass, grabbing down a great 43.1 RPG. TCU hasn’t been the best in this category, only pulling down 36.9. That will balance out the offensive production coming from the Horned Frogs in this game, which spells even bigger problems on the road. When you look at the defensive numbers, the teams are dead-even: TCU has the narrow edge at 66.0, with Oklahoma right on their tail with 66.2. Both teams are also identical in individual starpower.

With the rebounding game being drastically in favor of the Sooners, I’m not a fan of betting on the Horned Frogs on the road — even with the more potent offense in a match of even defenses. Oklahoma’s edge on the glass counters TCU’s potency for the win in a tough fight.

ANALYSIS: Even though No. 3 Tennessee (13-1) has the statistical advantage everywhere else, the Volunteers need to be placed on upset alert on the road against the 10th best defense in the country. And Florida (8-5) has proven themselves capable of beating massive programs, they nearly took out Michigan State back on December 8 — only losing by four, 63-59.

When you compare the two on offense, it’s not even close. The Volts have a +16 advantage over the Gators, putting up 86.4 PPG over UF’s 70.8. They also have a +7 advantage in shooting hitting an elite 51.4%, while Florida only puts 44% into the net. On the rebounding end, neither team has been elite, but Tennessee has the +5 advantage grabbing down 40.6 RPG — the Gators have an average of 35.9. As I previously mentioned, Florida’s defense has been magnificent this season, ranking 10th in the nation only allowing 60.7 PPG against them. And that’s about as much as I can hype this game up, because here’s the thing: The Volunteers counter UF’s defense with a 65.0 PA average — that’s only a -4 disadvantage when you round the numbers. Also, the firepower of Florida’s scoring-leader KeVaughn Allen (10.3 PPG, 42.5 FG%) isn’t comparing to the starpower of a Grant Williams. (18.8 PPG, 57.2 FG%, 7.8 RPG, 3.9 APG)

I mentioned earlier that the Gators are capable of beating quality teams, and I used Michigan State as an example. Here’s the thing though: They killed my argument last Saturday losing to South Carolina — at home — and if you didn’t know, the Gamecocks aren’t that great sitting at 6-7 on the year. I’ll show Florida’s defense their respect, they’ll contain Williams and the Vols to keep it somewhat close, but the potency of Tennessee will just be too much for them to overcome for an upset.

ANALYSIS: In an ACC battle, this game is sure to be fun between undefeated No. 4 Virginia (13-0) and Clemson (10-4), especially with it being at Littlejohn Stadium, and more importantly, the numbers being a dead-heat. However, there is one major factor that could spoil the Tigers’ chances of giving UVA their first loss of the season: The No. 1 nationally-ranked defense of the Cavaliers.

If Virginia’s defense wasn’t so elite, I might side with Clemson in this game, but I just can’t bet against UVA who held the No. 9 ranked team in the nation (Florida State) to just 52 points last weekend. Clemson keeps it close at home (kind of), but Virginia’s lock-down technique carries them to the win.

ANALYSIS: Don’t let the small-school vibe of San Francisco (14-2) fool you, these boys can play. Back in December, they clobbered both power-five opponents California and Stanford for wins, and nearly upset a Top 25 powerhouse in Buffalo. However, No. 5 Gonzaga (14-2) is a completely different animal, but SF’s numbers say they can compete with them too.

In points-per-game, it’s not even a competition on paper. The Bulldogs have a +16 advantage in potency, and rank 2nd overall in the nation with 93.6 PPG. The Zags are just incredibly elite and hard to compete with overall, because the Dons haven’t been bad themselves as well posting a 77.8 number. Both teams shoot elite too — the Bulldogs shoot a steaming 53.2 FG%, while San Francisco hits a healthy 47.4% into the net. In the rebounding game, both teams are dead-even with SF actually having the narrow 40.4-40.2 RPG edge. And then we get to the most interesting statistic of this game: Defense. The Dons have been fantastic this year posting up the 12th best defense in the nation with a 61.2 PA mark, but the Zags haven’t been bad themselves at 69.6. The biggest question for San Francisco’s defense is if they can stop Rui Hachimura (21.4 PPG, 59.5 FG%, 6.4 RPG), Brandon Clarke (17.0 PPG, 68.9 FG%, 8.1 RPG) and Josh Perkins (10.4 PPG, 45.3 FG%, 6.9 APG)? They’ll need to, because their starpower doesn’t match up.

Do I think No. 3 Gonzaga needs to be put on serious upset alert? Absolutely. After all, you can’t discount the fact that San Francisco has one of the best defenses in the nation — and on top of that, they’re home in this game. Next question: Do I seriously think Gonzaga is going to lose? Well, that’s a different question entirely. And no, I don’t think that’ll happen. I’ll give SF their credit and give them containment over the Zags, but Gonzaga is just too much to handle for 40 minutes — remember, this is the same team that beat No. 1 Duke. Bulldogs win, but they will have to scrap it out.

ANALYSIS: Last weekend, I predicted correctly that No. 7 Kansas (12-2) would be upset by Iowa State on the road. And right off the bat, I’m telling you that’s going to happen again this weekend against Baylor (9-5) — a team who upset ISU on Tuesday. And I’m not the only one who thinks that upset will happen, so do the numbers.

Both offenses come in the 70’s, but the Jayhawks are in the top half scoring 79.3 PPG — that’s a +8 advantage over Baylor’s 71.4. Kansas also holds a +2 edge in field goal percentage, hitting 47.8% of their shots compared to the Bears’ 45.1. The Jayhawks also hold the edge on the glass, pulling down 39.8 RPG which is +2 over Baylor’s 37.8. But here’s where things get interesting when you look at the defensive side: They have a +7 advantage with 62.9 PA, which ranks as the 12th best defense in the nation. Kansas sits at 69.9 PA. The Bears are definitely going to need that elite defense against KU, because Jayhawks’ Dedric Lawson has been incredible this season averaging a double-double. He’s posting up numbers of 18.6 PPG, shooting 50.0 FG% and pulling down 11.1 RPG. Baylor doesn’t have anybody on that level on the offensive side of things.

I still see Lawson being effective in the paint, but facing off against the Bears’ defense at home is going to be a tough cookie to crumble. Enough containment is there in a full-out war, and Baylor pulls off the upset for the Jayhawks’ second straight weekend receiving the feat.

ANALYSIS: Rivalry games! Where anything can happen! You have to love this matchup even more as well with No. 8 Texas Tech (14-1) going on the road to face Texas (10-5). And here’s an even better tidbit: The numbers line up.

The Red Raiders have the +2 advantage in the points-per-game statistic, tallying 73.0 PPG in comparison to the Longhorns’ 71.7. Things bet a bit shaky for Texas in field goal percentage, but it’s not a drastic difference — Texas Tech has a +5 advantage hitting 48.1% of their shots, while Texas struggles a bit at 43.1. The teams are similar in the rebounding game, with the Longhorns having the +1 edge with 36.2 RPG — the Red Raiders sit at 35.8. When you look at the defensive numbers, you can pretty much guarantee that this is going to be a low-scoring affair. But Texas Tech is deadly: They rank 2nd in the nation averaging 53.5 PA. However, Texas hasn’t been bad themselves, they sit in the No. 29 position at 63.6 — still though, a -10 disadvantage is going to be a tough pill to swallow. And another problem for the Longhorns: They have no individual athleticism lining up with TTU’s Jarrett Culver. He posts up a stat line of 19.0 PPG, 56.4 FG% and 6.2 RPG — with Texas’ top-scorer Kerwin Roach II only shooting 41.6 FG%, yeah, good luck keeping up with that pace against Texas Tech’s defense.

With that being said, I do see the Longhorns posing a threat towards the Red Raiders at Frank Erwin Center. But here’s the thing: Like I just mentioned, Texas is challenged with keeping pace with the scoring ability of TTU’s Culver, and they have to do it against the No. 2 defense in the nation. Even at home, I just don’t see that going well the Longhorns. Texas keeps it close, but Texas Tech pulls out the rivalry win.

Best of the Rest