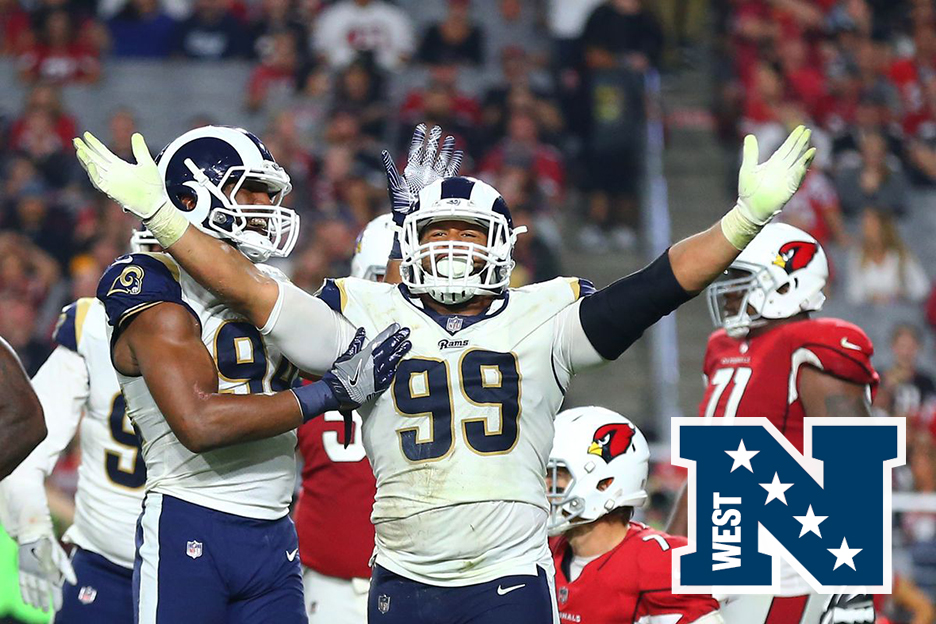 We will be keeping an eye on division futures as the season moves along, but it’s certainly never too early or too late to bet on these division races.

The NFC West has certainly changed hands over the last couple of seasons as the once-dominant Seattle Seahawks and the always-competitive Arizona Cardinals appear to be on the outside looking in already through the first two weeks of the season.

On the flip side, the steadily-improving Rams and 49ers appear to be built for now and for the future.

The Rams, with one of, if not the best young QB/RB duos in the league are looking mighty good. Jared Goff and Todd Gurley are set to terrorize the division for now and for years to come.

The 49ers, under the guidance of Kyle Shanahan and Jimmy Garoppolo, appeared to be the real deal and look every bit like playoff contenders this season. That is, until Jimmy went down with a torn ACL Sunday.

Before we get into the predictions, let’s take a look at the current odds after Week 3 for every team in the NFC West.

Clearly, there is one team heavily favored here with the rest of the clubs in chase mode. Still, we can find some opportunities to profit from this division. Therefore, we are going to make a pick and a value pick when it comes to the NFC West.

I still see value in betting the Rams to win the division here as it sure looks like they will.

After leading the NFL in rushing last season, Gurley appears poised to take aim at his second consecutive rushing title in 2018-19. He rushed for 108 yards and 5.4 yards per carry in the Rams’ Week 1 victory over the Raiders, but was limited to just 19 carries in Week 2 due to cramps, although he rushed for three touchdowns in a 34-0 blowout win over the Cardinals. There was no need to push him in this one. His 28.2% first down rate is tops among running backs with at least 30 carries this season.

Goff is off to a fine start himself as his nine yards per attempt ranks third in the NFL behind the blazing-hot starts of Tampa Bay’s Ryan Fitzpatrick and Kansas City’s Patrick Mahomes. Goff is going to find a way to get the ball into the hands of playmakers like Gurley and Brandin Cooks, the latter of whom torched the Cardinals for 159 yards in Week 2.

And then there’s the defense.
Through three weeks, the Rams rank third in the NFL in total defense (266 YPG) and fifth in rushing defense (74.5 YPG). The Rams’ defense is littered with stars, including reigning Defensive Player of the Year Aaron Donald and five-time Pro Bowler Ndamukong Suh on the D-line. In the secondary, the acquisition of veteran Aqib Talib helps a group of corners that already contained two-time Pro Bowler Marcus Peters. This defense has allowed only 13 points in two games this season (1st) and has already pitched a shutout.

When we look at the best all-round teams in the entire NFL, not just the NFC West, the Rams are certainly in that group and are a very good bet to take down their division, even at -500 odds.

Now that Jimmy Garoppolo is out for the season with a torn ACL, it really only leaves on value pick on the table. The Arizona Cardinals may win the #1 pick in next year’s draft, but they will not be winning my value pick to win the NFC West. That leaves one team, the Seattle Seahawks. It would be nothing short of a miracle if the Seahawks can win the division.

The Rams are going to be tough to knock off in the division, but the Seahawks have a small (tiny) chance. They play the Rams at home in Week 5 before traveling to Los Angeles in a Week 10, and if the Seahawks can somehow manage to take one from the Rams at home, who knows what will happen the rest of the year?