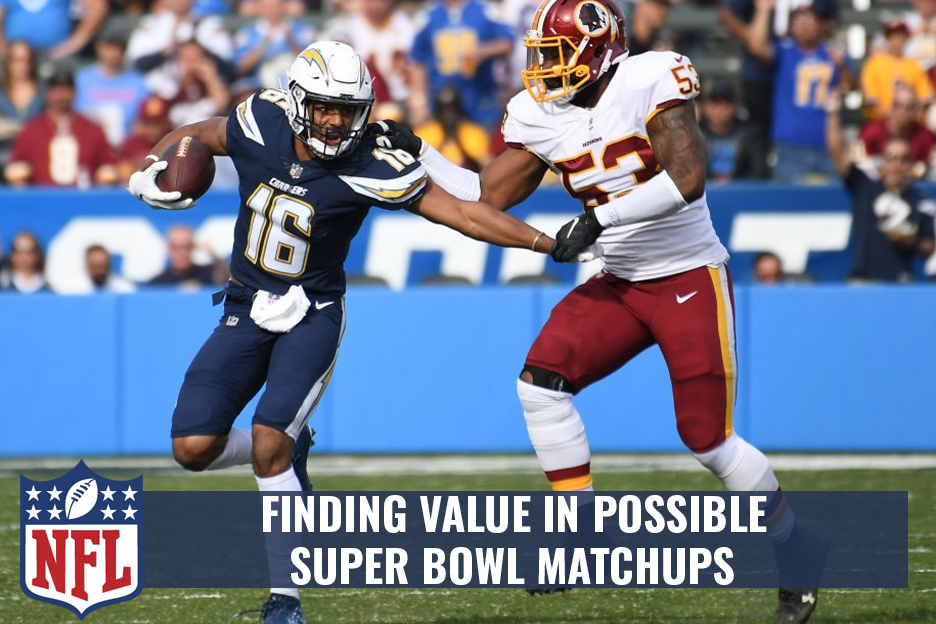 We are past the halfway mark of the NFL regular season which means our attention can now turn fully towards the postseason picture.

It’s crunch time for plenty of teams across the league, some of which will prevail their way into a postseason berth while others will crumble and miss the dance all together.

That said, when it comes to possible Super Bowl matchups, the value will lie within those very teams that are going to be on the playoff bubble moving forward.

Of course, the Saints, Rams, Chiefs and Patriots’ of the world are going to favor to get into the Super Bowl. Matching up any of these teams to play one another in Super Bowl 53 doesn’t provide a ton of value, however. For instance, the Saints vs. Chiefs, according to MyBookie, pays +500. Rams vs. Patriots provides a little more value at +1000.

While these plays do provide a hint of value given how these teams have performed so far, we want to make some real money here. Money that can’t be made in a single event in the regular season type of money.

With that, let’s go ahead and identify some possible Super Bowl 53 matchups that provide some big-time value while being at least somewhat realistic all at the same time, with odds courtesy of MyBookie.

Both the Steelers and the Bears weren’t exactly supposed to be in spots to reach the Super Bowl this year, but at this point in time, it appears they each have a legitimate shot.

Chicago’s chances got boosted early in September when they acquired All-Pro pass rusher Khalil Mack from the Raiders. That said, while we knew the defense would improve with the addition of a star of Mack’s caliber, we still didn’t know how the offense would fare under second-year pro Mitchell Trubisky after a disappointing rookie season under center in 2017.

The Steelers were still viewed as postseason contenders out of an AFC North Division that didn’t present too many improved clubs aside from the Browns, however, the very absence of Le’Veon Bell put this team’s chances at success in doubt. This became even more apparent when the Steelers got off to a 1-2-1 start which included a tie and a loss within the division.

Several weeks later, the Bears are 6-3 and the Steelers are 6-2-1 and have rattled off five straight wins including three over divisional opponents. 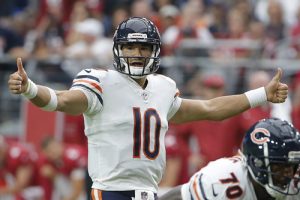 Trubisky has held his own this season with 19 touchdown passes and a passer rating of 101.6, but the Bears fourth-ranked defense has been the key to their success. Chicago has won three straight games to get into first place in the NFC North, however, some very important games lay ahead. They lost to the division rival Packers in Week 1 and have yet to play the Vikings. That makes their three combined games left against these two divisional foes of utter importance when it comes to their chances at an NFC North crown.

The Steelers are in good shape within their division and a first-round bye is a distinct possibility. The Browns and Ravens would need a miracle to catch Pittsburgh with sub-.500 records while the 5-4 Bengals have already lost to Pittsburgh with the two teams meeting again in the Week 17 regular season finale. Pittsburgh’s final three games come against the Patriots, Saints, and Bengals, but their next four are against the Jaguars, Broncos, Chargers, and Raiders, with three a minimum of three wins very possible. They are going to be a playoff team.

With both teams rolling towards postseason berths, this could happen. Chicago’s defense could surprise their way to the Super Bowl while the Pittsburgh offense has looked mostly unstoppable for the vast majority of the season.

At these odds, I see plenty of value in this play.

I’m not sure there has been a quieter playoff contender than the Panthers in that NFC South this season.

With all the focus on the Saints within that division, the Panthers sit at 6-3 through Week 10 despite being blown out by the Steelers in Pittsburgh on Thursday Night Football in Week 10.

Obviously, the Chiefs are in excellent shape to not only make the postseason with that 9-1 record, but are looking destined for that first round bye despite the San Diego Chargers sitting at 7-2 in a very quiet manner themselves.

The Panthers also have a nice little break in their schedule coming up before two critical games against the division-leading Saints over the final three weeks of the season. Their next four games come at Detroit, versus Seattle, at Tampa Bay and at Cleveland. Road games aren’t easy to win in the NFL, but those are three relatively favorable teams to face away from home at a critical point in the season.

The Chiefs’ remaining schedule is favorable as well after their huge Monday Night Football game in Los Angeles against the Rams in Week 11. They have their bye after that game, and face the Raiders twice, the Ravens, Chargers, and Seahawks for the remainder of their schedule.

If even the Chargers pull off the unthinkable and surpass KC for the division title, the Chiefs are going to be in the playoffs and extremely dangerous once there.

The Panthers are getting the job done on the ground as the league’s third-ranked rushing team while their offense is actually right up there with 26.8 points per game, good for ninth. Their defense took a hit on Thursday against Pittsburgh, but they have otherwise allowed 22.5 points per game in their other eight games which would sandwich them in at 11th in the NFL.

The Chiefs own the league’s best offense and the heavy favorite to win the MVP award as Patrick Mahomes is listed at -150 to take home the league’s biggest individual regular season prize. Their defense could be their downfall as they rank 29th in total defense, which usually is not even close to good enough to win, little own go 9-1 after 10 weeks.

At the end of the day, I see two playoff teams here and one big Super Bowl contender in Kansas City, so if the Panthers can continue to surprise and reach Super Bowl 53 I love the chances and the value with this play.

If you want to make some serious money, I indeed see a realistic, chance at these two clubs getting into Super Bowl 53 together.

As it stands today, the Redskins are 6-3 and -140 favorites to come out on top and win the NFC East division with both the Cowboys and Eagles sitting with 4-5 records.

The Chargers, at 7-2, are still +400 underdogs to catch the Chiefs to win the AFC West, but there are a couple things they can do to increase their shot at winning this division and possibly obtaining a first-round bye as one of the top two seeds in the AFC. The first avenue would be to beat Kansas City in their Week 15 matchup and even up the divisional first tiebreaker at 1-1 in head-to-head play.

The second would be for the Chiefs to lose to the Rams in Week 11, and the Chargers could win two very winnable games at home against the Broncos and Cardinals. If this scenario played out, the two teams would own identical 9-2 records heading into Week 13, given Kansas City’s Week 12 bye.

Washington has their fate in their own hands with a two-game lead in the NFC East. They are 1-0 against the Cowboys, although they still have two remaining games against the Eagles. They could bury the Cowboys on Thanksgiving in Dallas before facing the Eagles twice over the final five weeks of the regular season.

Look, any playoff team has a realistic shot at making the Super Bowl. A first-round bye would clearly help either club, although the Redskins would be hard-pressed to do so. The Chargers, however, have a legitimate chance if they continue to play good football.

I do, however, fully expect both teams to be in the playoffs after Week 17. At that point, anything can happen. We’ve seen Wild Card teams win the Super Bowl before and we’ve seen teams get a bye and lose.

The sheer unpredictability of professional sports is what makes bets like this so interesting, and considering a $100 bet could net you $23,000, I think it could be worth a shot.