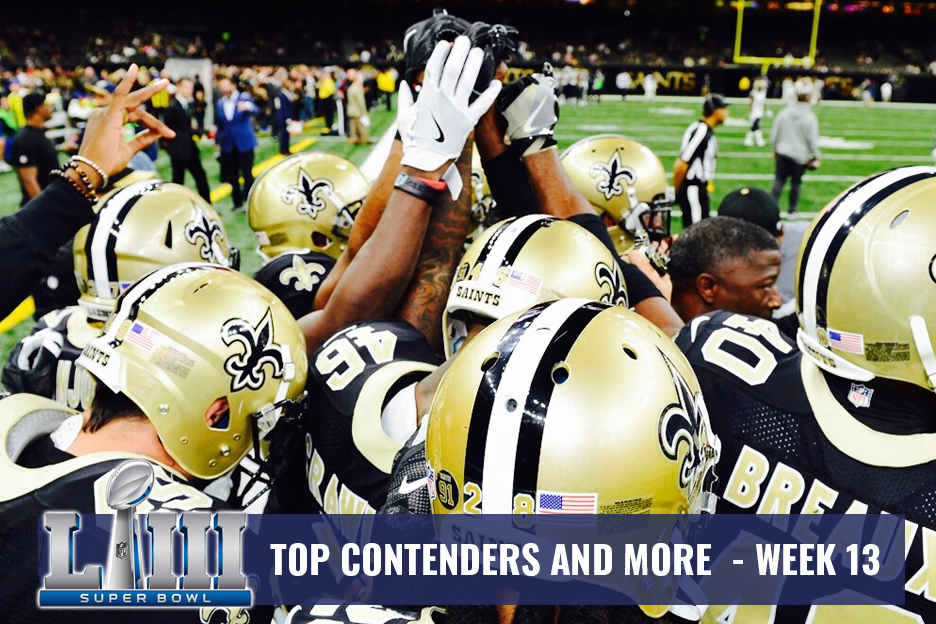 As we head into Week 14, the playoff bubble is getting awfully crowded. A number of teams are jockeying for just a few spots, and that sets up what should be a fascinating final month of the 2018 regular season.

The teams that look to be locked in have plenty of work to do as well, as current seedings can easily change on a week-to-week basis. As for who will be hoisting the Lombardi Trophy at the conclusion of Super Bowl LIII, there remains plenty of debate on who is for real and who is not.

The oddsmakers have a pretty good handle on the cream of the crop. Let’s take a look at the current odds for all 32 squads, starting with the favorites to win the whole shebang.

Record: 10-2
Standing: 1st – NFC South
Current odds: +350
The Saints had a setback last Thursday night versus the Cowboys, but there’s no need for alarm bells to go off. This is one of the top teams in the league, and a Super Bowl favorite as a result.

Record: 11-1
Standing: 1st – NFC West
Current odds: +350
The setback for the Saints gives the Rams a clear path to the top seed in the NFC. Winning out won’t be easy, but this talented club has the firepower on both sides of the ball to get it done.

Record: 10-2
Standing: 1st – AFC West
Current odds: +600
The Chiefs were huge favorites heading into Sunday’s game with Oakland Raiders, but the AFC leaders had quite the scare put into them by one of the worst teams in the league. Is that a sign of chinks in the armor or a mere shot in the arm? Time will tell.

Record: 9-3
Standing: 1st – AFC East
Current odds: +500
Once again, the Patriots are in the upper echelon of AFC squads. While some may be getting tired of the Patriots in the postseason, there will come a time when we look back on this run as one of the most impressive in league history.

Record: 9-3
Standing: 2nd – AFC West
Current odds: +1200
Since a surprising loss to the Denver Broncos, the Chargers have righted the ship with two straight wins. The five seed appears to be theirs, and the team is poised to pounce if the Chiefs stumble.

Record: 7-4-1
Standing: 1st – AFC North
Current odds: +1400
The Steelers lost a close one to the Chargers on Sunday night. While the club looked like serious contenders a few weeks back, two straight losses is leading to some furrowed brows.

Record: 9-3
Standing: 1st – AFC South
Current odds: +1600
The Texans have ripped off nine straight victories. The hottest team in the league is in control of the AFC South, and a first-round bye isn’t out of the question.

Record: 8-4
Standing: 1st – NFC North
Current odds: +2000
The impressive 2018 season of the Bears hit a speed bump on Sunday in the form of the New York Giants. While we’ll have to wait and see how the team responds to adversity, they remain the favorites for the NFC North.

Record: 7-5
Standing: 1st – NFC East
Current odds: +2500
Smash mouth football can still win in the NFL. The Cowboys drove that point home versus the Saints last Thursday, and they could be a very dangerous team in the postseason if they make it that far.

Record: 6-5-1
Standing: 2nd – NFC North
Current odds: +3300
If you have been waiting for the 2018 Vikings to kick things up a notch, you are not alone. The clock is ticking for the club to make some kind of run, but it looks like it’ll be a disappointing year when all is said and done.

Record: 7-5
Standing: 2nd – AFC North
Current odds: +3300
Three straight wins later, and the Ravens are right back in the middle of the AFC playoff race. The team’s tough defense will make them a team that no one wants to face off with in the postseason.

Record: 6-6
Standing: 2nd – NFC East
Current odds: +3300
The Eagles have now won two in a row, but it remains unclear if the team is awake enough to make a postseason run. The talent is certainly there, but inconsistent results points to this being one of the open-ended questions of the final month.

Record: 7-5
Standing: 2nd – NFC West
Current odds: +3300
After three consecutive wins, the Seahawks are one of the favorites for an NFC wild-card spot. For a team that was supposed to be re-tooling in 2018, that’s an impressive accomplishment.

Record: 6-6
Standing: 2nd – AFC South
Current odds: +5000
Despite Sunday’s shutout loss to the Jacksonville Jaguars, the Colts remain squarely in the playoff race. However, the team’s response to last week’s debacle will be awfully telling on how the rest of the year will play out.

Record: 6-6
Standing: 3rd – AFC West
Current odds: +6600
The Broncos appeared to be all but dead and buried a few weeks back. Three consecutive wins have changed perceptions of this squad, and they have a legitimate shot at the AFC’s final wild card spot.

Record: 6-6
Standing: 3rd – AFC South
Current odds: +6600
While the Titans are also in the mix for that coveted spot, the team’s inconsistency doesn’t exactly inspire optimism that they’ll get the job done. A .500 record seems likely when all is said and done.

Record: 6-6
Standing: 2nd – NFC South
Current odds: +10000
After starting off the year 6-2, the Panthers have dropped four in a row. Time is running out for the ship to be righted and for the squad to rejoin the playoff hunt.

Record: 6-6
Standing: 2nd – AFC East
Current odds: +15000
The Dolphins are in the mix, but they are another inconsistent team which has its work cut out to reach the dance. This has all the makings of a team that finishes the year in the neighborhood of .500.

Will Most Likely Miss Playoffs

Record: 4-7-1
Standing: 3rd – NFC North
Current odds: +25000
Sunday’s home loss to the lowly Arizona Cardinals was an outright debacle, and it cost head coach Mike McCarthy his job. Joe Philbin is steering the ship on an interim basis, but this will be a coveted gig in the offseason.

Record: 6-6
Standing: 3rd – NFC East
Current odds: +25000
Another QB has gone down for the Redskins, as Colt McCoy has suffered a broken leg. The keys have been handed to recently-signed Mark Sanchez, and that doesn’t inspire confidence for the month of December.

Record: 4-8
Standing: 4th – AFC South
Current odds: +25000
The defense we have all been expecting to see from the 2018 Jaguars emerged for Sunday’s shutout victory over the Colts. If they can bring that effort to the table the rest of the way, opponents are going to be miserable.

Record: 4-8
Standing: 3rd – NFC South
Current odds: +25000
Two straight wins doesn’t wipe away the bad taste of a poor season, but the Buccaneers still deserve some credit. If they can keep it going over the final month, there may be something to look forward to next year.

Record: 4-8
Standing: 4th – NFC East
Current odds: +25000
The Giants are another squad which is bringing it in spite of being in the midst of a lost season. Sunday’s win over the Bears was a definite 2018 highlight, and the team’s remaining opponents can consider themselves put on notice.

Record: 4-7-1
Standing: 4th – AFC North
Current odds: +50000
Two straight wins made the Browns look like a team on the ascent, but the Texans took the air out of the balloon on Sunday. There’s a ton to build on here, and the Browns permanent head-coaching gig will be highly sought after as a result.

Record: 4-8
Standing: 4th – NFC South
Current odds: +50000
It has been a disappointing season for the Falcons, to say the least. Injuries wiped away playoff hopes in a hurry, but the team’s lack of consistency hasn’t helped the situation whatsoever.

Record: 5-7
Standing: 3rd – AFC North
Current odds: +50000
The Bengals are another injury-riddled squad, but its shortcomings on defense likely would’ve derailed the squad regardless. The seat of head coach Marvin Lewis is getting pretty toasty.

Record: 4-8
Standing: 4th – NFC North
Current odds: +50000
Head coach Matt Patricia’s first year at the helm has not gone well. The team needs a retool n the offseason, so 2019 may serve as a better indicator of his suitability for the job.

Record: 4-8
Standing: 3rd – AFC East
Current odds: +50000
The Bills are another squad that has a lengthy offseason shopping list. Thankfully, they can cross QB off of it, as rookie Josh Allen seems to be coming along nicely.

Preparing for the 2019 NFL Draft

Record: 3-9
Standing: 4th – AFC East
Current odds: NA
The Jets came out like gangbusters on Sunday versus the Titans and sprinted to a 16-0 lead. Unfortunately, the team would flail wildly down the final stretch before going down to defeat.

Record: 3-9
Standing: 3rd – NFC West
Current odds: NA
The Cardinals deserve a sincere tip of the cap for getting the job done against the Packers. It was an impressive effort in what remains an imposing environment, not to mention a bright spot in a season which has been devoid of them.

The 49ers have been ravaged by injury, and the team is in the midst of a disaster of a season as a result. It’s hard to remember that this team had visions of the postseason at the start of the year.

Record: 2-10
Standing: 4th – AFC West
Current odds: NA
The Raiders came to play this week, but that doesn’t change the fact that the poorly constructed squad is a mess. Will they be bringing the same effort to the table over the final month?