NFL: Why Will the Saints Reach the Super Bowl LIII 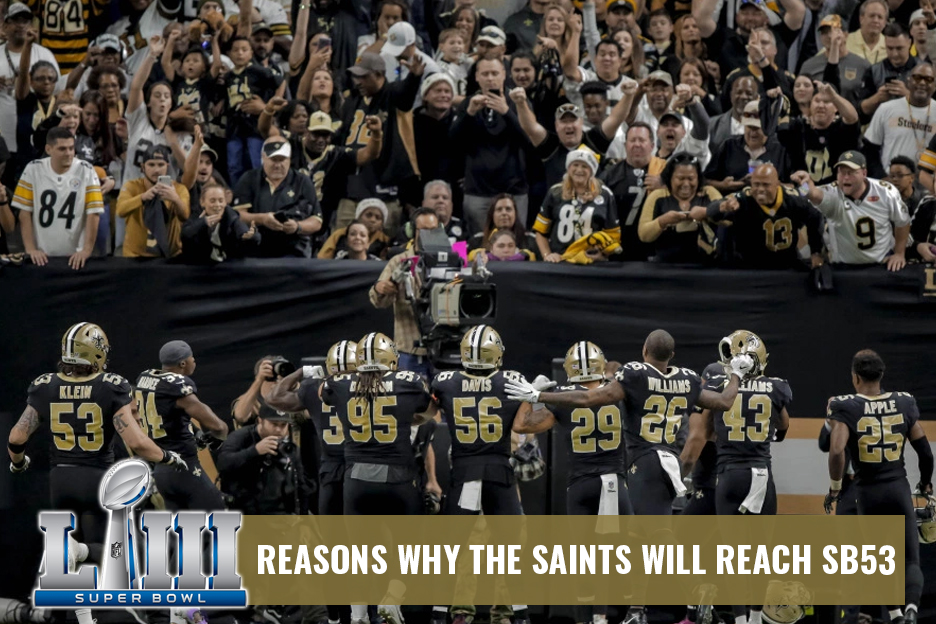 After losing their opening game in surprising fashion this season, the New Orleans Saints have taken over the NFC.

Their 20-14 come-from-behind win over the Eagles in the Divisional Playoffs shouldn’t be overlooked.

The Eagles were on an absolute roll and looking like the team of destiny once again. And the Saints—and Alshon Jeffery—stopped that right in its tracks, persevering and digging themselves out of a significant hole.

They certainly had the pieces to do it. Drew Brees had the best passer rating in the entire league in 2018. Michael Thomas led the league in receptions. Alvin Kamara was 6th in all-purpose yards. And though it may hide behind offensive accomplishments, they have the 3rd-best run defense in the NFL.

These are just some of the reasons why the New Orleans Saints will advance to Super Bowl LIII.

Their opponent, the Los Angeles Rams, disposed of Dallas without too much of a fight. And though they’re field goal underdogs to New Orleans, it’s mostly because they’re on the road.

Despite losing to the Saints 45-35 in the Super Dome earlier this season, it doesn’t mean much. Just look at the Eagles. They lost 48-7 at New Orleans but almost beat them the second time around. That’s why the Saints going to the Super Bowl can’t be a simple prediction.

With that said, here are five concrete reasons why they will advance, starting with probably the least obvious one.

1. Making Jared Goff Do All the Work

Compared to three or four months ago, the Saints secondary is vastly improved.

People were starting to get worried again after the Panthers marched on them in the season finale. But they buckled down against one of the hotter QBs in the league, Nick Foles.

And while Jared Goff is certainly capable of winning some games by himself, the balance of the Rams offense is so vital to them. Even some solid run D’s can key on the ground game and not stop it. Just look at what happened to Dallas.

But the Saints can make the most of this situation. They’re an even better unit against the run and can better afford to bring an extra guy in the box. Corner Marshon Lattimore will be left on plenty of one-on-ones, something Dallas couldn’t really do with either of their CBs.

This will allow New Orleans to better handle the two-headed monster that’s developed in the Rams backfield. Everyone knew Todd Gurley was great. But now C.J. Andersen is once again on top of his game and has three straight 100-yard-plus performances.

PLEASE NOTE
By filling an extra lane or having another body to cover the edges against the run, the Saints can at least diminish this run game. They did so the last time these two met. Instead, they let Goff have his yards and waited for the few mistakes he sprinkled in, including an interception on his side of the field.

Going into this game, the Saints will have given up a total of only 553 rush yards over the past two months. That’s seven games, 79 yards-per-game.

They’re also just giving up 3.7 yards per attempt, so it’s not like opponents are only preferring the air attack. That stretch of games included playing Christian McCaffrey twice and Ezekiel Elliott. Between Elliott and Gurley, they didn’t break four yards a carry versus New Orleans.

This unit knows what it’s doing. Goff might get his yards but breaking the balance of that offense is key. And being 4th in the league in pass-rush helps to disrupt quite a few pocket passers too.

The Rams defense gave up 33 points a game in the regular season. In the six times they played top-10 offenses, they gave up 35 per-contest. That includes the 45 they surrendered to New Orleans.

They keep themselves afloat on defense with Aaron Donald’s sacks, top-five rankings in INTs and fumble recoveries, and the ability to get off the field on third down. But the Saints are the last team to let a defense bail itself out.

Look at Brees and the Saints the last game they played versus the Rams. No interceptions, no sacks, 58% on third downs. I thought Donald didn’t even play that game, but it turns out he just had no impact in it. It’s safe to say coach Sean Payton knows what he’s doing.

The only thing that could kill the precision of this offense now is the pressure. Brees does not have good numbers when being suffocated in the pocket, even though he steps into it better than most. He’s improved this season, but he also hasn’t been tested much.

But I don’t see the pressure coming from anywhere but Donald. Against the top four offensive lines they’ve played this year, the Rams have three non-Donald sacks. It’s not impossible for them to apply pressure. It’s just unlikely.

I know Brees and Thomas are the dynamic duos that pulled New Orleans through against Philadelphia. They’re what powers this offense, along with the offensive line.

But Alvin Kamara might not only be the X-factor on this unit. He’s also the most important player in this game.

Last time out against the Rams, he had 116 all-purpose yards and three TDs. Not bad, but he can be utilized more. And I don’t think the Rams can take the combo of him and Ingram over a whole game.

It was much better in the first meeting to just let Hall-of-Fame quarterback Brees do his thing. He had 346 yards, 9.6 an attempt, and four touchdown passes. Fair enough. But the Rams will make adjustments in their secondary to minimize his connections to Thomas downfield. 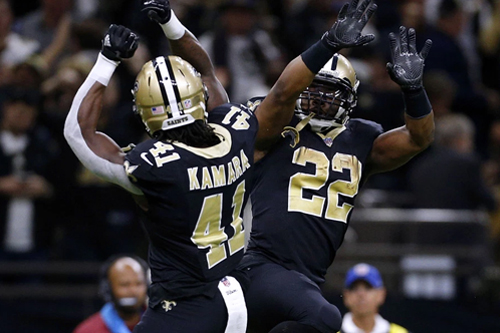 That’s where Kamara and Ingram come in. The latter often gets forgotten because he only has 138 carries this season after missing the first four games. But he still has 4.7 yards a carry, an average even better than his fellow back.

Kamara can be worked more on the ground in this game, on top of using his pass-catching skills. He and Ingram have an offensive line that’s No. 1 in “stuff rate”, meaning they have the least amount of runs getting stopped at or behind the line of scrimmage.

They’re also above-average at getting the backs beyond the second level and are top-10 in short yardage situations. You pin them up against a D-line that’s 22nd, 25th, and 21st in those categories, and the Saints have a clear advantage in the run game.

It’s something that can unleash Kamara and Ingram, whether as a change of pace or to wear the game down when Brees has already done his damage. Either way, don’t underestimate this run game.

Drew Brees is 6-0 in home playoff games since joining the Saints. That’s beside the fact their last four playoff teams have a combined regular and postseason record of 32-3 at home.

Sure, they changed stadiums, but New Orleans sure hasn’t changed. It has one of the hardest group of fans for opponents to play in front of. I consider it impressive that the Rams and Sean McVay, despite all their talent and knowledge, were able to put 35 points up in that building.

Not counting the final home game, a loss in which Brees, Kamara, and other starters rested, New Orleans averaged 38 points per game at home.

The Rams have only played three playoff-bound teams on the road this year. They lost to the Saints by 10, scored all of six points against the Bears, and eeked out a two-point win over Seattle before the Seahawks got hot.

It doesn’t mean the Rams can’t win on the road. But the last five home teams in the NFC Championship have won the game. The last three (Carolina, Atlanta, and Philadelphia) have done so by a combined score of 131-43.

I don’t take much stock in west coast teams flying over to the east and all of that. Those stats have been debunked this season.

But when it comes to this game, this crowd, and this Saints team’s performance at home in big games, it’s hard to ignore.

5. Just How Good Brees Will Be

Sure, Drew Brees nearly dropped 350 passing yards and had those four touchdowns against the Rams last time around.

But the possibility of him playing really well goes way beyond just that game.

The Rams are the 19th-best defense in the league in terms of efficiency. Against teams ranked in the bottom half of the league, Brees had a 75.3 completion percentage, 2,601 yards, and 21 touchdown passes to just three INTs.

His yards per game, yards per attempt, and touchdown passes per game all get bumps up from his total numbers in 2018. And those totals were near-MVP caliber already.

It also helps that Brees has been an absolute menace to teams at home this year, similar to most seasons. His precision has been unmatched, with 23 TDs to only two picks. That’s in eight games so far. He’s also carved these defenses for 319 yards a game to the tune of 76% passing.

The legendary quarterback also has quite a bit of favorable history in the playoffs. Beyond being 8-5 in the postseason as the Saints QB, he also has 4,191 passing yards in those 13 playoff games. His 65.8%, 100-plus passer rating, and nearly 30 touchdowns are more than enough to place him among the greats.

He has yet to have a truly bad playoff game and it won’t come Sunday. With 14 touchdowns and only two INTs at home in the most important games of his life, it’s no wonder he’s headed to the Hall.