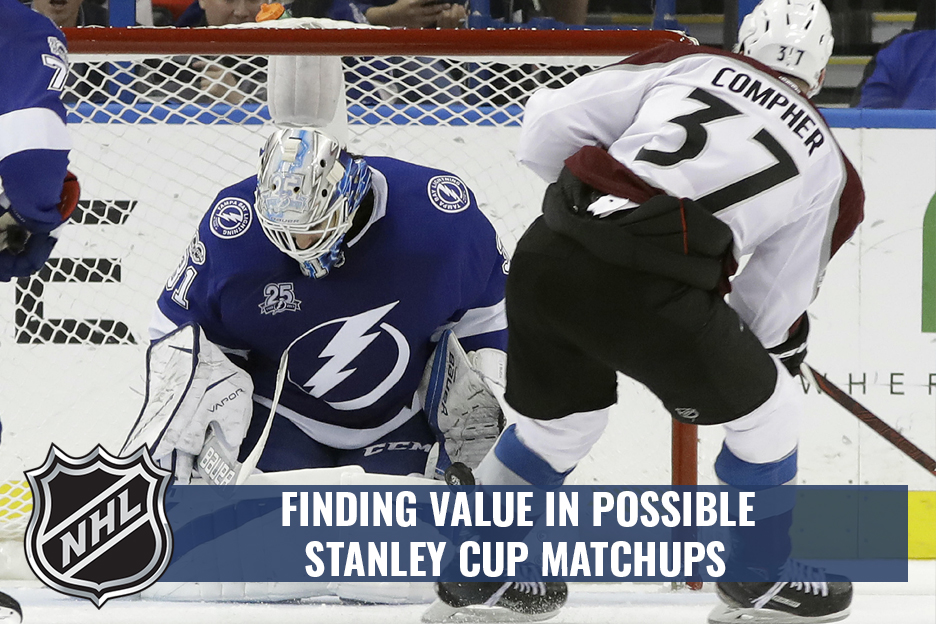 It’s hard to believe that we are just about at the quarter-mark of the NHL regular season.

It seems like it’s been an eventful first month and change of the season, but there is still plenty of hockey to play.

It also provides us with some betting opportunities.

At MyBookie, you can place bets on possible Stanley Cup matchups. Of course, there is a multitude of combination options here, but the goal is to find some value. Perhaps that means picking a team that is struggling at the moment, but one that should make the playoffs. It could also mean avoiding the recency bias and skip a team that we feel may not be there when the dust settles on the regular season.

At the end of the day, all we want is value. Betting on the favorites is cool and all, but let’s try and make some real money, while being realistic at the same time.

Let’s go ahead and identify some realistic Stanley Cup matchups that hold plenty of value, with the odds courtesy of MyBookie.

The Lightning has come out of the gates hard once again this season to re-establish themselves as contenders once again. The Avalanche, on the other hand, also came out red-hot, however, they have cooled off which has surely given this play more value.

Colorado went from +4000 odds to win the Stanley Cup to +2000 in a matter of a couple weeks after their hot start, but now they have settled back somewhere close to the middle of those two numbers at +3300, odds that have plenty of value to me if you want to throw some coin on them to win it all.

The Lightning is one of the favorites to win the Stanley Cup at +550 at MyBookie, the second favorite behind the Toronto Maple Leafs.

We know Tampa Bay is going to be in the playoffs and their star-studded roster is more than capable of making a run that, hopefully for this bet, goes one round behind last year’s appearance in the Eastern Conference final.

With these two teams, there is plenty of offense, we know that much. Tampa Bay thrives on some superstar talent, however, they are built four lines deep and can hurt you with any of these lines. Contrarily, the Avalanche is a little bit of a one-line team, although that line featuring Nathan MacKinnon, Mikko Rantanen, and Gabriel Landeskog has proven to be one of, if not the best line in the NHL.

Colorado’s path to the postseason isn’t as clear-cut as Tampa Bay’s. They aren’t yet in the “powerhouse” category and they play in a very competitive division that also features the Predators, Jets, Wild and Stars, all four of which appear ready to contend for a postseason spot.

Still, if both of these clubs get into the dance, it’s certainly possible both could make a run and give us plenty of value in the process.

If this sounds familiar, it’s because this was the Stanley Cup matchup in 2016 when the Penguins beat the Sharks for the first of back-to-back championships, beating the Predators to win the 2017 Cup.

This one has plenty of value in my mind because these odds would not nearly be as attractive if both teams were playing up to their potential.

The Penguins currently sit 11th in the Eastern Conference, albeit with games in hand on just about every team. Still, they have just a 3-4-1 record on home ice and a goal differential of just +4 despite owning some of the best offensive weapons in the game.

For their part, San Jose became immediate Pacific Division favorites after acquiring Erik Karlsson, but their ride hasn’t been all that smooth to this point. They’ve struggled to win on the road with a 4-4-2 record away from the Shark Tank and Martin Jones owns just a .900 Sv% on the season. They are currently behind both the Canucks and Flames in what has been a surprisingly soft Pacific Division in the early going.

PLEASE NOTE:
Right now, the Penguins are reasonably listed at +1800 to win the Stanley Cup with the Sharks sitting with +1500 odds at MyBookie. These odds suggest it would be too long of a shot for either club to win the Cup.

You just have to like the chances of both clubs making the playoffs, it’s simply way too hard to imagine the star power on both of these teams not coming through when it’s all said and done.

After that, you also have to like the playoff experience on both clubs. After winning two Stanley Cups over the last three years, the Pens’ roster is riddled with playoff experience. San Jose has missed the playoffs just once since the 2003-04 season, so clearly they’re stacked with postseason experience as well.

With both teams overwhelmingly likely to make the playoffs, we could let the talent and experience take over en route to a Stanley Cup final matchup.

How about an all-Canadian matchup?

No, this one clearly isn’t as likely given it would take a minor miracle for Montreal to reach the Stanley Cup final, but they have more than surpassed expectations to this point in the season.

They began the year at +3400 to even win the Atlantic Division, odds that have moved to +1800 at MyBookie. What’s more is that Montreal has done all of this with a .892 Sv% from Carey Price to this point in the season while they have scored 3.29 goals per game to slide into a top ten offense.

Now, making the playoffs is going to be no easy task for Montreal. The Atlantic Division is a tough one with the Lightning, Bruins and the Maple Leafs all heavily projected to make the playoffs. That would technically leave the Habs to fight for a Wild Card spot with what is currently a boatload of clubs. 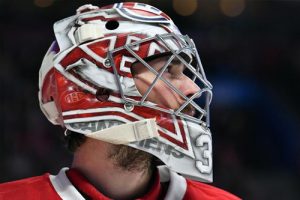 Where I like their chances is if they get in. Carey Price might not be enjoying a good regular season to this point, and he was bad last year. That said, he owns a career 2.53 GAA and .914 Sv% in the postseason and produced a 1.86 GAA and a .933 Sv% in his most recent trip to the dance in the 2016-17 season. If he got hot, the Canadiens would be tough to beat.

With this play, it all rides on Montreal. It won’t be easy for the Jets to get into the final, either, but we do know that they will be a playoff team and a dangerous one at that. It’s a longshot, but it provides a ton of value at the same time.

I like the value of this one especially when we compare it to the other Bruins possible matchups at MyBookie. For instance, Bruins vs. Golden Knights, who are sitting 29th in league standings and tied for the most games played, is at +8500. Relative to a play like that, this play screams value.

Once again we have one team we would surely expect to see in the playoffs in Boston while the Stars are going to be competitive in fighting for a playoff spot in the Central Division. The good news in their case is that it’s shaping up for both Wild Card spots in the Western Conference to come from the Central given how bad the Pacific has been so far.

It would be really interesting to see these clubs go head-to-head as they both have elite top lines that rank among the very best in the NHL. The trio of Brad Marchand, Patrice Bergeron, and David Pastrnak is doing a ton of damage early on while Jamie Benn, Tyler Seguin, and Alexander Radulov are just about as dangerous as it gets in the west.

PLEASE NOTE:
We also have two of the better defensive clubs in the league. Boston ranks second in league defense behind only Nashville while the Stars check in at ninth. This should help Dallas’ cause in getting into the postseason.

I believe the Stars are a team with the best yet to come. They struggle to get secondary scoring often, however that is something I believe GM Jim Nill will address later in the season if he believes his club is a playoff contender.

The Bruins’ window to win another Cup is slowly closing. Zdeno Chara is 41 and a free agent after the season. Tuukka Rask hasn’t been good this season and Bergeron’s concussion and injury history make him older than his age of 33 would show. It’s not closing imminently, but they will likely give it their all to get another championship under their belt sooner than later.

The value here is off the charts and it’s a realistic matchup to boot.

I’m going to use the term “realistic” a little more loosely with this one, but at least one end of the spectrum has a solid chance at making the finals as we’ve already covered the Sharks above.

That said, let’s take a close look at the Panthers.

Florida lost Roberto Luongo in the first game of the season this year, and they would go 2-5-3 without him. Luongo came back to start the second game of back-to-back games in Finland to kick off November, and the Panthers have gone 4-0-0 since and have outscored their opponents 17-6 in that span.

Going back to last year, Luongo went down with an injury on December 4th and would not start again until February 17th. In those 28 games, the Panthers went 15-10-3. From February 17th through to the end of the year, the Panthers’ 36 points ranked second in the league behind only Nashville.

The trend here is that this team is very, very good when their number one goaltender is healthy. He put together a 2.47 GAA and a .929 Sv% last season and owns a 1.42 GAA and a .952 Sv% this season. At the age of 39, staying healthy for the remainder of the season and throughout three pre-final rounds of the playoffs could be a lot to ask. He hasn’t started more than 39 games since the 2015-16 season.

Still, Florida has one of the best top-six forward groups in hockey with Aleksander Barkov, Mike Hoffman, Evgenii Dadonov, Vincent Trocheck, Jonathan Huberdeau and Nick Bjugstad. They have one of the most underrated defensemen in Keith Yandle while Aaron Ekblad is a young stud. 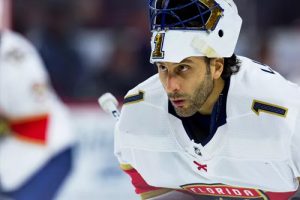 I could certainly see Florida climbing their way into Wild Card contention with Luongo back healthy. They will need more consistent goaltending without him in the net to keep him fresh, but this team will score enough to win.

There aren’t too many bigger miracles in hockey history than the Golden Knights going to the final last year, so in the “anything can happen” spirit, I will suggest sprinkling on this possible Stanley Cup matchup at massive value.