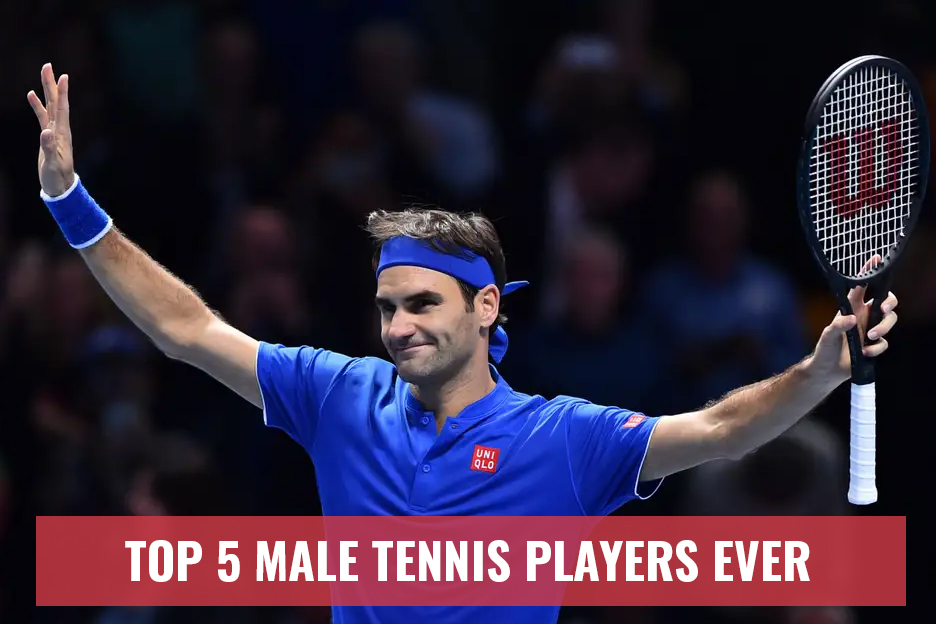 Is greatness subjective or objective? We know greatness must have an objective component. Michael Jordan went 6/6 in the NBA Finals winning the Finals MVP each time. But is it solely because of his accomplishments that he is considered the greatest?

What about intangibles that are immeasurable by any statistic? Most players, coaches, and members of the media regarded Jordan as the most competitive athlete the world has ever seen. I’m guessing these people aren’t huge tennis fans. If they were, Jordan may not be a consensus #1.

Tennis pros have to maintain a laser-like focus and competitive edge for nearly every split-second of the match. Tennis is a sport that filters out those with no heart many times quicker than fighting. If an MMA contest isn’t going your way, you can clinch to slow the action. You could possibly take the fight to the ground where attributes like timing, rhythm, and speed are almost completely nullified.

Tennis players take breaks between games and sets, but never in the middle of the action. There is no time limit on points or sets either. In the mental sense, I have always likened a tennis match to a good fight. I know from personal experience fighting in the ring or cage that once a combatant lets even the tiniest negative thought creep into their mind, they are a step behind.

Once a tennis athlete is a step behind, they are more likely to quit. No, I don’t mean just throw their hands up and walk off the court. That is what comes to mind when many people think of quitting.

Quitting can simply mean an athlete has stopped trying to win. They negate taking the chances they should in hopes of regaining their footing in the match, only to play it safe and not lose terribly on the scorecards.

In the mind of a fierce competitor, being a step behind is unacceptable. If they allow themselves to operate on that frequency, they are no longer competing at a high level. The reaction times and athletic quickness needed to truly be great at tennis are unparalleled in any other sport.

Today I’m going to attempt to measure the greatness, subjective and objective, of the top 5 tennis players of all time. Each of these players has the heart of a lion. If any of these guys didn’t, they wouldn’t even be mentioned in the top 100. 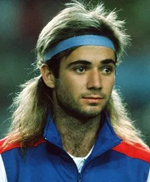 The native son of Las Vegas may not be a consensus top 5 pick if you ask experts and members of the media. On paper, he simply doesn’t have the resume of some of the other greats.

Andre makes up for this with his personal transparency, and love for the game. A couple tennis legends you won’t see on this list are Jimmy Connors and John McEnroe. They had personal transparency for sure, and they undoubtedly loved the game or they wouldn’t have spent half their lives playing it.

It’s how this “love” of the game was expressed that didn’t sit well with me. Both Jimmy and John played as hard as the next guy on any given night. It was when things didn’t go their way that they were unfortunately transparent.

Connors and McEnroe were infamous for their whining and complaining. Tennis already carried a bad rap in the sports world as many believed some of their best athletes to be spoiled brats.

Andre Agassi made tennis cool. From the bright colors on his clothes to his gorgeous flowing locks, Andre was the man! He even had Hollywood superstar Brooke Shields as his wife.

His return game was maybe the strongest of any player ever. This, of course, made for some epic battles with his 90’s nemesis Pete Sampras.

Another reason I have Andre on this list is his continued dedication to the youth of tennis and the future of the sport. The Andre Agassi College Preparatory Academy in Las Vegas, NV is just one of several ways Andre continues to positively influence the lives of our country’s youth on and off the tennis court.

Later in his career, Andre went with the bald look succeeded. Taking from my personal experience just one more time, this is darn near impossible. He may have had a little help from Michael Jordan with the bald thing, but nobody could mullet like Andre!

No athlete or celebrity in history has went from mullet to baldness so seamlessly! 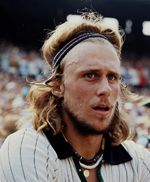 From our list’s flashiest tennis star to undoubtedly the most stoic, let’s shift focus to Bjorn Borg. The man from Stockholm, Sweden made his professional tennis debut at the green age of 16.

Bjorn won 11 Grand Slams. 6 of these were at Wimbledon and 5 of them at Roland Garros Stadium in the French Open. This illustrates the versatility of a true champion. Tennis is one sport, but every playing surface presents its own unique set of challenges.

No other male tennis star has a better winning percentage at Grand Slams than Bjorn Borg. He won an eye-popping 90% of his matches in these tournaments.

Fortunately for the other competitors on the tour, Bjorn Borg surprisingly retired at the age of 26. Even with the early start at 16, ten years is a very short career. Borg’s retirement was a shock to the tennis world, and even his ultra-persuasive rival John McEnroe failed in his attempt to convince Bjorn to continue competing.

In the years following his retirement in early 1983, Borg enjoyed the fruits of the laborious hours spent mastering the game of tennis. In 1991, he decided it was time for a comeback. Much had changed since he last competed including pros playing with a new graphite racket.

PLEASE NOTE:
Bringing a new illustration to the definition of stoicism, Bjorn refused the clearly more advantageous graphite racket for an old wood and string. Borg was unable to win one match on the tour in the graphite era with his wooden racket.

Bjorn’s old school attitude may have cost him his comeback, but it was undoubtedly imperative for his success on the tour. This is especially true for his early years on the tour as he had to become a man at such a young age. 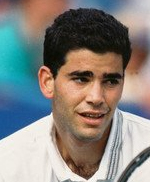 Let’s switch up the flow, and work our way backward through the career of Pete Sampras starting with his last match. It was 2002, 14 years after “Pistol Pete” joined the men’s pro tennis tour in 1988 when he faced off with his career-long rival Andre Agassi in the finals of the US Open.

Pete won that match and retired on top of the tennis world. In sports, it is far too often that we see athletes continue to compete long past their prime. Muhammad Ali, Michael Jordan, and now the UFC’s Anderson Silva have all hurt the hearts of their fans by not being able to let go of their competitive edge.

These guys are all in the conversation of the greatest of all time in their prospective sports. Why is going out on top so difficult for elite athletes? They have the money, accomplishments, and respect of the entire world.

Just like we see many times in life, people’s biggest strength is their biggest weakness. Neither Sampras, Jordan, or Ali would have ever been champions if they didn’t have superhuman levels of competitiveness.

This makes what Pete did at the US Open in ‘02 that much more special.

Working our way back into his glory years, Pete held the #1 ranking in the world at the end of the year for 6 straight years from ‘93-’98. He won a whopping:

It is his struggles on the clay playing surface that hold him back from the top two spots on our list. As dominant as he was in his career as maybe the best American male tennis player ever, he never even made it past the semi-finals at Roland Garros.

Born to a Spartan mother in Washington DC, Pete and his family moved to California when he was 7 years old so he could play tennis all year round. This, of course, turned out to be a priceless investment into a future champion. 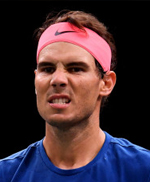 Sliding in at #2 on our list is the Spaniard Rafael Nadal. Rafy is, without question, the king of the clay. He excels on the red clay by using his signature slide to get to balls that most other pros simply cannot.

Nadal was able to win outside of the French Open several times throughout his career. According to ESPN.com, he won the US Open 3 times, with 2 victories at Wimbledon, and 1 down under at the Australian Open.

These accomplishments alone are good enough to net Rafael 100 million dollars in career earnings, and the love and respect of millions of tennis fans all over the globe.

Possibly the single greatest stat from the career of Rafael Nadal is his head to head record with Roger Federer. Nadal leads Federer 23-15 in their 38 previous matchups. He also has a .750 winning percentage at 9-3 against Roger in majors including a match many believe to be the greatest tennis match of all time at Wimbledon in 2008.

Their rivalry continues to this day as one of the greatest rivalries in all of sports. Even though Nadal hasn’t won as many titles/majors as Federer has, many tennis fans consider him the best ever based on their head to head matchups. I have to admit, it is hard to completely disagree with that logic. 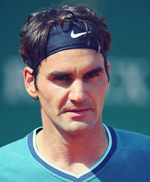 You probably could have guessed my #1 by the title of this article. Roger Federer was born in Switzerland in 1981 and is functional or fluent in 6 different languages.

He is the most well-rounded of any tennis player probably ever. He’s not overly powerful like Sampras, and not lightning fast like Nadal. He is smooth and technical, and that is enough. He isn’t the type of athlete that needs to play outside of their abilities to be great.

It was at Wimbledon in 2001 when Roger Federer faced what at the time was the biggest challenge of his young career. In a heated 5 set match, he was able to dethrone the 4-time defending champion, Pete Sampras, to reach the quarterfinals.

While he didn’t end up winning the tournament that year, their epic match was a passing of the tennis torch even if people didn’t realize it yet.

The same point I made about Nadal’s career being boosted by their rivalry can be made about Federer. These two guys are the best ever, they peaked in the same years, and above all played each other with class and heart.

No other player can touch his numbers, and no one other than himself and Rafael Nadal can say they were a part of the greatest rivalry in the history of tennis.

Tennis will always be exciting, but it will take at least 10 years for any up and comers to replace any of these guys in the top 5. One player cannot do it on his own.

Sampras’ serve needed Agassi’s return. Without Andre, Pete Sampras would not be the legend that he is. Bjorn Borg needed McEnroe and Connors to kick his butt and vice versa.

Federer needed the gutty physical play from Nadal to match up his smooth technical effortless skill. All of these players were made better by their rivals.

In competition, you either win or you learn. There’s no undefeated tennis champions for a reason. Tennis is a fight, and players must rely on their will just as much as their skill to win the match.