The Hunt for October: 4 NL Teams That Could Come From Behind And Win Their Division 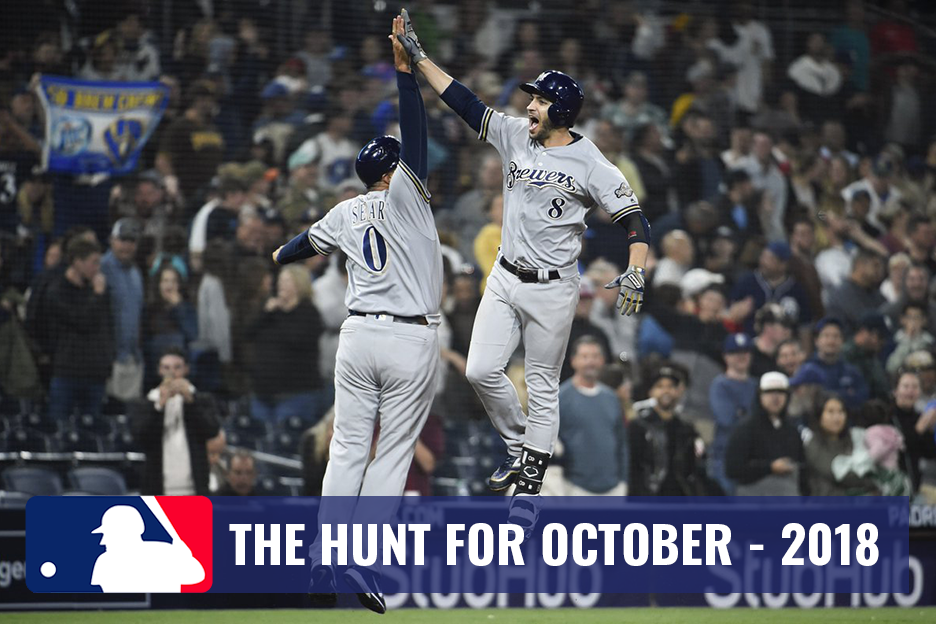 At this very moment, the woods are extra crowded for National League playoff hunt. The race has been tight all year in the East, Central, and West.

Current division leaders the Atlanta Braves, Chicago Cubs, and Colorado Rockies can each fall not only out of 1st place in a matter of days but out of the playoffs altogether.

The Braves have been surging on a west coast road trip this week just finishing up a 3-game sweep of the San Francisco Giants after they took three out of four in Arizona against the Diamondbacks.

They now hold a 7.5-game lead over the struggling Philadelphia Phillies. With 16 or so games left to play, momentum will have to shift dramatically for Philly to have a shot at the division.

Yesterday, Atlanta was (+1000) to win the division but following a win last night, their odds were pulled down.

As a Braves fan, though, I’m not celebrating just yet. They still have to play the Phillies in 7 of their last 10 games of the regular season.

Out west, we have the closest division race with only 3.5 games separating three teams.

The Colorado Rockies are ahead of the LA Dodgers by a game with the Arizona Diamondbacks poised in the third place spot.

Arizona has time to make up just 4 games but you wouldn’t know that from the betting line. BetOnline has the D-backs at (+1400).

In the Central, the Chicago Cubs have been atop the division for most of the year with Milwaukee not far behind and now we see the St. Louis “Playoff” Cardinals rearing their shiny red noggins and currently sitting just 3.5 games out of 1st place.

The Cards have some very long odds to win the Central but just a few games outside of first-place with 18 to play, (+1600) is looking rather tasty.

Are they playing the Red Sox every game for the rest of the year?

Why are the odds so high?

Today, I’ll answer these questions and we will find what team if any of them can grab first place in their division just in time for the playoffs.

The Brew Crew has hung around for a lot longer than people expected them to in a division race with the 2-time defending National League Pennant winners, Chicago Cubs.

Much of the media and many Cubs fans scoffed at the idea of a Brewers-Cubs rivalry but with less than 3 weeks left in the regular season and tied in the win column, Milwaukee has a viable shot at the Central Division crown.

Washington is finally waking up after playing like they were dead asleep for most of the season. It’s too bad because they have a lot of talent on that team.

They are definitely disappointed in themselves and it appears they want to take out a fair amount of self-hate on some other teams in the role of spoiler.

Looking at the Brewers schedule for the rest of the season, the series’ don’t look too intimidating. They will host the Pirates for 3 and then welcome the Cincinnati Reds to town for another 3 game series.

Neither of these teams has a chance to make the playoffs. Well, that’s not entirely true. The Reds have a zero percent chance, but Pittsburgh has a 0.1% chance according to ESPN.COM.

They will then travel east to the Steel City for three more games then head south to St Louis for a series with the Cardinals. This could be a great one as the Cardinals are only a game and a half back of Milwaukee right now.

For the final 3 games of the regular season, Milwaukee hosts the Detroit Tigers. Detroit has been abysmal in the second half of the season and is almost 30 games under .500.

So far I like the Brewers chances. Let’s take a quick look at the Cubs schedule.

After their game in the nation’s capital, the Cubs host Cincy, travel to Arizona for a gritty 3 games, and then back to the Chi-town to the South Side to play the White Sox.

They will then host the Pirates for a series and finish the season with three games in St Louis. Both have to play the Cards on the road, but the Brew Crew doesn’t have to travel all the way to Phoenix to challenge another playoff contender.

I give the schedule advantage to the Brewers. They are 2 back in the loss column as of today, though. I like their value at (+200), but there’s a team with just 2 fewer wins that has a much bigger payout.

Want to make a grand?

If that’s a little hefty, I understand.

Just divide by 2 if you don’t want much risk.

St Louis is 3.5 games back from Chicago at this moment.

Even though the Cards get the Brewers and Cubs at home, they still have to play them.

They have another tough series at home with the Dodgers coming up soon and three games in Atlanta. The Cardinals do have a reprieve, if you will, with the tanking San Francisco Giants.

It’s going to be a hard road for the Cards, but if they can make up 2 of the 4 games separating them and Chicago before their season finale series in St Louis, they will be poised to make us rich.

The Brewers and Cubs are less than 5 games over .500 each on the road this year away from their friendly confines, so watch out for the Cardinals.

The D-backs are currently 3.5 games out of first place in the National League West. If 4 games seem like too much, then skip the bet on the Cardinals and make your money with the D’backs.

Or heck, bet them both!

You increase your chances of winning with only adding minimal risk.

Let’s look at their schedule. I’ve heard it’s rather frightening, but let’s have a look for ourselves.

They finish up a series today in Denver, so they can make up a game right there.

Only 3 more games on the road trip, but the final stop is in Houston!

Ugh, the Astros are really good. The American League’s best seem to be superior to the top teams in the NL. Arizona should be able to avoid a sweep, but two out of three against the ‘Stros is pushing it.

They will have their next 9 games at home.

The Cubs will provide a challenge but in the series with Phoenix, I like their chances to win 2 out of 3.

The next two series are high on the difficulty scale but not without opportunity and reward.

The Rockies and Dodgers travel to the desert for what is shaping up to be early playoffs.

If the Backs can get hot at the right time down the stretch, they make the short flight to San Diego for the final series of the regular season with the bottom-dwelling lowly Padres.

The road is no doubt a difficult one, but it is a road lined with opportunity.

I would assume that’s what a wise man would say. I wouldn’t know.

LA is the favorite to win the West even though they are sitting 1.5 games back in second place. We will look at their schedule as well as the Rockies to see if the sportsbooks are onto something.

Continuing a road trip, the Dodgers have three in St Louis starting today. This is obviously a big series for both squads in their respective divisional races but they are also each looking for that final wild-card spot.

If the season ended last night, the Cards would have the edge over the Dodgers by 2 games. Yes, LA is the favorites to win their division but are very close to not even making the playoffs.

After the series with the Cards, the Dodger make the trip back to California to host the Rockies. These three games will shape the rest of the playoff hunt in the West more than any other.

After Colorado leaves town, the Padres pay their final visit for the season to Dodger Stadium. LA will be showing up with the brooms as they will probably need the sweep.

Then they hit the road for 3 in AZ and 3 in San Francisco. The Dodgers have a favorable schedule the rest of the way as well as an opportunistic one.

Three series with serious playoff implications and 2 against foes who are struggling and may have hung their hat on 2018 a bit early.

The Rockies who are (+100), by the way, play AZ and LA each for three games and they have the Giants and Nats on the schedule. So, their schedule is not bad either. There are opportunities and difficulties with some tanking team(s) mixed in there.

This really is a fun time of year. If you’re a teacher or a student, I apologize ahead of time.

The summer swelter is finally shifting to brisk mornings.

We know what this means for sports.

It means the genesis of football season as well as the hunt for October in Major League Baseball.

The National League has two divisions that pit three teams each in a very close race towards a divisional crown.

After breaking down the chances of the four teams currently outside of first place, I’ve concluded they each still have a good chance at pulling it off.

The Cards and D-backs both have the opportunity to make you some good money as their odds are set at (+1600) and (+1400), respectively.

The Brewers have stayed with Chicago all year and are poised to make their run.
I like the Brewers bet of (+200).
It has much more value than betting on the Cubs at (-250) or the Dodgers at (-120).

Remember to have fun and check out some online betting sites as well as the MLB scoreboard right before you make your pick as these odds are changing multiple times per day.