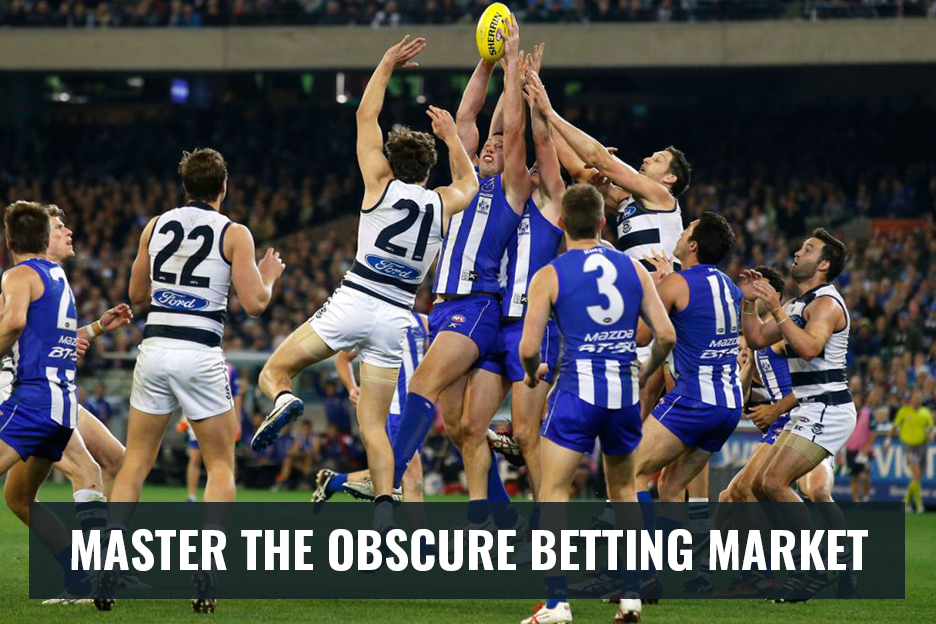 Thank heaven for the internet. Once upon a time, novelty betting was as frustrating as it was fun, due to the lack of broadcast availability in the United States and other countries. A gambler may have been an expert on Lithuanian professional basketball clubs or soccer teams in Serbia, but what’s the fun if they couldn’t watch the games or even follow the results in the newspaper?

Online media has turned that leaf over and set it on fire. If a sport is broadcast anywhere in the world, clever users can find a way to see it on a computer or mobile device. And that’s not even always necessary. Thanks to the interconnectedness of media in Europe and the United States, there are many more “obscure” events streaming on big screens in Las Vegas in 2018.

The first rule of mastering a strange or obscure sport or entertainment category at the casino is obvious – learn, learn, learn. Having in-depth knowledge of South Korean baseball or British cinema not only gives the bettor an advantage over impulse gamblers, but it can give them the upper hand on bookies, too. Often, sportsbooks feel obligated to offer odds on weird sports from lands far away, but they copycat the odds from other handicappers and don’t hire anyone to analyze results or film. The result is sloppy betting lines, which result in value if the proper pick is chosen.

But it’s not always enough to know your stuff. Every sport, every league, and every kind of bet has its own rules and its own tendencies. Understanding the character of an event – and understanding how casual Vegas bettors may make bad assumptions – is a fast track to finding a jackpot on sports buried deep beneath the headlines.

Second, it’s important to pick out something that can be observed in real time, and not just for live-betting purposes. It might feel like a scream to wager on a Jai Alai contest in Europe, but if you can’t visit the fronton or see the highlights, mistakes in betting strategy could repeat themselves. There is no substitute for seeing a sport live when trying to learn more about it.

Finally, don’t assume that any professional athletes are bad at what they do. A trash-talking fan might say, “There are only a handful of good hockey players outside of the NHL, and they all play for CSKA Moscow. Everybody else sucks.” But that kind of shallow shock-jock analysis is deceptive and dangerous. As a rule, nobody who gets paid a bundle to play professional sports actually sucks. CSKA Moscow doesn’t always win money for every bettor who picks the team to win. If that was the case, casinos would have stopped offering markets on them a long time ago!

Let’s apply those 3 principles of obscure-genre betting to a handful of relatively obscure sports, as well as a bonus section with tips on profitable betting outside of the sports world.

Did you ever wish that football’s special teams units would get to play an entire game? Hmm. Maybe not. But I’m here to tell you it’s not such a bad idea when you see it in action.

The Australian Football League is so obviously based on NFL football that it’s kind of charming. And yet the sport has a flavor all its own. Aussie rules is built on what fans consider the most boring play on the American gridiron… punting. But as opposed to a stand-still punter taking a snap and booming it downfield, Aussie rules athletes punt on the run, both as a means of passing the pigskin to a teammate and a method of scoring goals.

A punt through the center goalposts is a “goal,” worth 6 points just like a touchdown. A punt that misses the target slightly is good for a single point, just like an XP in America.

The most exciting play in the AFL is the “mark,” in which an athlete successfully catches a punt and thus maintains possession while advancing the ball for his team. Defenders often swarm around a mark attempt, prompting an acrobatic leap by the offensive player.

The Sydney Swans are currently favorites to win the AFL’s Grand Final at (+550) on futures boards. Sydney is rarely a shaky pick in a game or for a whole season, but futures and traditional moneyline betting are not the best wagers in the AFL.

The Aussie league is refreshing for the pride players take in every contest. While NBA teams “tank” looking for a lottery draft pick and NHL teams play accountants in goal late in the season to avoid risking an injury to a real prospect, AFL teams almost always try very, very hard. Live betting is the best option – pick a team that appears bruised and beaten at halftime at long point spread odds. A weaker squad like Brisbane won’t always come back to win straight-up, but they won’t go down without a rally.

Did you ever want to see a bunch of racers drive through a forest instead of a track? Even if the answer is no, rally racers have been doing it for massive crowds over a long span of time.

Rallies are held over stretches of road closed to other traffic. There are asphalt mountain passes, rough forest tracks, ice, and desert. Navigators are used to alert drivers to the hard obstacles ahead. The World Rally Championship features stages on several continents.

I’ll keep my betting advice on rally races short and sweet. Rallies are similar to dog sled races in that drivers and teams who try to front-run early in the competition are often desperate and foolhardy. The automobile’s health must be saved for the long haul.

If you want to bet on a guy whose car ends up stuck in a tree like “The Antichrist” Land Rover in The Gods Must Be Crazy, bet on the upstart front-runner. To actually win the bet, wager on experienced drivers who know that the tortoise beats the hare.

The experienced and savvy tortoise (okay, he’s pretty fast for a tortoise) Sebastien Ogier of France is the current favorite for the 2018 World Rally Championship at (+110) odds.

Many sportsbooks offer prop-bet markets on world political events. While it’s not everyone’s cup of tea, it’s probably one of the finest categories of betting to find value in.

Don’t worry; your favorite sports-gambling blog is not about to offer any political opinions. It’s not my job, and besides, it’s no fun compared to winning money! Value is created wholesale in many political and hard-news betting markets thanks to the Wild West nature of modern media.

For instance, President Trump’s odds for impeachment opened remarkably short at many books, probably shorter than they should have. Why? Because global media strongholds are based in locations where Trump is less popular, like London, New York, and Toronto. Read the tabloids in any of those cities, and it feels like the POTUS is going to get thrown out of office tomorrow. That impacts the betting action and the lines.

Read the news in Poland, and it will feel more like Trump is a normal President with a normal amount of controversy. That’s because the media is more conservative in Poland. Yet Warsaw’s press doesn’t have the global influence of the New York Times or CNN.

The Donald’s current prop odds to finish his first term without being ousted are (EVEN) at Bovada, a tantalizingly strong “yes” wager considering that almost all US Presidents have stayed put until voted out or ineligible to serve again.

Take another popular prop bet – the odds of North Korea starting a war. Again, value goes in the “no” column because countries in which North Korea is most vilified – the United States, Western Europe, and Japan, to name a few, control the news narrative. Chinese and Russian media are not consumed at a massive clip in the West, so even if those journalists paint Kim Jong-un in a more peaceful light, it doesn’t matter. Gamblers in the United States are hearing the darker narrative.

Online Gambling sets the Over/Under date for DPRK’s next ballistic missile test as July 4th, 2018. Even a mad dictator with a mean streak would hesitate to offend the US Navy with a rocket launch on Independence Day, so we can safely say that the market won’t result in a push.

The second-best ice hockey league in the world is the Russian KHL, with other fine leagues in Sweden, Finland, and Switzerland close on its heels. The NHL’s main advantage over the Euro clubs is goaltending. Say what you will about Sidney Crosby vs. Ilya Kovalchuk or Connor McDavid vs. Nikita Gusev, the National Hockey League is deeper in above-average talent… starting between the pipes.

But a popular misconception of European hockey leads to excellent live betting and O/U bet opportunities. It’s true that the Euros play on a bigger rink with more of an emphasis on finesse. That leads American gamblers to believe that games in Europe must be higher-scoring and more volatile in the 3rd period.

In fact, the opposite is often true.
When a club in Finland or Latvia grabs a 2-goal lead and decides to sit on it, the shinny can become as dull as a stone knife. After all, it was the Europeans who invented the infamous “left wing lock” and “neutral zone trap” defensive systems that leagues in Canada and the United States have all but tried to ban teams from using.

No, the goaltenders can’t close the door like Martin Brodeur. But Euro shooters aren’t as aggressive and don’t crash the net as brutally as state-side snipers do. Plus, the big ice surface helps marginal goaltenders play the angles. Besides, when everyone on the team is closing the defensive gap and clogging up center ice, precious few quality shots will be mustered.

A great betting strategy is to live-bet against a powerful Euro team like SKA Saint Petersburg when they’re losing by a goal or 2 on the road against a weaker opponent. Another strong tactic is to bet the under in a game where the goaltenders are considered weak and the skaters dangerous.

Kovalchuk could score a hat trick at any time. But the contest could also devolve into a bore as soon as either side grabs a solid lead. The under can be a good bet even when Euro goalies look leaky.

Find Your Own Niche

The 4 markets listed here only scratch the surface of obscure-genre betting. Remember that the less attention casinos pay to a given sport or event, the less their handicappers have looked deeply into the potential outcome.

Take advantage… but take some time to research first. It’s the only consistent way to beat the bookie.