Where Will Manny Machado Play Next Season? 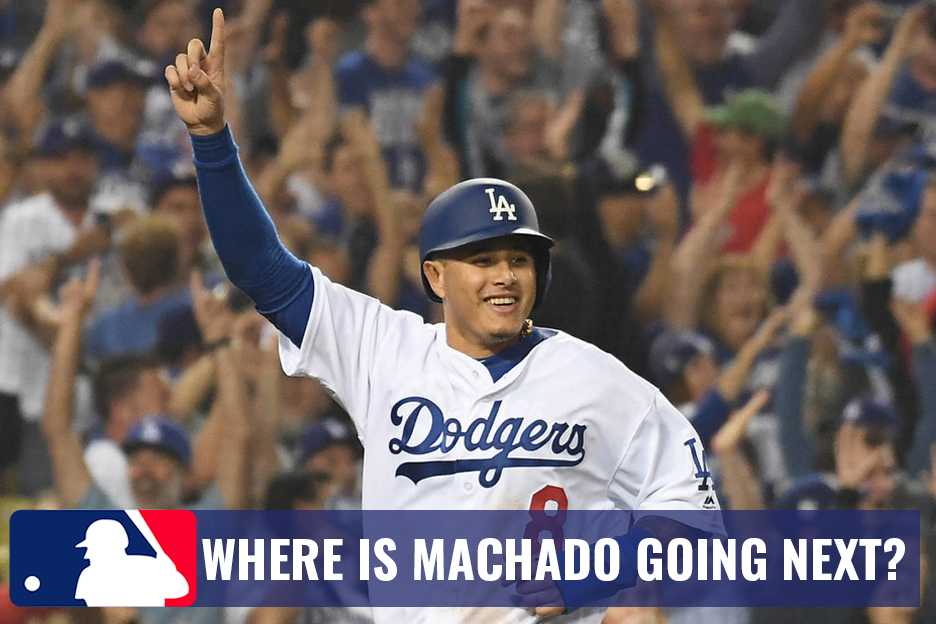 The Dodgers gave it a good run but in the end the Boston Red Sox were too much to handle in what resulted in a 4-1 World Series loss to the best team in baseball.

You have to hand it to L.A. They anteed up at the trade deadline to nab Manny Machado among other pieces to bolster their chances at their first World Series title since 1988, but it ended up being the Red Sox year through and through.

The interesting case with Machado going to the Dodgers was that it was widely regarded L.A. would not be involved in the Machado free agency sweepstakes, making him a pure rental for the club. Machado was playing a shortstop position that was vacated early in the season when young shortstop Corey Seager went down with a season-ending elbow injury.

In fact, Seager also underwent hip surgery in August as well, but the expectation is he will be 100% ready to go on opening day 2019.

As a result, let the Machado sweepstakes begin.

He’s said to prefer playing shortstop over third base for the long-term, so when handicapping which team will land the slugger, we need to consider teams with a need at shortstop and shortstop only for now.

Whether his antics in the postseason will hurt his next contract remains to be seen. Machado turned into a postseason villain among Brewers and Red Sox fans especially while controversy seemed to follow the superstar at every turn.

There were also a couple instances of Machado not running hard out of the batter’s box in these playoffs. If a player doesn’t put maximum effort into the World Series, it stands to wonder what type of player you might be getting. I am of the opinion that this postseason hurt his wallet a little bit, at least enough for me to confidently believe Bryce Harper’s contract will be the much bigger of the two.

Still, there’s going to be a market here. Machado’s bat did a lot of talking as well in the playoffs while he’s been worth at least 6.2 WAR in three of the last four seasons. He’s still in the conversation as the top shortstop in baseball.

With all that in mind, Bovada has released odds for which teams the top free agents in baseball will sign with in free agency.

It’s going to require some deep pockets to land Machado, so you aren’t going to see odds for small-market teams to win his services. This guy is going to squeeze out every dollar he possibly can.

Let’s take a look at the odds for teams to sign Machado, as per Bovada.

It’s been rumored that the Phillies are going to give it their all to sign both Machado and Harper, however, it’s unheard of for a club to hand out about $600M in a single offseason. With that in mind, I see shortstop as a bigger need for this club than I do the outfield which is why I believe Machado ends up in Philly.

Clearly, the Phillies identified a need at shortstop this past season as they went out and traded for veteran middle infielder Asdrubal Cabrera to take over shortstop duties on a full-time basis. Cabrera is now a free agent himself, so the need has reopened.

As it stands today, youngsters J.P. Crawford and Scott Kingery would be the most logical options to assume shortstop duties.

While giving up on young players is not the most prudent of moves, the Phillies could make a monumental upgrade at the most important infield position, on both sides of the ball, and use either Crawford or Kingery as a utility player or use them as trade bait to upgrade the club elsewhere. It’s also possible that either player can head to the minors to find their stroke and/or confidence.

Regardless of how you slice it, Machado is a huge upgrade for a Phillies team that ranked 21st with a .308 wOBA last season. They were also one of the more undisciplined teams at the plate with a 24.8% strikeout clip on the season, the third-highest mark in baseball.

Looking at the other teams here, I like this pick even more despite the Phillies providing the shortest odds.

As mentioned, the Dodgers are getting a star in Corey Seager back at short, and they have a handsomely-paid Justin Turner at third base. No need there.

The Yankees have a productive bat in Didi Gregorius at short and the likely AL Rookie of the Year Miguel Andujar at third. They also have a much more dire need on the club in the starting rotation. As one of the best offenses in baseball last year, an expensive offensive upgrade is unlikely.

Miami is a few years away from competing and I don’t see Machado interested in playing in that market at this point.

The Angels have a high WAR shortstop in place with Andrelton Simmons who accumulated a 5.5 mark last season. I doubt he gets displaced. The only way I see the Angels landing Machado is if he agrees to a switch back to third base. I don’t mind the Angels as a longshot value play if he wanted to team up with Mike Trout.

Dansby Swanson hasn’t worked out for the Braves to this point at shortstop, but he’s only 24. Perhaps Machado sees the upside in signing with Atlanta in a relatively weak National League East, especially so if the Phillies don’t sign Harper. Atlanta is also a decent value play here.

Lastly, the Nationals are headed in the wrong direction as a team while Trea Turner is most likely locked into the shortstop position for the long haul. I don’t see either side wanting this enough for Machado to end up in the Nation’s capital.

At the end of the day, I see the Phillies making the biggest push while they also have the biggest need. The Braves’ need isn’t as big and I don’t think their desire to land marquee free agents is at the level the Phillies are at after a terrible second half last season. Again, this is only feasible for the Angels if Machado moves to third base, which is not likely to happen. Being overshadowed by Trout may not be to his liking, either.

That leaves the favorite Phillies to get this thing done. I am confident in Machado donning Phillies colors in the City of Brotherly Love next season.