Which Underdogs Have a Realistic Shot in NFL Divisional Round? 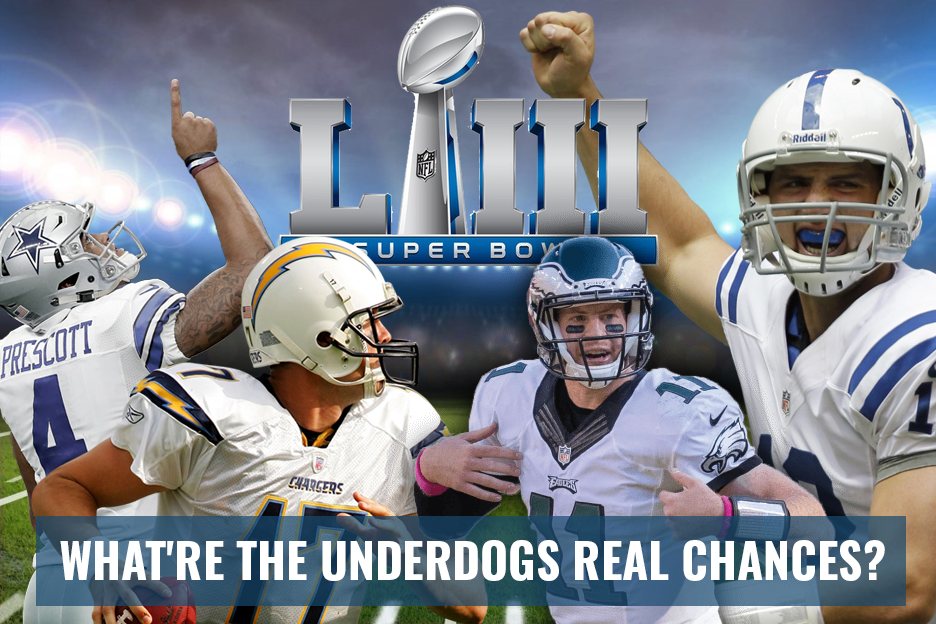 The Wild Card round is in the books, and it was nothing short of a fantastic weekend of football. Underdogs made a ton of noise on Saturday and Sunday, going 3-1 straight-up and a surprising 4-0 against the spread. That’s a testament to the fact that this year’s playoff field is completely loaded, as a legitimate case can be made for any of the eight remaining teams to win Super Bowl LIII.

However, the wheat really gets separated from the chaff this weekend. The top two seeds in each conference had last week off, and they will play host for this week’s divisional round games. Quite simply, the four home teams had last week off for a reason: they are the best that the NFL has to offer in the wake of the regular season, and they are the favorites to reach the big game as a result.

All that said, we received further confirmation last week that there’s a lot to be said for getting hot at the right time. This week’s four road teams certainly fall into that category, but can any of them get the job done this weekend?

Let’s take a look at all four underdogs and determine their chances.

The AFC #6 seed Indianapolis Colts head to Kansas City to face off with the #1 seed Chiefs on Saturday afternoon. The Colts are fresh off of a dominating win over the AFC South champion Houston Texans, and they have been playing lights out football since turning things around after a tough 1-5 start to the season.

The Chiefs opened up the year red-hot, but they came back to earth as the season moved along. In the early going, it seemed like no one had any answers for QB Patrick Mahomes and the team’s explosive offense. The Chiefs still put plenty of points on the board in the second half, but they would find it more challenging to do so as defensive play improved across the league.

In a nutshell, we can give the edge to the Chiefs on offense and to the Colts on defense. However, there are caveats for both statements. While the Chiefs are technically more explosive on offense, the Colts are no slouches either. Andrew Luck has returned to the ranks of being a Top 5 QB in the NFL, and this offense can put up points in a hurry.

Defensively, the Chiefs have been exposed numerous times this season. However, the team does have a pretty solid pass rush, and they seemingly subscribe to the theory of making the big stops at the right time. The Colts defense has been a revelation this season, as defensive coordinator Matt Eberflus has built himself a dangerous unit which can put a hurting on opponents.

Bottom line: The Colts have gotten hot at the right time, and they are playing more like one of the top squads in the league as opposed to a #6 seed. They are a dangerous team that no one wants to face, and they are a very live underdog as a result.

In order of confidence, we’ll take the Colts +5 in what should be a competitive game. It wouldn’t be a surprise to see them win outright either, so we’re very comfortable placing a money line bet to boot.

The NFC #4 seed Dallas Cowboys advanced to the divisional round after a hard-fought win over the Seattle Seahawks on Saturday night. They’ll be heading out west to take on the #2 seed Los Angeles Rams, a team which also sprinted out of the gates before coming back to earth over the final month of the regular season.

Things weren’t looking that promising in Big D earlier this year as the club sat at 3-5 at the halfway point. The team would wake up in dramatic fashion from that point and close out the season as one of the hottest teams in the league. For the Rams, they cooled off after a scorching 11-1 start and finished up the year going 2-2 over their final four.

The Rams have an explosive offense which can go back and forth with any team in the league, so they get the nod on that side of the ball. That said, the Cowboys offense improved significantly down the stretch. The acquisition of wideout Amari Cooper was a game changer, and QB Dak Prescott’s play improved significantly from that point.

We’ll give the edge to the Cowboys on defense, but the Rams are very far from push overs on that front. The Rams get the edge on protection and turnover margin, two of the little things which can make a huge difference over the course of a game. In short, the Rams are the better on paper, but that’s mitigated by the fact that the Cowboys are playing exceptionally well.

Bottom line: Oddsmakers have installed the Rams as a touchdown favorite, but that looks to be a bit too generous. The Rams team which closed out the year was different from the one which opened things up by rolling over everyone in their path.

There’s value in the Cowboys plus a touchdown, as the Rams may have a tough time putting up a boatload of points on this stout defense. Looking for the Cowboys to win outright may be too much of an ask, but we’ll take them +7 all day.

Perhaps the most challenging game to handicap of the entire weekend takes place in the early window on Sunday afternoon. The AFC #5 seed Los Angeles Chargers handled business last week versus the #4 seed Baltimore Ravens, and their reward is a trip to Foxboro to face off with the #2 seed and defending AFC champion New England Patriots.

The Chargers may be the most complete team in the AFC. They can get the job done on both sides of the ball, and this looks like the best Chargers team put together since Philip Rivers first lined up behind center back in 2004. As per usual, the Patriots are one of the more solid teams in the league, but there are chinks in the armor to be found.

The stats are nearly a wash across the board. The only significant edges to be found are for the Chargers in pass defense and pressure, and for the Patriots on protection, turnovers, and penalties. These two clubs are evenly matched, and the spread on a neutral field would likely be a pick’em.

The Chargers have looked more impressive on an overall basis, but they have had some hiccups, including a thrashing at the hands of the Ravens back in Week 16. They exacted revenge for that defeat, but the Ravens also provided a good blueprint for how to make life difficult for the Chargers. The Patriots had a pair of two-game losing streaks this season, and that has given rise to plenty of chatter that we’re witnessing a dynasty on its last legs.

Bottom line: The Patriots are being dismissed by many observers, and that just reeks of being a mistake. While we’ll acknowledge that something seems off about this year’s team, the team has had the last laugh on critics far too many times over the past two decades.

This has the makings of a game that will come down to the final minute with a field goal deciding things, so we’re happy to take the Chargers plus the points. It wouldn’t shock us to see them win outright either, but we can’t confidently call an upset over the Patriots at home in a playoff game and feel good about it.

The NFC #6 seed Philadelphia Eagles seem to be on another magic carpet ride. The team stepped its game up substantially down the stretch to secure a playoff berth, and they followed that up with an upset win over the Chicago Bears on Sunday. Just like last year, QB Nick Foles has taken over for an injured Carson Wentz to lead the charge.

The #1 seed New Orleans Saints are the favorites to win this year’s Super Bowl. They clearly looked like the best team in the league during the regular season, and they have home field advantage throughout the NFC playoffs to boot. QB Drew Brees has been playing like a man on a mission, and the team is quite dangerous on both sides of the ball.

The Saints have the clear edge on offense, while defense is a wash. Miscellaneous stats are in the same neighborhood, with the notable exception of turnover margin. The ball wasn’t bouncing the Eagles way for much of the season, but much of that was to due to the fact that the club resembled one which was suffering through a wicked Super Bowl hangover for much of the season.

These two teams squared off back in November, and the Saints took the Eagles behind the gym and pummeled them to the tune of 48-7. It’s important not to read too much into that drubbing, as the Eagles have looked like a vastly different squad since then.

Bottom line: The Saints are the better team on paper, and they are Super Bowl favorites for a reason. However, we can’t dismiss how much the Eagles have stepped their game up yet again with Foles behind center.

The strong recent play of the Eagles makes an 8-point spread look awfully appealing. This should be a much closer contest than the last time these two teams hooked up, and we would expect the Eagles to keep the margin to seven points or less. An outright upset is a long shot, but we can certainly understand those who believe in the magic of St. Nick giving it a shot.