Will Aaron Rodgers and Danica Patrick Still Be Dating on Super Bowl 53? 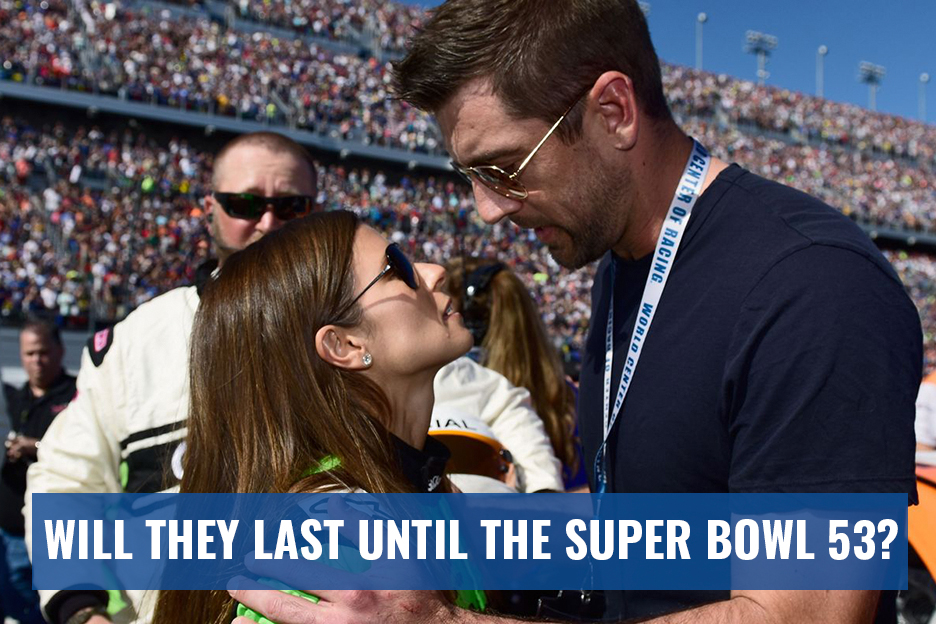 He’s no longer dating Olivia Munn, but Aaron Rodgers has himself another dark-haired beauty in the form of former NASCAR driver Danica Patrick.

Patrick is no stranger to the dating game either, but she has been through one divorce to this point. The 2008 Indy Japan 300 winner was married in 2005 to a physical therapist by the name of Paul Edward Hospenthal, but that marriage deteriorated and the two divorced in 2013.

Patrick then dated fellow driver Ricky Stenhouse Jr. from November 2012 through December of 2017. One can only hope that the overlap between Stenhouse and her ex-husband was only due to lack of time efficiency in divorce proceedings.

The only high-profile relationship we’ve seen Rodgers go through was the courtship with the actress Munn which ran from 2013 to 2017.

In February of 2018, Patrick and Rodgers hit it off and remain a couple through the midway point of the 2018-19 NFL season.

Of course, celebrity relationships tend to come and go quite often. That’s the case with us significantly less-popular people as well, but the glorification of celebrity lifestyle seemingly makes these types relationships endure high turnover.

So far, that hasn’t been the case with the former two-time NFL MVP Quarterback and the former racecar driver.

While it appears Rodgers and Patrick are going strong, one can never know what’s going on behind closed doors. The folks at TopBet have allowed us to wager on whether or not this couple will stick together through Super Bowl 53, scheduled for Sunday, February 3rd of 2019.

Will Aaron Rodgers and Danica Patrick Still Be Dating on Super Bowl 53?

When betting futures, we look for value. Of course, I don’t see much value in this pick at -1000.

With that said, I do think the couple lasts through Super Bowl 53. If you want to swallow a lot of juice, go for it. Clearly, the value in this one is the no. If you are making a bet here, the No is clearly the only choice that holds value.

This couple clearly has busy schedules between the two of them. One would have hoped that they discussed the grind of the NFL season as a time where they aren’t going to spend a lot of physical time together, which we all know is the key to any successful relationship… right?

With Rodgers on the road so much during the season, Patrick has time to focus on her current business ventures which features her own brand of wine called “Somnium” as well as her own brand of athletic wear called “Warrior by Danica Patrick”.

Also worth noting is just how long the NFL offseason is. Preseason games begin in the second week of August before the season opens in September. With the Super Bowl in early February, we can count most of this month as offseason. Therefore, there are roughly six months of offseason in the NFL not including things like OTAs and such. In contrast, the MLB has three full months off, the NHL is roughly three months from the Stanley Cup to the start of training camp and the NBA is about a week behind the NHL.

PLEASE NOTE:
The NFL has by far the longest offseason of the four major North American sports. Therefore, Rodgers and Patrick get a ton of time in the offseason to spend with one another including some of the most lavish vacations one could imagine.

There is also the fact that Patrick is a likable woman. If she is indeed a wonderful lady like it appears she is, she would not break up with Rodgers during a season in which the Packers are vying for playoff contention. That’s just heartless, isn’t it?

Of course, vying for playoff contention and making it to the Super Bowl are two different things for Rodgers’ Packers. If Green Bay doesn’t make the Super Bowl, the Packers’ season would end on January 20th at the latest. If they don’t make the playoff, Rodgers wouldn’t be playing football after December 30th, giving the duo roughly five weeks to part ways before the Super Bowl.

The best thing for the Yes is for Rodgers and the Packers to make it to the Super Bowl, as I don’t think they break up during the season. If they don’t go that far or don’t even make the playoffs, the No bettors are looking better with some nice value.

Since they began dating in February 2018, this question is basically asking the Rodgers/Patrick relationship will eclipse the one-year plateau.

I think it does, although that’s a lot of juice to swallow with the yes.

*This article used information from Wikipedia