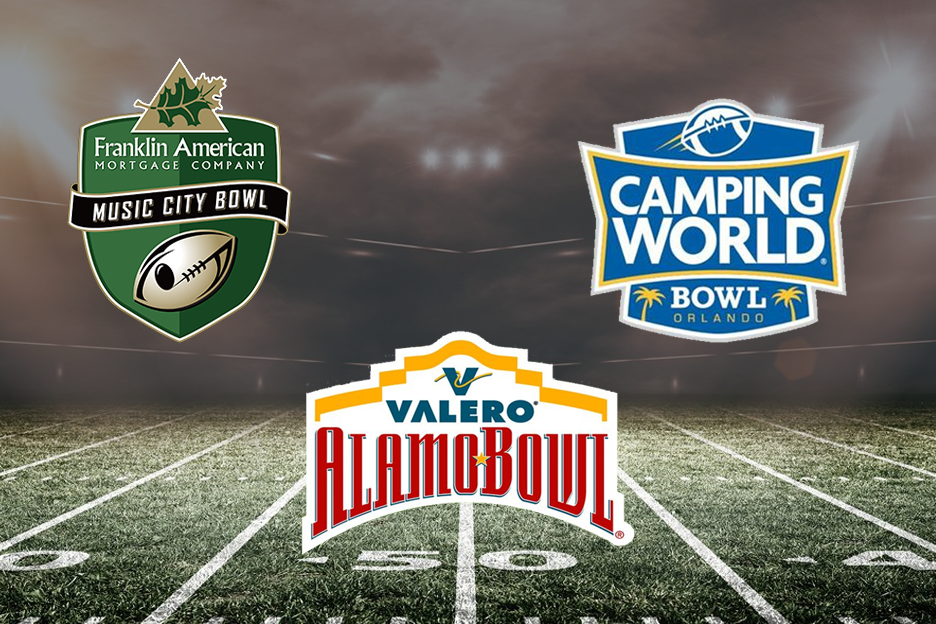 College football bowl season has been kicked into high gear with nail-biters and blowouts both having their turn.

The game between Vanderbilt and Baylor last night was one of the better “lesser” bowl games I’ve seen in recent years. There are three more games to look forward to on Friday and they all have tight spreads between three and 3 ½ points.

And among this slate, I’ll be giving you my favorite wagers of the day while breaking down the Music City Bowl, Camping World Bowl, and Alamo Bowl.

The first features the Jekyll and Hyde’s matchup between Purdue and Auburn (-3.5).

Both these teams have a lot of potential but have only shown it in spades this season. Auburn knocked off Washington and Purdue beat up Ohio State. But these are also the teams that lost to Tennessee and Eastern Michigan respectively.

The next game will be between West Virginia and Syracuse (-3) at 5:15.

The Mountaineers were previously heavy favorites before QB Will Grier decided to sit out the game to prepare for the NFL Draft. West Virginia will also be without star wideout Gary Jennings (ankle injury).

Syracuse, on the other hand, has plenty of their own injuries. But it shouldn’t have much effect on their high-powered offense, led by QB Eric Dungey.

And speaking of high-powered offenses, Washington State (-3) will be playing in the nightcap (9:00), the Alamo Bowl. Their opponent will be a gritty Iowa State team. It’ll be interesting to see how Cougars QB Garner Minshew performs against one of the better defenses in the nation.

So here are the best bets from this wonderful trio of bowl games. All odds are provided by Bovada.

Both of these teams come in with a lot of questions. And that’s not to say fans don’t know the teams’ identities well. They’re just not sure which version of them they’ll be getting.

A Purdue team with plenty to play for and lots of motivation is a dangerous team. An Auburn team that puts it all together offensively is extremely scary. But which of these is more likely to happen?

With Jeff Brohm deciding to return to the Boilermakers, this squad has gotten a huge motivation boost. So many people thought he was going to bolt back to his alma mater, Louisville. The fact he didn’t will give this team more energy.

Auburn has plenty of talent to mask a team’s momentum. But it’d be nice if they had some “Uncle Mo” with them as well. Besides a convincing win over Texas A&M, they really didn’t have many statement games down the stretch.

And when it seemed their defense could at least be trusted, they went and gave up 52 to Alabama. Gus Malzahn probably isn’t fighting for his job and that may actually be a bad thing for Auburn. He’s also being gutsy by taking over play-calling for the bowl game.

The biggest matchup in this one will be the Purdue passing game against Auburn’s secondary. This is the 16th-ranked pass defense for Auburn, according to S&P+. Most SEC secondaries don’t mess around. But this is also a team that has allowed big plays (87th) at a high frequency.

Purdue has a top-25 passing attack to nearly match them and guys with “SEC speed”. It doesn’t take you long to figure why they’re 7th in explosiveness. True freshman WR Rondale Moore is a special player with intense acceleration and makes a lot of defenders miss after the catch.

Between his burning wheels and D.J. Knox’s abilities (5.8 YPA) on the ground, this is an imposing foe for this Auburn defense. The explosiveness of Purdue is really the only major separation between the Boilermaker O and Tiger D.

As for the Tigers offense, their 2017 squad would’ve had a field day with this 82nd-ranked defense. But with Kerryon Johnson not around this year, there were several holes found on this side of the ball. They aren’t nearly as physical in the run game, and quarterback Jarrett Stidham has fallen off considerably.

RB JaTarvious Whitlow had given them a boost before only having 103 yards and a 2.9 average against his last three Power Five opponents.

Besides, against Purdue, you need to whether be able to stop big plays (example: Michigan State) or have a game-changing offensive playmaker (Jonathan Taylor, Wisconsin). The Tigers don’t have that. And they seem to cover up several of Purdue’s issues on early downs too.

With momentum and motivation on their side and the one major game-breaking factor, I’m going with Purdue to at least cover and will throw a little on the money line as well.

Who would’ve thought that Syracuse would come into this game as field goal-favorites?

But that was before Will Grier decided to skip the game and before Gary Jennings was ruled out. Now it’s almost as if the offense has lost its face and one of its legs.

Backup QB Jack Allison has had time to prepare for a defense that’s in the middle of the pack (60th). He still has red zone freak David Sills V (15 receiving touchdowns) and Marcus Simms (15.2 yards-per-catch).

But there’s no underestimating the loss of a top-five college quarterback and his number one receiver. Especially when your defense could easily get buried.

Syracuse is averaging over 40 points per game. WVU gave up 104 total in their last two games, both losses. The best offenses they played this year were Oklahoma, Oklahoma State, Texas, and Texas Tech. Those opponents averaged almost 45 points-per-game against the Mountaineers.

And only one of those teams, Oklahoma, had more point production of Syracuse. Against another beastly passing attack that thrives in the red zone and in late down/short yardage situations, I’m not sure WVU can keep up.

This would be a whole different game with their best two players on the field. And the Mountaineers had shown to be taking some strides up front on defense. But that disappeared with only two sacks in their last two games.

With ample time to throw, Eric Dungey will pick apart a defense. And he offers a scrambling ability the Mountaineers can’t stop. Just ask Kyler Murray (Oklahoma) or Sam Ehlinger (Texas). The better QBs have dominated this team and I see that continuing by them giving up another 38-41 points.

Relying on their run game to cover everything up will be tough. Kennedy McKoy and Martell Pettaway have had great seasons, but only when feeding off the balance of the passing game that’s opened defenses up.

WVU seemed like a lock with the explosiveness and efficiency they had in the passing game. Now, despite the mystery with Allison, there certainly won’t be that same wide-open success. And that’s why Syracuse should win.

But in this instance, I’m going to go with OVER on the point total of 66, with the Orangemen putting up around 40 on WVU.

For as wonderful and nutty as Mike Leach’s mind is, there is one clear weakness he’s had in the past. And that’s bowl game spreads.

Ok, so it’s not like Leach himself would care much about that.

Still, for bettors, seeing he’s 5-9 is cause for concern. People had been saying the opposite about David Cutcliffe this bowl season. He came into Duke’s game yesterday with Temple at 8-2 against the spread in bowl games. Make that 9-2 now after a 56-27 shellacking of the Owls.

Though Leach has thrived with the Cougars, everyone saw what happened when Washington State finally ran into a good defense. They crumbled in the snow, with 15 points and star QB Gardner Minshew having only 152 yards with two picks and no TDs.

Against top-30 defenses like Iowa State, the Cougars scored an average of 20.6 points. That’s a huge drop-off from the 38.3 they averaged overall.

The Cyclones are coming into this game hungrier than ever. This program is starting to build up a lot of steam. While the Cougars fell when it mattered most, Iowa State has built up a lot of momentum by winning seven of their last eight games.

This is a team that’s only given up 22.5 PPG this season despite playing the 1st, 9th, 14th, and 16th-ranked scoring offenses. They held West Virginia to 14 points and completely shut down Grier. They could easily do the same to Minshew.

Even with a little fall-off late, Iowa State is 23rd versus the pass and is efficient enough on a play-by-play basis to limit one of Leach’s more methodical offenses. And Leach may be an incredible mind. But if you sleep on ISU’s Matt Campbell, he will torch you.

I think this will be another coming out party of sorts for the Cyclones.