Paddy Power is a publicly quoted company listed on both the UK and Ireland stock exchanges. They are also Ireland’s largest bookmaker with 150 walk-in betting shops and a phone in business larger than all their Irish competitors.

At Paddy Power, you’ll find sports gambling, online poker, bingo, casino games and spread bets all accessible from a single account balance. While there are ton of great reasons to join their site, my personal favorite reason is their in-play platform. 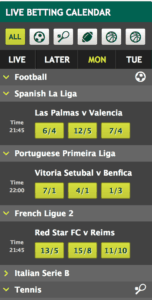 The first thing worth noting is Paddy Power has a fabulous In-Play calendar that can be used to quickly find a list of matches for any particular sport where in-play wagering will be offered.

Most bookmakers only list a simple “today” and “tomorrow” schedule, while at PaddyPower you can easily see that a match held a week from now will have in-play offered. This information is invaluable to handicappers who wish to prepare well in advanced.

It’s also the most user-friendly interface for in-running wagers that I’ve come across (and since I’m operating a site called “LiveBetting.Net”, you can probably tell I’ve seen quite a few of them).

10 points to Paddy for having a well-designed betting platform.

Tennis is by far the most popular sport for In-Play wagering. You’ll find numerous matches broadcasted live on their website in a section called “Paddy Power TV”. Even if a match isn’t streamed by them, a simple Google search should lead you to an alternative website where you can watch the match.

For tennis you can make live wagers on which player will win the match, set and game. You can also wager on total number of sets, correct score of a given set, and all sorts of other unique propositions. 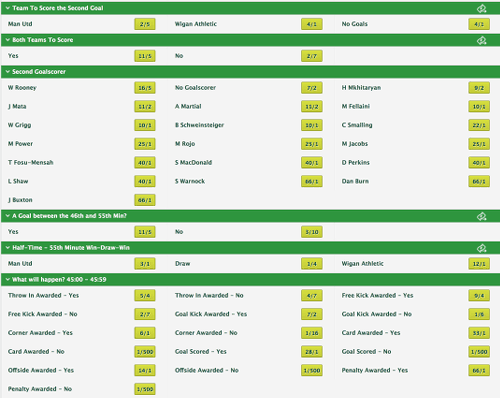 Soccer is hands down the most popular sport wagered globally, so as you might imagine, there is no shortage of in play matches offer for this sport.

For matches that you can be on live, you can wager on the standard win-draw-win, draw no bet, team to score next goal, double chance, whether or not a team will score at all in the match, who will score the last goal, will there be a goal during specific 10 minute time intervals and total goals for each team.

During the early going when the game is still nil-nil there is a wagering option on when the first goal will be scored for each team (1st Half, 2nd Half or No Goal).

I could keep going on covering all the bets offered, but will just leave it that there is some twenty or so additional markets offered in their in-play wagering platform. 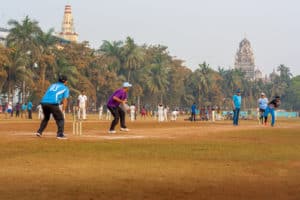 Paddy Power is hugely popular in Ireland and the UK so you’d figure this is where there cricket coverage would be most focused. This, however, is incorrect – Paddy is also hugely popular with India punters and as a result Indian Premier league gets massive coverage on their website.

Of course you’ll find Australian Cricket, International Test Series and One Day Internationals (ODIs) as well. I’ll just mention quickly that for cricket there are tons of wagering opportunities in-play for each fixture. You can wager on the result of each at bat, bowl, total 6’s, total 4’s, next dismal and the whole nine yards.

What I want to touch on briefly in this section is Twenty 20 cricket in-play betting strategy.

In Twenty 20 cricket it is extremely common for both teams to be down to odds 3/1 or even 6/1 at some time in the match. It’s amazing how often one team will bat through their 20 overs with a low score and still win the match, or how they’ll bat for an amazing score and still lose the match.

Live cricket betting is a highly volatile market and for that reason I’ll warn you it rarely ever makes sense to bet steep favourites. If you want to beat Paddy Power, live bet on Twenty20 or even ODIs and Tests, stick to underdogs.

Yes, you’ll win less often, but when you do win the payouts will be larger. I’m convinced that the bulk of value in cricket can be found live betting on teams who are at the moment a considerable underdog.

The site has decent coverage of both European and NHL ice-hockey available for in-play wagering. You won’t however find a plethora of markets the same you will with tennis, football, or cricket, but you will find the ability to bet the handicap (puckline) as well as the 3-way win-draw-win markets for regulation.

The major benefit here is very few online sportsbooks offer live hockey betting, so this is a rare offer that hockey fans will want to take advantage of at PaddyPower.com. 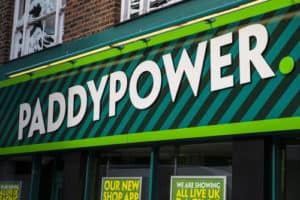 The website might have an Irish feel, but no matter where you live in the world, their markets are more than ideal. The only countries they restrict are United States, Canada, France, Netherlands, Puerto Rico, Iran, Iraq, Myanmar, North Korea and Pakistan.