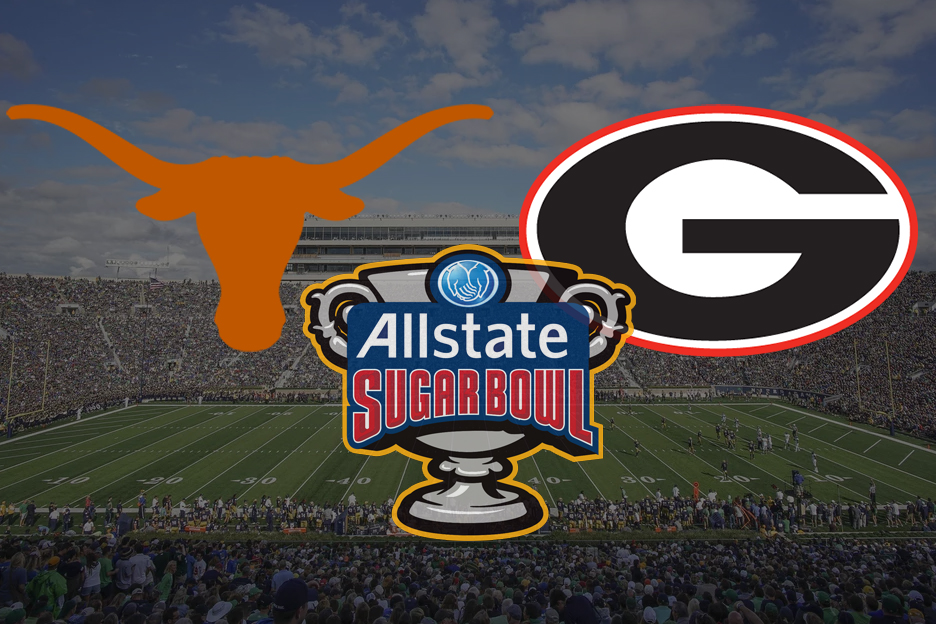 The nightcap of a solid New Year’s Day lineup of bowl games looks to be a real dandy. The 9-4 Texas Longhorns meet the 112 Georgia Bulldogs in the Allstate Sugar Bowl, a game that kicks off at 8:45 PM EST from the Mercedes-Benz Superdome in New Orleans and will be broadcast to the nation on ESPN. It’s an interesting tilt between a Big 12 team that’s on the rise and an SEC powerhouse which came up just short in its conference title game.

The general expectation entering the season was that this would be some kind of transition year for the Longhorns and new head coach Jimbo Fisher. The team put the kibosh on that talk pretty quickly. After a disappointing season-opening loss to the Maryland Terrapins, Texas ripped off six straight wins and emerged as one of the Big 12’s top teams. They made it to the conference title game, where they would come up short to the Oklahoma Sooners.

The Bulldogs entered the year with their sights set on a College Football Playoff berth, and the team came oh so close to making it. Georgia suffered just one loss in the regular season – 36-16 to #13 LSU – and their 7-1 conference record was good enough to take down the SEC East. That set up a showdown with the Alabama Crimson Tide for the conference crown, and the Bulldogs looked poised for an upset as they led after halftime. Alas, Alabama mounted a furious comeback to win, squashing Georgia’s CFP hopes in the process.

We really couldn’t ask for a better way to close out what has been a fun and entertaining bowl season. Let’s take a look at this fascinating contest in full detail, starting with the view from the oddsmakers.

Once the loss to Maryland was in the books, Texas responded with much more focused play the rest of the way. The team has a solid mark of 4-2 versus nationally-ranked squads, with one of the big highlights of the season being a stirring victory in the Red River Showdown. The Longhorns pulled out a last minute 48-45 victory over the Oklahoma Sooners in one of the more entertaining tilts of the entire year.

Georgia’s dominating run through the regular season includes seven games in which the team posted 40 points or more. They didn’t feast on cupcakes either, as the Bulldogs had an incredibly challenging conference schedule versus SEC foes. The fact that they have a mark of 7-1 in conference play tells you all you need to know about the overall strength of this squad.

The big win over Oklahoma in the regular season was dampened by the fact that the Longhorns came up short in the rematch for the Big 12 title, as they lost by a score of 39-27. That said, the fact that Texas made it that far in a season in which they weren’t expected to counts as a win. This is a talented team with firepower on both sides of the ball, and we can only expect them to improve moving forward.

Outside of closing the gap with their nemesis Alabama, there’s not all that much room for Georgia to grow. This is one of the best programs in the nation, hands down. The Bulldogs bring it on offense and shut opponents down on defense, which is a recipe for double-digit win seasons. The loss in the title game to the Crimson Tide was a real heartbreaker, so we’ll have to wait and see how the Bulldogs respond.

Georgia has the statistical edge on both offense and defense, but that doesn’t automatically equate to a blowout. Remember, this is a Texas team that overachieved, and we can only imagine that a 13-point spread puts a bit of a chip on their shoulders. The Bulldogs also get the nod on pass rush and QB protection, while other miscellaneous stats are a wash.

For recent bowl game history, Georgia gets the nod. The Bulldogs are 4-1 over their last five appearances, while the Longhorns are 3-2. Texas closed out 2017 on a high note, while Georgia would make it far as the national title game before coming up short versus Alabama in ann exceptional game.

The Longhorns faced off with the Missouri Tigers in last year’s Texas Bowl, scoring a 33-16 victory. The Bulldogs handled business versus Oklahoma in the Rose Bowl to the tune of 54-48 to advance to the title tilt versus Alabama. It was a close, back and forth affair which could have gone either way, but the Crimson Tide came out on top by a final score of 26-23.

Favorites are on a 3-0 run both straight up and against the spread in the Sugar Bowl. Last year, 3.5-point favorite Alabama took down the Clemson Tigers by a margin of 24-6. This year, Georgia is a 13-point favorite.

We’re expecting both squads to be properly motivated for this contest. Both sides came up short in their respective conference title games, so that should lead them to feel that they have something to prove. For Texas, it’s an opportunity to show the rest of the nation that they are ready to rejoin the college football elite. As for Georgia, they have a chance to make a statement after once again coming up just short against Alabama.

If that all comes to fruition, we are in line for a stellar game. Georgia is the more talented squad, and they should win outright as a result. However, Texas has shown a lot this year, and we’ll be looking for them to keep this one closer than many are expecting.

We’ll take Texas plus the points.