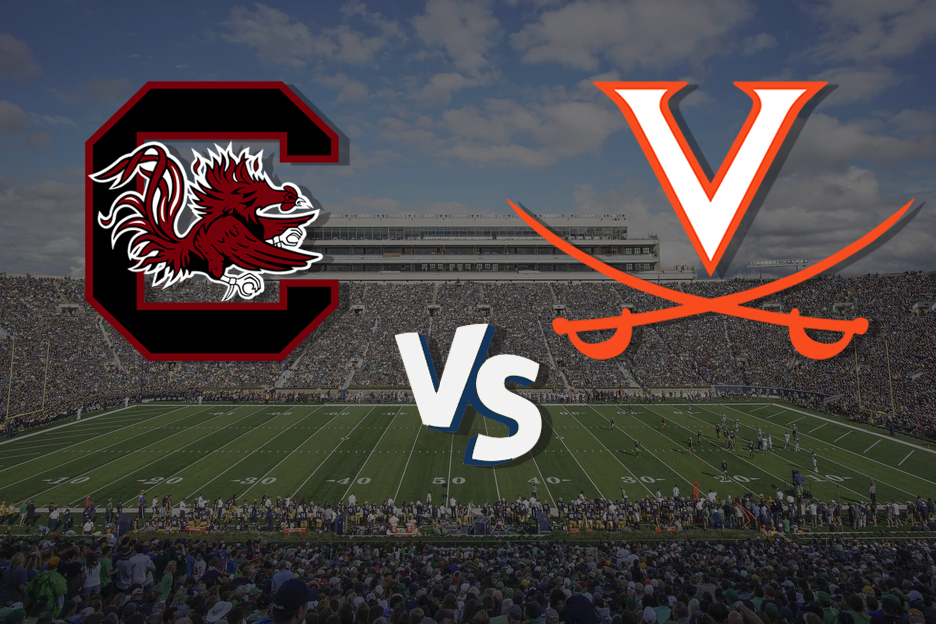 There is a slew of bowl games this weekend not to mention the national semifinals are being played Saturday. Jon Jones makes his return to the UFC. The final playoff spots in the AFC and NFC are still available in the NFL’s week 17.

We have a big weekend of sports ahead of us.

Since you likely won’t have the time to research all of this action, let’s start with a game a really like this weekend.

The University of Virginia Cavaliers will make the lengthier trip south to Charlotte to take on the Gamecocks of South Carolina who only have about an hour drive north from Columbia for their bowl date this Saturday afternoon.

Bank of America Stadium in sprawling Uptown Charlotte, North Carolina is home to the Carolina Panthers but this weekend play host for the 17th annual Belk Bowl.

The weather should be perfect with a forecast of sunny skies, still trees, and 50 degrees.

The University of Virginia football team ended the year on a disappointing note losing three out of four games including two 3-point losses to Georgia Tech and Virginia Tech, respectively.

Before that skid, the Hoos were 7-2 with only one conference loss and finished the year 3-4 against 2018 bowl teams.

While that does show the Cavs faced good competition this year, the Gamecocks are much more tested.

The betting line has moved significantly for this game. Let’s figure out why among other things and see if we should jump on the same musical wagon.

The outcome of this game is going to rely heavily on the Gamecocks ability to shut down the scrambling of UVA quarterback Bryce Perkins.

Maybe I should have ended with that, but I don’t think UVA is on the same level as South Carolina. I watched the Cavs play a couple games in person this year and I was not impressed.

I mentioned UVA did not end the year well dropping three of four. What about the South Carolina?

They played a solid year. It wasn’t a tale of two seasons like we see in college football quite often.

Georgia and Clemson were on the schedule. That’s a couple losses right there. They also lost at Kentucky, by 3 at home to Texas A&M, and a close one at The Swamp to the Gators.

So, they beat the teams they should’ve, lost respectively to the teams that are a little better, and were blown out facing top 5 competition.

If SC continues to ride this wave of normalcy, they should be too much for the Hoos in the Queen City.

Let’s get down to the numbers!

If you include the quarterback scrambles, UVA is a fairly decent running team averaging 4.3 yards per rush. Their passing attack, though, is 84th in the nation producing only 214 yards/game through the air.

The Hoos are efficient, though, completing 64% and averaging nearly 8 yards per attempt.

UVA gets the edge in turnover margin as well as average penalties per game.

Many of the stats between these teams are similar with SC throwing the ball more often than UVA.

It is highly important to note, though, that South Carolina wide receiver Deebo Samuel told his coaches, teammates, and fans quote “What bowl game?!” when questioned about his decision to skip the Belk Bowl to focus solely on preparation for the NFL Draft.

I don’t know if he said that, but his name is Deebo and he really should’ve.

It is a shame, though, that we have seen the last of Samuel in the college ranks. He had a stellar year for South Carolina and the Cocks will, no doubt, be a weaker team on Saturday without him.

Yes, the statistics are fairly similar and may even favor Virginia but their level of competition was clearly not the same. All five of South Carolina’s losses came against squads that are yet to play their bowl games.

The loss of Samuel will make a difference for the Gamecocks, potentially a 7 or more point difference but South Carolina has been able to keep opposing scramblers mostly under wraps.

The betting line started out at what you would think would be an inviting (-6.5) for the Gamecocks, yet the money has been pumping for the Cavs.

UVA’s strength on defense is in the secondary only giving up 179 pass yards/game and they will be keying in on the short and mid ranges with deep threat Deebo Samuel inactive.

Something will have to give, though, as the Gamecocks throw for 269/game good for 24th in the country.

It looks as if the Cavaliers may intercept a pass as SC ranks 100th in INT% and the UVA defense comes in at 10th in the same category.

The South Carolina defensive line will be very thin with injuries. Signs are pointing toward the Cavs with the points.

The most dominant group on the field Saturday will be the Gamecock offensive line. They have never been playing better and this offense put up 600 total yards and 29 first downs in only 25 minutes of possession time against the Clemson Tigers.

I think SC controls the clock in this game and the score is probably going to be within 7 points in the 4th quarter. The difference then will be SC kicker Parker White who ranked 2nd in the nation this year in FG%.

USC also shows up for bowls under head coach Will Muschamp. Last year they upset the Michigan Wolverines (-9) winning by a touchdown. They’ve won 5 out of 6 bowls beating Michigan again along with Miami, Wisconsin, and Nebraska.

UVA, on the other hand, has lost 4 of their last 5 bowls including a 42-point drubbing in the 2017 Armed Forces Bowl to the Navy Midshipmen. It should be noted that the betting line for the game was (+2.5) for the Cavs.

I have to take the Gamecocks to cover.

USC is missing their superstar game-breaking wide receiver/kick returner Deebo Samuel, so I would expect a few more field goal attempts as I think they will still be able to move the ball down the field.

The Gamecocks scored 31 and gave up 29 on average this year. Take away the Georgia and Clemson games and that defensive average improves a few points.

UVA scores 27 and gives up only 22. We have to remember their strength of schedule, though.

The weather will be perfect and UVA has a decent kicker while SC’s is highly efficient.

South Carolina QB Jake Bentley isn’t afraid to take chances and would really love to get to 30 touchdowns this year. He needs 3 more. I think he gets those and he adds in a sneak for a score and the Belk Bowl MVP trophy to carry with him back to Columbia for another season with the Gamecocks.

Set your DVR for the Clemson and Notre Dame game. Right after it will be Alabama and Oklahoma.

Oh, and UFC 232 is live from Las V, scratch that, Los Angeles, California.

Before all of that, though, you can’t forget about the Belk Bowl.

Just because my mom forgot about me when I was 3 years old inside of a Belk department store doesn’t mean you can ignore the stellar matchup of the South Carolina Gamecocks and the University of Virginia Wahoos.

UVA has been a solid defensive team all year, especially against the pass.

Throwing the ball is where SC has excelled but without speed demon Deebo Samuel, the Gamecocks may struggle to spread the field.

This game will be won in the trenches, though, with a massive SEC offensive line beating up on a much smaller UVA crew.

If SC needs some padding, their all-world kicker Parker White should put a few up and right through the posts to ensure the Gamecocks cover 5 points.