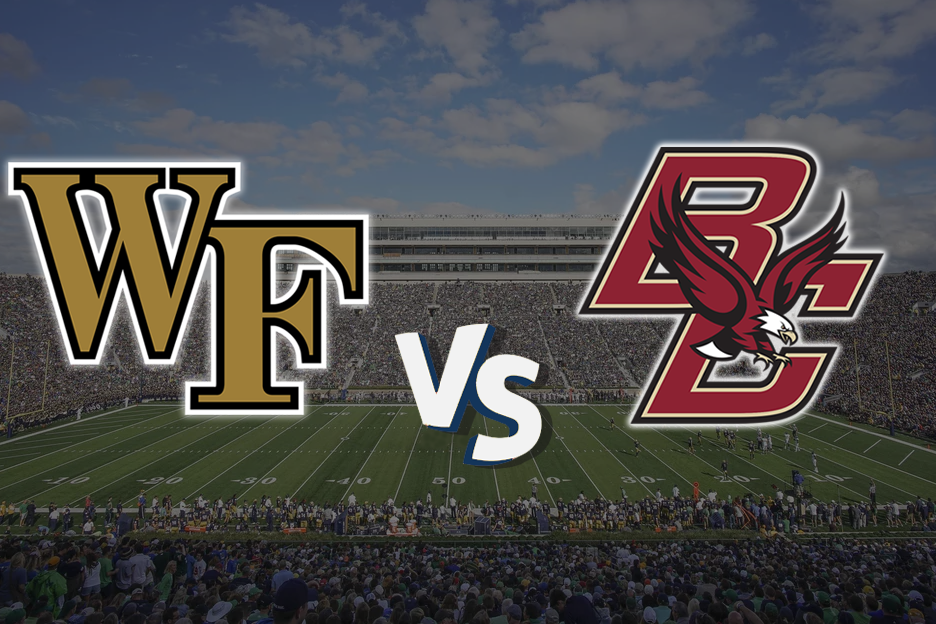 Hurricane Florence is already wreaking havoc on the Week 3 NCAA Football schedule. A number of games have already been cancelled due to what looks to be an incredibly powerful storm.

While Wake Forest is located pretty well inland in Winston-Salem, North Carolina, the school didn’t want to take any chances and adjusted the start time as a result. Originally scheduled for a 7:30 PM kickoff, this game has been moved up to 5:30 PM.

Shifting game times aside, it shapes up to be an entertaining affair between a pair of ACC rivals. Let’s take a look at the matchup in detail.

While both the Eagles and the Demon Deacons enter this tilt with perfect 2-0 records, expectations differ for both clubs. Oddsmakers have both squads relatively close in terms of projected win total – 7 for Boston College and 6.5 for Wake Forest – but there’s a much larger disparity on odds to take down the ACC crown.

Boston College currently has odds of 15/1 to achieve that goal, while Wake Forest checks in at 80/1. Both squads are well behind overwhelming favorite Clemson, which checks in at odds of -220 to win another conference title.

The Eagles have opened up the season with a pair of impressive wins. In the season opener, the squad took down the UMass Minutemen by a score of 55-21. The game was never in doubt, and two of UMass’ scores came in garbage time.
Sophomore QB Anthony Brown had himself a day by throwing for 279 yards and four scores. The Eagles defense was able to force three turnovers and sack opposing signal callers six times.

The following week, Boston College welcomed Holy Cross to town. The result was similar, as the Eagles walked out as victors by a score of 62-14.

This time around, sophomore RB Anthony Dillon was the big star on offense, as he ran for 149 yards and three scores. The defense wasn’t as aggressive in this rout, as the Eagles produced just two turnovers and a single sack.

The Demon Deacons had a tougher go of things in Week 1, as they hit the road to take on the Tulane Green Wave. They were able to secure a 23-17 victory in a hard fought affair.

Freshman signal caller Sam Hartman was the team’s leading passer and rusher, while wideouts Sage Surratt and Greg Dortch combined to haul in 23 balls for 299 yards. Defensively, Wake Forest forced a single turnover and got to the QB 3 times.

The school had an easier time the following week as it cruised to a 51-20 victory over Towson. Hartman had himself a game again, but he found some help in the backfield in the form of junior Cade Carney.

Carney had 19 carries for 130 yards and a score on the day. The Demon Deacons defense was able to make a lot more happen against weaker competition, producing 5 sacks and a lone interception for the game.

Over the past decade, these ACC rivals have been relatively evenly matched. Boston College is 6-4 straight up over that span and 5-5 ATS. Interestingly, the Under has been the correct choice in 8 of those affairs.

For the most recent 3 games, Wake Forest has a 2-1 advantage straight up, while the Under has come in for all three games. Last year’s matchup took place in early September as well, a 34-10 victory for Wake Forest in a game that was labeled as a pick’em with a total of 45.5 points.

Boston College is a pretty big road favorite this time around in a game with a much higher projected total. More points are in the forecast this year due to the talented offensive pieces that we touched on up above.

Dillon has been quite impressive in the Eagles backfield, running for 247 yards and 3 scores thus far. He’s added on 2 catches for 27 yards and a score for good measure.

As for Wake Forest, the story for the early part of the season has been the solid play of Hartman. He’s completed 48 of 78 for 620 yards, 4 TDs, and 3 picks. Hartman has also added on 128 yards and another score with his legs.

Unfortunately for Hartman, he’s likely to have a tougher go of things this time around due to the Eagles solid pass defense. The same goes for Dillon on the ground, as Wake Forest has been relatively solid against the run so far this year.

All told, the Eagles have produced 117 points on the year while giving up just 35. For Wake Forest, it’s 74 points for and 37 points against. Defensively, Boston College looks to have a clear edge, but that could be more of a product of level of competition to date.

Wake Forest has faced one relatively close team and one pushover so far, while Boston College has had an easy time in both of its games. This will be Boston College’s first road game of the season.

This is a relatively close matchup on paper between two conference rivals that could legitimately go either way. That said, one of these schools seems to have a little extra this year, and that can easily translate into an extra win or two as the season moves along.

That school would be Boston College, which looks to be the more complete team in the early part of 2018. Keep an eye on the schedule in case of any additional weather-related changes, but we’ll look for the Eagles to cover as they walk away with a key early-season road victory.