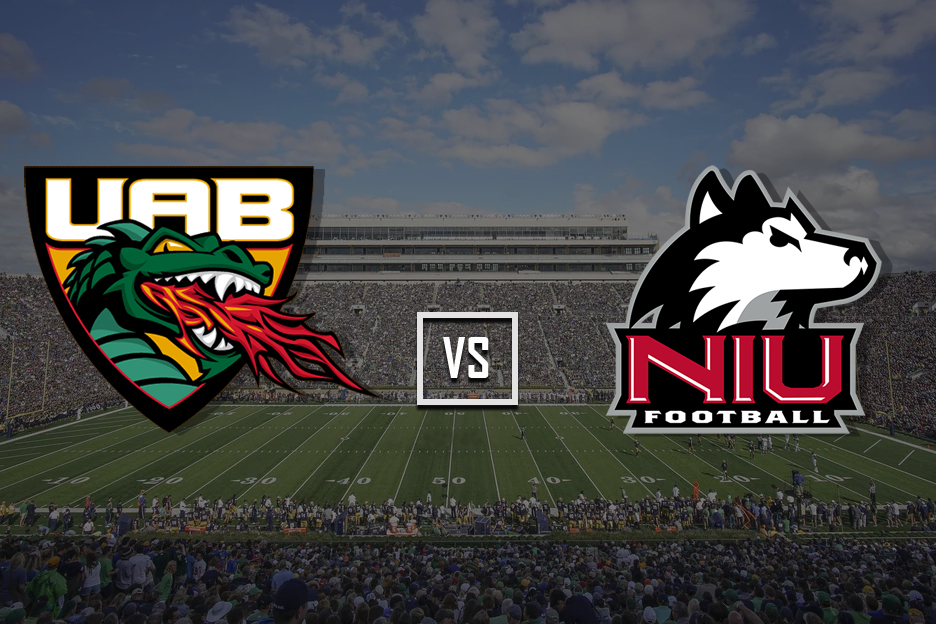 Bowl Week on ESPN kicks off on Tuesday night with a meeting of the 10-3 UAB Blazers and the 8-5 Northern Illinois Huskies in the Cheribundi Boca Raton Bowl. Both teams are champions of their respective conferences.

UAB defeated the Middle Tennessee Blue Raiders by a score of 27-25 to take down the Conference USA crown, its first ever. Notably, this title comes just one year after the school reinstated college football after a two-year break.

Northern Illinois won the MAC title with a thrilling 30-29 come-from-behind victory over the Buffalo Bulls. This is the fourth MAC championship for NIU, and it may very well be the sweetest of them all. The team was down by 20 points before mounting a ferocious comeback that proved to be too much for the Bulls to handle.

This shapes up to be an interesting matchup between two of the best mid-major programs in the nation. Let’s take a look at this game in full detail, starting with the way the oddsmakers see it.

After opening up the season with a mark of 1-1, UAB ripped off a nine-game winning streak in impressive fashion. Five of those wins were of the double-digit variety, including shutout victories over Rice and UTEP. The team leveled off and dropped two straight to close out the regular season, but they bounced back nicely for a big win in the Conference USA title game.

Northern Illinois started off the year 1-3, but the squad kicked it into overdrive for a six-game winning streak right after that. Five of the games were close over that span, but the team’s sixth straight victory was a big 38-15 victory over Toledo. NIU would also drop two in a row after its lengthy winning streak, but the team put it all together in the MAC Championship game win.

The season has not gone along as swimmingly for Navy. The squad won two of its first three – including a close 22-21 victory over Memphis – but the bottom quickly fell out from that point. The Midshipmen dropped seven in a row before winning another game.

The victory came at the expense of Tulsa two weeks back, a 37-29 victory for Navy. The team dropped a close 29-28 decision to Tulane last time out. Army already has a bowl game lined up for December 22, but this will mark Navy’s final contest of the year.

UAB gets the nod statistically on both offense and defense, but NIU isn’t terribly far behind. On the pressure front, these are two of the top teams in the nation for 2018. The Blazers do a much better job of providing protection for their own QB, while turnovers and penalties are essentially a wash.

As the tight 2.5-point spread indicates, the gap between these two teams is almost non-existent. They both bring hard-nosed defense to the table. While UAB is stronger on offense, that’s offset by the Huskies’ stout defense.

This will be the first meeting of these two schools, neither of which have exemplary bowl records. UAB has only gone bowling twice, both losses. Back in 2004, the team fell to Hawaii in the Hawaii Bowl by a score of 59-40. Last year, The Blazers faced off with Ohio in the Bahamas Bowl, and they had their doors blown off to the tune of 41-6.

Poor track record in bowl games aside, the fact that the team has made a bowl game for the second consecutive year is a remarkable turnaround for the program. UAB disbanded football in 2014 before reinstating it last year. There are plenty of programs in the nation which would trade places with where they are after just two short years back in action.

Northern Illinois has lost its last five bowl games. Notably, the team has been the underdog in each of them and failed to cover the spread. Last year, the team entered the Quick Lane Bowl versus Duke as 4-point underdogs and walked off the field on the losing end of a 36-14 decision.

For last year’s edition of the Boca Raton Bowl, 24-point favorite Florida Atlantic crushed Akron by a score of 50-3. All told, favorites are 3-1 both straight up and against the spread in this bowl game.

While this shapes up as an evenly matched contest, question marks abound as to the performance level of both teams based on recent bowl history. NIU has more of a history to dig into, but it hasn’t been pretty. The team has lost by at least a touchdown in each of its last five bowl games.

What’s more, the Huskies have lost by double digits in four of those five contests, and failed to cover in all of them. In two of the games, they were 10-points or more underdogs, so we can chalk that up to being outclassed. However, what do we make of the performance in the other three, all of which checked in with a spread of less than a touchdown?

While we can also pick nits with UAB having its doors blown off in last year’s Bahamas Bowl, that was more of an icing on the cake game for a program in its first year back. The Blazers are clearly on the right trajectory with another strong season under their belts, and we’ll look for them to be even more focused this time around as a result.

We’ll take UAB minus the points.