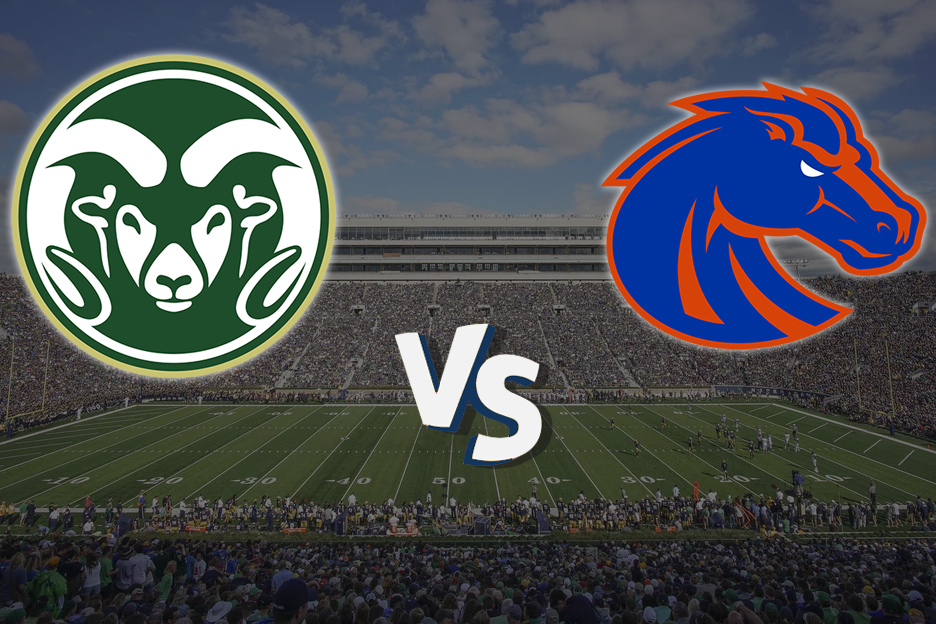 Another big weekend of College Football action gets kickstarted on Friday night with an intriguing matchup between a pair of Mountain West conference rivals. The 3-4 Colorado State Rams take a trip to take on the 4-2 Boise State Broncos for a 9 PM EST kickoff which will be broadcast nationwide on ESPN2.

After an uneven start to the season which saw their record dip to 1-4, the Rams enter this contest on a high note after winning two straight games. The offense came to life two weeks ago in a victory over San Jose State, while the defense was the star of the show in last week’s win over New Mexico.

As for the Broncos, the club has been swapping wins and losses since opening up the season 2-0. The squad didn’t have any answers for San Diego State’s defense while going down to defeat two weeks back, while the offense bounced back in a big way for last week’s win over Nevada.

Let’s take a look at what both teams bring to the table as we break down this Friday Night tilt.

Colorado State currently sits in third place in the Mountain division of the MWC with a conference record 0f 2-1. On the season, the Rams have been outscored by opponents by a margin of 246-172. Colorado State is averaging 24.6 points per contest, while the defense has been allowing an average of 35.1 points per game.

Last week was a high mark for the defense, as they held New Mexico to just 18 points. The offense delivered its biggest output of the season the week prior to that when it dropped 42 points on San Jose State. On the whole, the offense has been leaning more towards the pass, as the team is averaging 298.1 yards per game through the air and 113.4 yards per contest on the ground.

Colorado State Defense
It has been scorched in both facets at various times. For the year, the Rams are allowing an average of 242.1 passing and 204.1 rushing yards per contest. The unit has generated 11 sacks and nine turnovers thus far, as well as one defensive touchdown this season.

Senior QB K.J. Carta Samuels and junior wideout Preston Williams have been the biggest standouts for the Rams this season. Samuels is completing 61 percent of his passes for 1,934 yards, 16 scores, and six picks, and he also has a rushing TD for good measure. Williams has already hauled in 52 balls for 671 yards and seven scores.

Boise State enters this contest in second place in the Mountain division with a conference mark of 2-1. Last week’s bounce-back win over Nevada had a final score of 31-27, while the prior week’s debacle against San Diego State would see the Broncos fall by a score of 19-13. The Broncos had entered that contest with a mark of 3-1, with their lone blemish to that point coming from a loss against Oklahoma State.

On the season, the team is outscoring opponents by a margin of 217-131, or an average of 36.2 points per game for versus an average of 21.8 points against. The Broncos have a nice balance between the passing and running game, with averages of 320.7 yards per game through the air and 160.7 on the ground.

Senior QB Brett Rypien and junior RB Alexander Mattison have been the biggest contributors on offense for Boise State. Rypien is completing a solid 67.4 percent of his passes for 1,858 yards, 14 scores, and five picks. Mattison has toted the rock 108 times for 416 yards and six scores, and he has hauled in 11 passes for another 62 yards for good measure.

These two schools have hooked up in each of the past seven years. Boise State is a perfect 7-0 straight up over that span and 5-2 against the spread. The Over has been the correct choice in five of those contests, but just once in the past three games. Boise State has been a double-digit favorite on four separate occasions, covering twice.

Last year, Boise State was victorious in a wild one by a score of 59-52. The projected total for that game was just 59 points, while the Broncos were favored by 6.5 points. It’s unclear if we’ll see as many fireworks in this year’s meeting of the two squads, but the Over/Under has inched up to 62 points. The projected total has checked in at 59 points or greater in four of the last five meetings, with the Over coming in three times in total over that span.

As for the game itself, Boise State is just a better club. Outside of the hiccup against San Diego State, the squad has been playing up to its capabilities. It’s only other loss was to Oklahoma State, which was the #24 team in the nation when the two schools hooked up.

The Rams have been playing much better of late, but there are several disappointing losses on the 2018 resume already. The team started in a 0-2 hole after dropping back-to-back games to Hawaii and Colorado, both of whom dropped 40+ points on them. Colorado State has shown improvement since then, and two straight wins is definitely something to build on.

However, we don’t see how they can stroll into Albertsons Stadium and make it three in a row. We’re looking for Boise State to win outright, and we’ll also take them to cover the hefty spread.