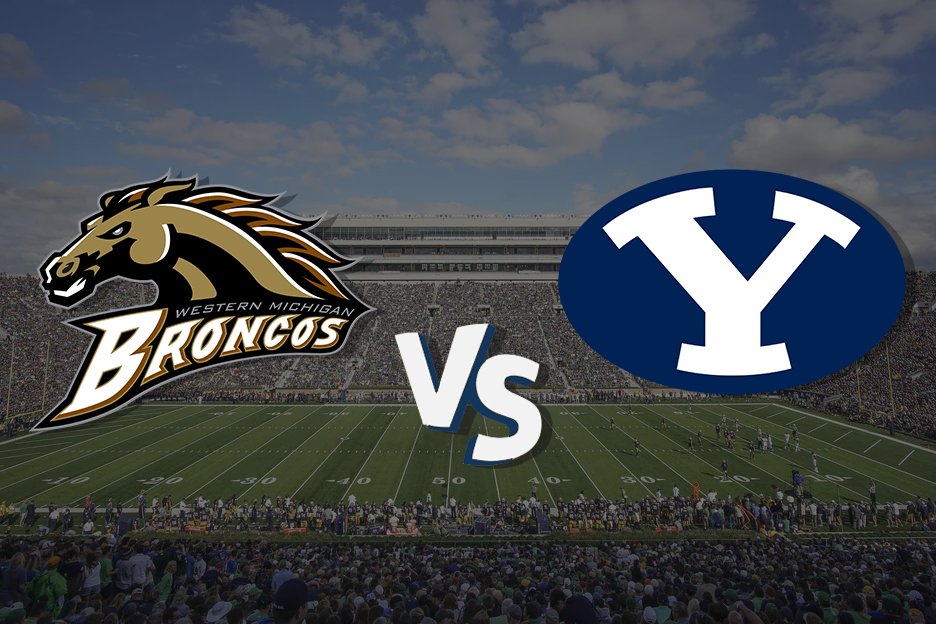 Bowl Week continues on Friday afternoon with a pair of interesting tilts. The more intriguing of the pair looks to be the Famous Idaho Potato Bowl, which kicks off at 4 PM EST from Albertsons Stadium in Boise, ID. The 7-5 Western Michigan Broncos will be facing off with the 6-6 BYU Cougars, with the former representing the MAC Conference and the latter one of the few remaining independent programs at the FBS level.

While the records of the two squads leave a lot to be desired, that doesn’t mean they can’t combine for an entertaining game. In fact, we have a meeting of two contrasting styles. The Broncos skew towards offense, while the Cougars have some chops on defense. So which side will prevail in this Friday afternoon contest? Let’s dig into the numbers and break down this matchup in full detail, starting with the game line.

Western Michigan opened up the season with back-to-back losses, but the team was punching out of its weight class in non-conference play. The Broncos fell to Syracuse in the opener by a score of 55-42, and they followed that up with a 49-3 thrashing at the hands of Michigan. The squad turned things around nicely from that point and ripped off a six-game winning streak.

The season started off differently for BYU, as the team marched to a mark of 3-1, a span that included wins over Arizona and Wisconsin. The bottom fell out quickly, as the Cougars were dominated by Washington by a score of 35-7, and would ultimately go on to lose four of their next five contests. Struggles at the QB position were part of the problem, and the team would eventually pass the reins from Tanner Mangum to Zach Wilson.

Following the six-game win streak, the Broncos fell on hard times and lost its next three games to conference opponents when QB Joe Wassink went down with injury and was replaced by Kaleb Eleby. That swoon was particularly costly, as they ultimately finished up just one game behind NIU in the MAC West, a squad they actually defeated in the final week of the regular season. Another win in conference play, and the Broncos could’ve made it to the conference title tilt.

After the team’s rough patch in the middle of the year, the Cougars pulled it together enough to close out the season and win two of its final three, securing bowl eligibility along the way. While the 6-6 record is certainly on the disappointing side of the ledger, the Cougars were only blown out twice. Once was in the aforementioned game versus Washington, with the the other coming in a 45-20 loss to Utah State. The team’s four other losses were all by by eight points or less.

This one is pretty simple: Western Michigan has the clear edge on offense, while BYU is tougher on defense. The Broncos have the advantage on pressure for and against, while turnovers and penalties are a wash.

It all comes down to whether or not BYU can slow down the Broncos offense while making enough happen on offense. It’s the opposite for the Broncos: can the offense break through a tough defense? Can the team’s own defensive unit step its game up in comparison to its performance on the year?

This will be the first-ever meeting of these two schools, so we’ll have to rely on recent bowl history for some additional nuggets of information. BYU missed out on bowl eligibility last year, but we can look back to the previous five years and find that the team went 2-3 over that span. Back in 2016, the Cougars were invited to the Poinsettia Bowl to take on Wyoming, and they walked off the field with a 24-21 victory.

Western Michigan also missed out on a bowl last year, but the team qualified in each of the previous three years, winning one and losing twice. Following the 2016 season, the Broncos faced off with Wisconsin in the Cotton Bowl and went down to defeat by a score of 24-16.

Recent Famous Idaho Potato Bowl trends favor the underdog. Over the past five years, the underdog has won outright and covered four times. Last year, 2.5-point favorite Wyoming won and covered over Central Michigan 37-14. Also over that span, the Over has been the correct call four times, including the last two years.

For this year’s edition, BYU is installed as a big 12-point favorite in a game with a projected total of 49.5 points as of this writing.

Despite the down year for the program, BYU is a better team on paper than Western Michigan. However, the disparity is just not that dramatic this year. Western Michigan was rolling along nicely when the team’s starting signal caller went down. Few programs can handle such a body blow without missing a beat.

BYU had its own struggles at QB this year, but we can’t pinpoint their struggles down to that and that alone. The 2018 regular season was simply a forgettable one, but the team did seem to improve as it wound down. We can see them doing enough to pull out a win, but a 12-point spread seems a bit on the ambitious side.

We’ll take Western Michigan plus the points in a closer-than-expected game.