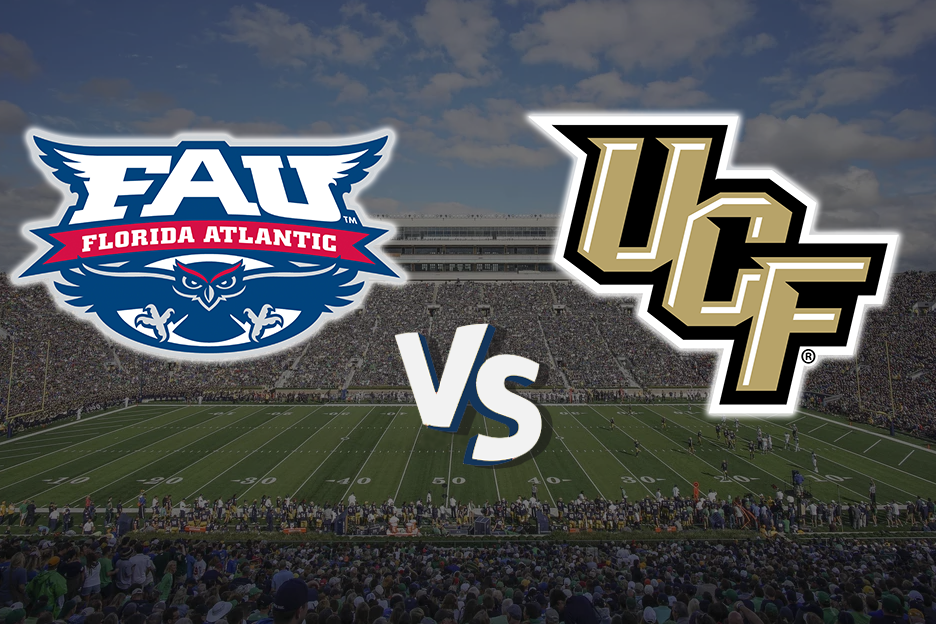 Before the main course of Week 4 is served on Saturday, appetizers come fast and furious with a trio of games played under the lights on Friday night. The most appealing of those three is a meeting between a pair of intrastate rivals that kicks off at 7 PM EST on ESPN.

The Florida Atlantic Owls will be looking to keep pace with the #16 UCF Knights in a game that projects to be a high-scoring affair. Before breaking down what could be a highly entertaining game, let’s take a look at the lines to see what the oddsmakers have to say.

Florida Atlantic enters this game with a mark of 2-1, which is good enough for third place in the Conference USA East division. The club opened the season against Oklahoma and got smoked by a score of 63-14, but the Owls have followed that up with back-to-back wins over Air Force and Bethune-Cookman.

For the latter matchup, let’s just say it wasn’t much of a contest, as FAU held a 29-0 lead after the first quarter. Junior RB Devin Singletary took advantage of the opportunity to pad his stats, rushing for 84 yards and five TDs on the day. Yes, five.

Singletary has been a stud out of the backfield – 210 rushing yards and seven TDs – while freshman Chris Robison has been productive behind center. Robison has thrown for 799 yards, four touchdowns and two picks so far, but the majority of his production came in the game against Air Force.

Junior Jovon Durante has been the most productive of the pass catchers so far, hauling in 23 balls for 298 yards and two scores to date. Defensively, the Owls have generated just four sacks and three turnovers so far in 2018.

UCF rolled to a pair of convincing wins to open the season 2-0, and they are currently in first place in the American Athletic East division. The Knights received an unplanned bye week due to Hurricane Florence in Week 3, as its game against North Carolina was cancelled, giving the club extra time to prepare for this week’s game.

Back in Week 1, the Knights cruised passed UConn by a score of 56-17, and they followed that up with a dominating 38-0 victory over South Carolina State in Week 2. The offense has been cruising along with junior QB McKenzie Milton leading the way.

Milton has completed 45 of 71 for 589 yards, six scores, and three picks so far this season. A committee approach has taken hold in the backfield for now, as the Knights boast three 100-yard rushers at this early juncture. Tre Nixon and Gabriel Davis are tied for the team lead in receiving touchdowns with two apiece.

The Knights are generating 609 yards of total offense and 47 points per game so far, but it’s important to remember that the school has not hit the tough part of its schedule yet. UCF is giving up an average of 372 yards and 8.5 points per game, while the defense has generated four sacks and six turnovers thus far.

Expectations for both schools are relatively in line, as oddsmakers currently have FAU pegged for 8.5 wins, while UCF has a current benchmark of 9 wins. However, odds for a national tite place the talent gap in perspective.

While actually sealing the deal would be a miracle for either school, UCF has odds of 50/1 to make it happen, while FAU sits at 500/1. Both clubs are the favorites in their respective conferences, with UCF at even money to win the AAC, and FAU at -120 to take down Conference USA.

Despite not being that far apart geographically – FAU is located in Boca Raton while UCF is located in Orlando – these schools don’t have much in the way of recent history. You have to go all the way back to 2003 to find the last meeting between these two squads, a 33-29 victory for UCF.

Looking ahead to next week, UCF closes out the month of September with a visit from the Pittsburgh Panthers. For FAU, it’s a road trip to face the Middle Tennessee Raiders on the docket for a 7 PM EST kickoff next Saturday.

As evidenced by the projected total of 76.5 points, the forecast calls for points on Friday night at Spectrum Stadium in Orlando. While the spread doesn’t point to a ‘whoever has the ball lasts wins’ type of game, both clubs have enough firepower to keep this one interesting past halftime.

Quite simply
It comes down to efficiencies on offense and which defense can at least slightly slow down the other. Both schools can put up plenty of points as needed, but neither school has impressed on defense so far. As such, a turnover or two can easily make all of the difference.

UCF enters the game with the nation’s longest winning streak, which currently stands at 15 games. It’s pretty tough to see the streak coming to an end at home in a nationally televised game against a school it’s better than on paper.

FAU can certainly make it interesting, and we expect head coach Lane Kiffin to have his players properly motivated to do just that. In the end, the #16 school in the nation should be able to put enough distance between itself and the Owls to win outright and cover.