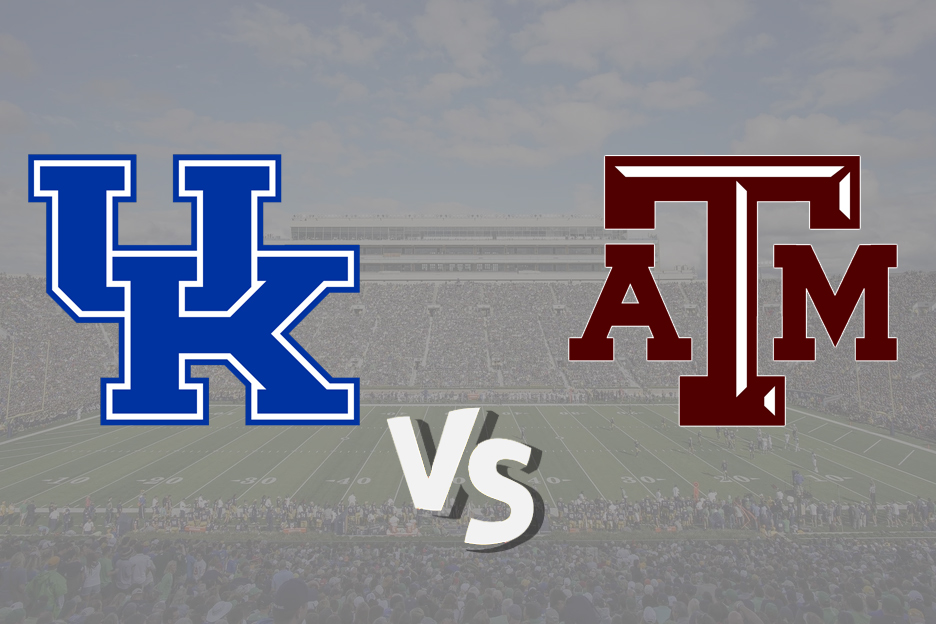 The Kentucky Wildcats have been one of the biggest surprises of the early part of the regular season. A perfect mark of 5-0 has been good enough for them to reach the #13 spot in the AP poll, and one of the rewards of that lofty ranking is a primetime game on ESPN.

The Wildcats will take on the Texas A&M Aggies, a team which has also sniffed the Top 25 this season. While a victory over its undefeated SEC rival won’t necessarily vault them back into the Top 25 conversation, it would certainly be another big stepping stone on the club’s path back to being a contender.

Let’s take a look at one of the more intriguing matchups of Week 6’s evening slate of games.

The big wins just keep coming for Kentucky. After a season-opening 35-20 victory over Central Michigan, the Wildcats smacked a major monkey off of its back with a massive victory in Week 2. Kentucky took down the rival Florida Gators by a score of 27-16, snapping a 31-game losing streak to the school in the process.

Victories over Murray State, Mississippi State, and South Carolina followed. Kentucky is creeping up the polls with its impressive start to the season, currently sitting at #13 according to the AP.

The passing attack hasn’t been terribly impressive for Kentucky. Senior Terry Wilson has taken the majority of snaps, but he’s thrown for just 585 yards, two touchdowns, and five picks. Wilson has produced on the ground as well, producing a line of 52/300/3.

The Wildcats are finding plenty of success out of the backfield. Junior RB Benny Snell Jr. has toted the rock 115 times for 639 yards, a solid 5.6 yards per carry. Snell Jr. has found the end zone eight times, and he’s thrown another 43-yard score for good measure.

Sophomore RB Asim Rose has also been a factor, with 231 yards and four scores. There have been no standouts among the wideouts, but sophomore Lynn Bowden Jr. has emerged as the top option with 24 catches for 218 yards and a score.

Defensively, Kentucky is holding opponents to an average of 177.4 passing yards, 110.4 rushing yards, and 12.6 points per game. The unit has produced 12 sacks and eight turnovers through five games. Senior LB Josh Allen has been a major standout with six of those sacks, and his draft profile is on the rise.

The Aggies enter the game with a mark of 3-2, but those two losses came to two of the top programs in the nation. Texas A&M fell to Clemson by a score of 28-26 in Week 2, and lost 45-23 to the Alabama Crimson Tide in Week 4.

The team’s first two victories of the season were of the blowout variety over Northwestern State and ULM. Last week’s victory over the Arkansas Razorbacks was a much tighter contest with a final score of 24-17. Junior RB Trayveon Williams led the way with 29 carries for 152 yards and two scores.

On the season, Williams has been firmly in control of the backfield, producing a total line of 96/582/6.

Sophomore QB Kellen Mond has had the keys to the offense, and he has been producing through the air and on the ground.

Mond has completed 60.1 percent of his passes for 1,221 yards, seven scores, and four picks. On the ground, Mond has rushed 54 times for 215 yards and four TDs. There has been a pretty even distribution among the team’s top pass catchers, but junior TE Jace Sternberger has emerged as a go to threat with a line of 17/256/4.

Kentucky has next week off before closing out the month with games against the Vanderbilt Commodores and the Missouri Tigers. Next up for Texas A&M is a game against the South Carolina Gamecocks, followed by a bye week.

There’s no history to speak of between these two schools, so we have to focus on what’s at stake for both sides to look for clues on how the game may play out. For Kentucky, the squad is striving for a mark of 6-0, a record the school hasn’t reached since 1950. That would be an absolutely huge achievement for the Wildcats, to say the least.

For A&M, head coach Jimbo Fisher has the Aggies on the right track. The team put a big scare into Clemson, and they didn’t get completely obliterated by Alabama. That said, he’s still looking for a signature win in 2018, and he has another opportunity at hand with the #13 team in the nation coming to Kyle Field on Saturday Night.

This game shapes up to be a close one, but we have to give A&M a slight edge due to the home field advantage. When you add in the fact that the Aggies strength against the run poses a daunting challenge for a squad that leans heavily on the rushing game, and we can easily make a case for A&M to win outright.

That said, the Wildcats have been on a magical run so far. We can’t completely rule out that they may have another rabbit left to pull out of their hat. We’ll look for the Aggies to win a close one, but the Wildcats are talented enough to cover the spread.

Our choice is the Kentucky Wildcats plus the points for what looks to be an entertaining matchup.