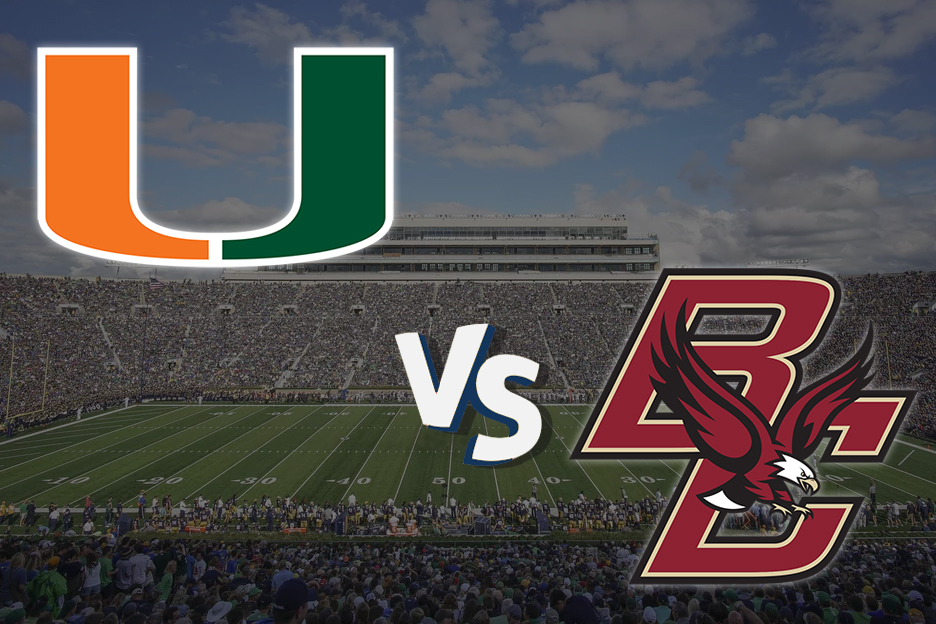 Week 9 of the College Football regular season kicked off early with a game on Tuesday night, and the action keeps on rolling with a number of tilts on both Thursday and Friday before the main course of games on Saturday. On Friday night, the best game of the bunch looks to be a meeting of a pair of ACC rivals, both of whom enter the game with a mark of 5-2.

The Miami Hurricanes and Boston College Eagles are both third in their respective divisions, and each team has also had a stint in the AP Top 25 poll this season. While Clemson remains the clear class of the conference, Miami and Boston College are among a handful of teams who are jockeying for position behind them.

As such, this game has huge ramifications for the rest of the way. The Hurricanes are currently third in the ACC Coastal division behind Virginia and Virginia Tech, while the Eagles are tied for second behind Clemson in the ACC Atlantic with NC State.

Let’s take a look at what looks to be an intriguing nationally televised matchup underneath the Friday Night lights in full detail.

Miami entered the season ranked #8 in the country, but they were promptly slapped around by #25 LSU in the opener, falling by a score of 33-17. The team ripped off five straight wins from that point, including Week 2 when they took out their frustrations on Savannah State to the tune of 77-0. The Hurricanes fell to Virginia on October 13 for their second loss of the season by a score of 16-13.

Fresh off their bye week, the school will be looking to get back on track as it heads up north to take on Boston College. On the season, Miami is averaging 37.4 points per game while giving up just 18.1. The squad has a pretty balanced approach on offense, while its defense is first in the nation in terms of fewest yards allowed. The unit is also generating solid pressure, with 25 sacks, 17 turnovers, and two defensive touchdowns on the year.

Senior Malik Rosier and freshman N’Kosi Perry have both seen time behind center this season, with Rosier handling the bulk of the work in the team’s last outing. The pair has combined for 16 TDs and eight picks thus far. Junior Travis Homer leads the way in the backfield – 92/529/1 – while sophomore Jeff Thomas has emerged as the top pass-catching option with a line of 17/401/3.

Boston College opened up the season with three straight wins before going down to defeat at the hands of Purdue. The team has sandwiched a pair of wins around a loss to NC State since that point. The school’s last outing was also on October 13, a 38-20 victory over Louisville.

For the season, the Eagles are scoring an average of 39.6 points per game while allowing 26. The team has found some success through the air, but it’s clearly a run-heavy attack, as evidenced by the team’s average of 226.9 rushing yards per contest. The defense has been challenged in both facets at times, but the unit is generating nice pressure with identical numbers to the Hurricanes – 25 sacks, 17 turnovers, and a pair of defensive scores.

Sophomore QB Anthony Brown has been pretty solid while completing 58.7 percent of his passes for 1,238 yards, 14 scores, and four picks. Explosive sophomore RB AJ Dillon has been stellar out of the backfield, producing a line of 106/652/6. To make those stats all the more impressive, Dillon has missed the last two games to injury, but it looks like he’ll be good to go on Friday night. Sophomore Kobay White leads all pass catchers with a line of 16/281/3.

Looking ahead, Miami’s November schedule includes home games against Duke and Pitt, with road games versus Georgia Tech and Virginia Tech in between. Boston College has a brutal two-game stretch up next – at Virginia Tech and home against Clemson – before closing out the season with a road game versus Florida State and a home tilt against Syracuse.

All-time, Miami holds a dominant edge in this series with a mark of 24-5. That carries over into the past 10 meetings with Miami having a record of 8-2 over that span, but Boston College has closed the gap over the last three contests. The Eagles have actually won two of the last three meetings, one as a home favorite and the other as a road underdog.

These two schools last hooked up back in 2012, a 41-32 victory for Miami in which the Hurricanes were two-point favorites. The Over has come out just twice in the last ten meetings of these two squads, with the Under being the right call for four of the last five.

Both teams come into this contest well-rested after Week 8 byes. That’s especially good news for Boston College, as Dillon had some extra time to heal up from his ankle injury. The Eagles are simply a different squad with him in the fold, and they’re definitely going to need all hands on deck against one of the top defenses in the nation. Miami ranks 12th against the run, but some teams have managed to find some success, including Virginia in their victory over the Hurricanes the last time out.

The return of Dillon plus the home field edge is enough for us to come down on the side of the Eagles as winners of this contest. The fact that they are 3.5-point home underdogs just makes the selection all the sweeter in our eyes.

We’ll take Boston College plus the points in what should be an entertaining affair.