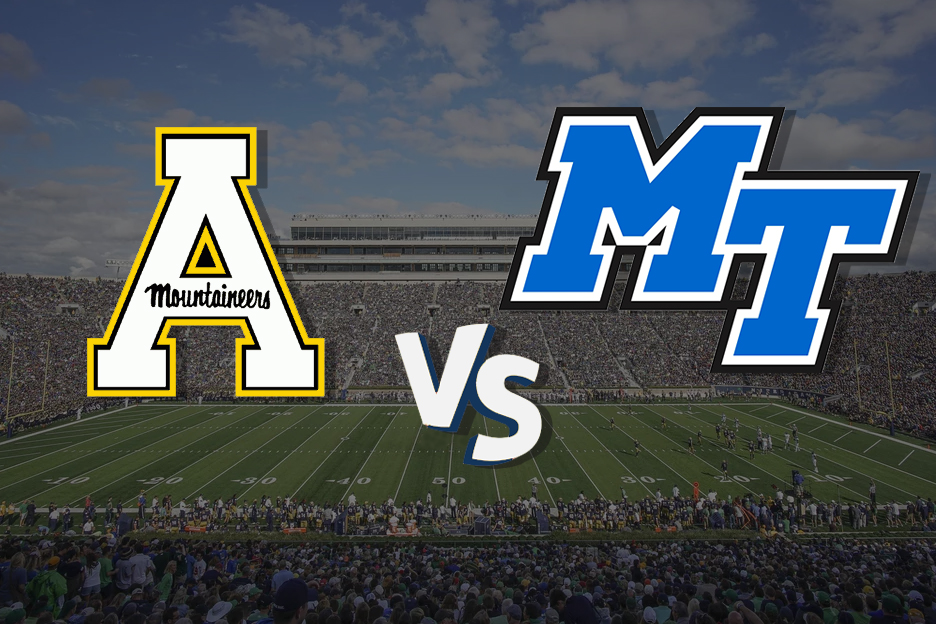 This Saturday night at 9:00 PM Eastern, the R&L Carriers New Orleans Bowl kicks off from the Mercedez-Benz Superdome down on the bayou.

I am personally looking forward to the New Orleans Bowl more than any other on the schedule.

You don’t believe me?

I was accepted to grad school at App State as I wanted to follow my favorite biochemistry professor, but alas, I moved to Las Vegas instead and here I am.

Boone, North Carolina, the home of the Mountaineers is located in a gorgeous part of the country nestled in the Great Smoky Mountains.

If you aren’t from Appalachia or the south and are wondering why the name of this school sounds so familiar to you, remember the first game of the season in 2007.

Appalachian State not only blocked one but 2 field goals in the final 1:45 of the ball game not to mention they drove the length of the field in 1:30 and kicked the game-winner to beat the Michigan Wolverines at the Bighouse!

The Mountaineers have been members of the Sun Belt Conference since 2013. They won the conference in 2016 and 2017 and were divisional winners this year.

Head Coach Scott Satterfield has done a great job in Boone since taking over for 20+ year head coach Jerry Moore who brought Mountaineer fans 14 conference championships in his 24 years under the headset at App State.

I think he’s got his boys ready to play this weekend.

What about the other side of the ball?

I sincerely apologize if you’re a Middle Tennessee State fan or you clicked on this article because you were dying to hear about Blue Raiders and their chances this weekend down in the Big Easy!

Here’s a quick look at the arrival of Middle Tennessee State Blue Raiders down in Nawlins’ for their bowl week.

Day 1 is in the books, we’ve made it safely to #NewOrleans and excited to get the 2018 @NewOrleansBowl experience started! #trueblue #blueraiders pic.twitter.com/pvukH3cwCu

I would say both teams look as ready as they can be for a big game in an even bigger stadium this Saturday night.

Let’s go ahead and examine the moneyline, point spread, and the over/under for this week’s New Orleans Bowl.

Everybody likes a good underdog!

That doesn’t necessarily mean the underdog is going to win and make everyone happy. More often than not, the underdog loses.

On paper, the Mountaineers are a better team. Bowl season can be as wild as March Madness sometimes, so I can’t throw a beignet crown on App State just yet.

I mentioned the Michigan upset of 2007 but it was September 1st of this year when we almost witnessed another massive upset over a Big Ten team. This time, the game was in Penn Station and the App State Mountaineers came back from two touchdowns in the 4th quarter only to lose in the first overtime period.

We can’t exactly call that loss a hiccup for the boys from Boone. They only have one more loss and it was in the middle of the season opposite Georgia Southern on the road 34-14.

In seven out of App State’s 10 wins, they have held opponents to 10 points or less and the other three opposing squads didn’t make it past 20.

They have been a very dominant ballclub.

How about Mid Tenn State?

They played Georgia, Vanderbilt, and Kentucky this year so it’s not like App State will be the best team they’ve faced this season.

A 3-4 road record isn’t a good sign heading into a bowl game for any team but 3 of those losses were opposite the aforementioned SEC squads.

Those stats especially don’t add up to App State’s average of 6.0 yards per play on offense and only 4.2 given up per defensive snap.

That’s nearly a 2-yard difference on each play.

If that’s not enough for at least a moneyline bet, I don’t know what is.

Well, Appalachian State runs the ball 62% of the time. If they can have success on the ground early, I definitely think we can get to 48 points.

The adjusted score looks like it will be about 30-20 so the over bet is looking a little better.

Let’s first see if and how the Blue Raiders can slow down the dominant rushing attack of the Mountaineers.

App State averaged 5.2 yards/rush this year while MTSU gave up 4.3 on the ground. Adjust that and we are upwards of 5 yards/carry which in all likelihood will prove defeat for the Blue Raiders.

How is this going to affect the point total, though, you ask?

If they establish the run early on, they will be able to pass the ball with a much higher efficiency potentially using the play action pass to set up the deep ball. This should also give App State an early lead and if they can take said lead into the second half of play, the Blue Raiders will be frantically throwing the ball towards their opponent’s end zone.

With a season-long 69% completion percentage and a 7.0 yard per pass attempt average, the Blue Raiders have clearly made their living through the air in 2018.

They will likely be in passing situations more often than not in this one as App State is only allowing opponent’s 5.2 yards/pass while averaging 7.5 themselves.

With an 88% red zone scoring percentage, I think the Blue Raiders will get a score or two late in the game that won’t affect the outcome but will bank that over 47.5 points wager for you!

So, if we are going over 47.5 points total, what do you think the final score will be?

I think it’s going to be about 31-27. As good as App State defense is, MTSU has such a strong passing attack that should keep them in it at least until the 4th quarter.

If MTSU were mostly a running team, I would definitely take the Mountaineers to cover 6.5 but they aren’t.

In fact, their quarterback Brent Stockstill is 24-years-old and the coach’s son. Father Rick Stockstill was a QB himself under Bobby Bowden at Florida State and has been the head coach of Middle Tennessee since 2005.

Brent was on the preseason watch list for the Davey O’Brien and Maxwell Awards. At only 6’0 tall and around 200 pounds, he isn’t a major pro prospect at this time but has had a tremendous college football career.

He is the NCAA’s active leader in touchdown passes as well as 2nd in yards and 2nd in total offense. That boy, or should I say, man, is good.

I think App State will keep about a 10-point lead into the 4th when Stockstill makes it fairly interesting towards the end bringing it to a one-score ballgame but that’s as close as it gets.

The Mountaineers put together a long 4th quarter drive running out the clock averaging 5+ yards/carry.

The Big Easy hosts a couple teams from bordering states, North Carolina and Tennessee, for the 2018 New Orleans Bowl set to kick off this Saturday night on ESPN.

Middle Tennessee State is primarily a passing team with one of the most efficient gunslingers in college football, Brent Stockstill.

The Mountaineers are a run first team for sure running the ball on 62% of all their plays from scrimmage in 2018.

Keeping Stockstill off the field and, of course, protecting the pigskin will be the keys to victory for App State.

With such a powerful running attack, I think they can do it.

I love the moneyline bet on App State and I kind of like the over 47.5 points wager.

6.5 points is a lot for the NCAA’s active leader in touchdown passes, though.

So, I like the Stockstill-led Blue Raiders to make it close in the end.