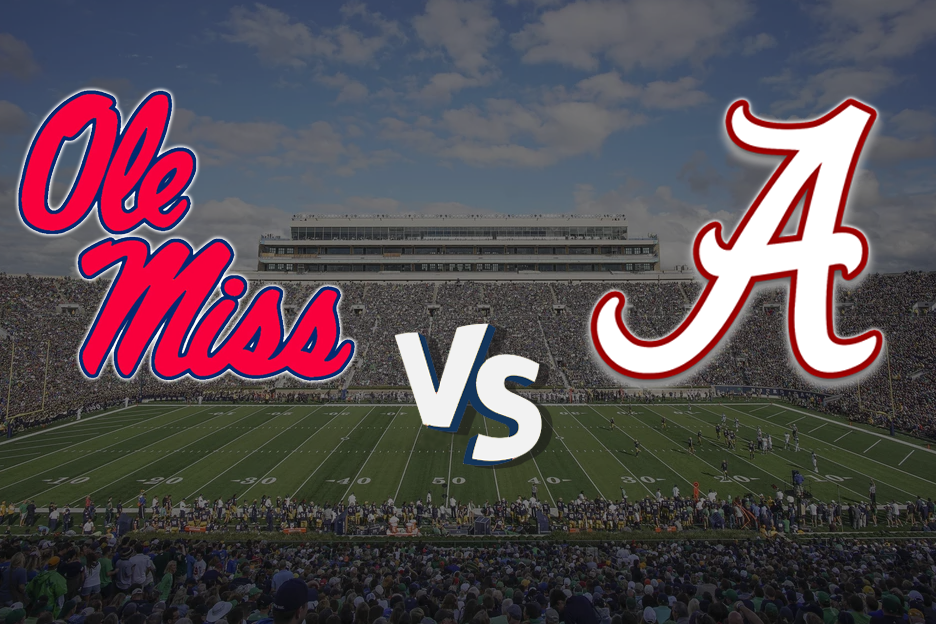 It seems like it’s been ages since Ole Miss pulled off a pair of thrilling victories against Alabama. But those wins in consecutive seasons came just four and three years ago.

Since then, Ole Miss has seen their coach Hugh Freeze resign after calls to escort services were unearthed. There were several recruiting violations made even before that, from paying players to rigging recruits’ ACT scores. On top of that, their QB of the future and other key players transferred.

As for Alabama? Well, they’re still just being Alabama, dominant as ever.

But despite Alabama being 22-point favorites, and even after throttling the Rebels 66-3 last season, some little bit of magic remains from those upsets. Some quality that at least calls for the unpredictable, if nothing else.

So at 7:00 EST on ESPN, under the lights of Vaught-Hemingway Stadium in Oxford, Mississippi, expect something wild. Will it be competitive? That’s the real question.

How They Match Up

Ole Miss is looking to answer for the pummeling it took last year at the hands of the Tide. Through two weeks of the season, they’ve shown an incredible balance on offense.

But that was against Texas Tech’s swiss cheese of a defense and FCS team Southern Illinois. They’re about to get a major upgrade in competition.

Alabama is still disrupting on all three levels of their defense. Their five sacks through the first two games isn’t that impressive, but they’ve produced a lot more pressure than that. They also only have three turnovers gained, an average (1.5) that will undoubtedly be pumped up by the end of the year.

Even without several of their top defenders of 2017, Alabama is filled with players who can disrupt in the backfield and throw offenses off rhythm. Dylan Moses, the former top-linebacker recruit who was nagged by injuries last year, is helping lead a strong linebacking unit.

This was a position that was constantly switching guys in and out because of injuries last year and therefore has a lot of experience. Senior Mack Wilson is another ultra-talented LB who is bound to put his stamp on this game.

The Ole Miss has been taking advantage of weak front-seven play through the first two weeks.

Jordan Ta’amu has picked apart defenses in an air raid that fits him just as well if not better than it did Shea Patterson. His 7-0 TD-to-INT ratio is about as good as it gets through two games.

And Scottie Phillips’s 311 yards through two games has balanced the offense out considerably compared to recent years. But the holes he’s found so far have a way of shrinking considerably against a defense like Bama’s.

His field vision and instincts will be put to the test against a front led by future NFL first-round draft pick Raekwon Davis. The defensive end is particularly stout in the run game and will have plenty of pass-rush help from Isaiah Buggs on the weak side. He already has a pair of sacks.

The biggest matchup will come when the Ole Miss receivers, arguably the best WR unit in the nation, square off against the Tide’s DB’s.

The back of Bama’s defense was their biggest question coming into this season after losing NFLers Ronnie Harrison and Minkah Fitzpatrick. But they’ve responded early, by allowing less than half the passes against them to be completed.

And Louisville’s Jawon Pass and Arkansas State’s Justice Hansen are no slouches at the quarterback position. The secondary is a big reason the defense has only allowed 21 points in the first two games.

But A.J. Brown, D.K. Metcalf, and DeMarkus Lodge are a trio unlike any other in college football. And now Braylon Sanders is adding to the receiving group, contributing nearly 200 yards to a crew of four who have already compiled 714 yards.

As unprecedented as Bama’s defense may be for Ta’amu, the DBs for the Tide will get a test unlike any all season against this receiving core.

It’s just a matter if the Ole Miss line can stand firm for the QB to deliver those beautiful spirals.

The Tide will be scoring plenty of points against this defense. That much is a fact. Anything less than 35 would be an absolute worst-case scenario.

Even if it seems the Rebels have made strides on their defensive front, there’s a lot to be desired after giving up 41 points to Southern Illinois. Sure, it was a blowout. But the Salukis didn’t score those points in garbage time against backups. They put up 38 of their 41 points in the first half.

The Rebels didn’t pull away until the 4th quarter.

This defense has yet to put too much pressure on opposing QBs. In fact, it’s been a few years since they’ve done so. But there are some interesting and athletic pieces here, like Mohamed Sanogo at linebacker and 300-pound DT Josiah Coatney clogging up the middle.

But there’s still been too many lanes to run in. Southern Illinois top RB D.J. Davis had 121 yards on only 16 carries. Imagine what a stable of backs like Bama’s could do against such a weakened run-D.

Damien Harris is as good as any running back in the SEC, if not the country. And he’s only second on his own team in rush yards. That’s because former five-star recruit Najee Harris has put up 7.9 yards-per-carry (YPC) so far.

But you go up and down their roster and you’ll find plenty of backs able to take advantage of the weaknesses in Ole Miss’s front-seven.

The secondary hasn’t been much better, at least in terms of the opponents’ efficiency. The first two QBs to face them combined for this stat line: 51 of 79, 635 yards, 5 TDs-2INTs. So it’s not exactly a no-fly zone against the Rebels.

That’s trouble when facing Tua Tagovailoa. The Alabama QB has given coach Nick Saban and his team a whole new element on offense. The sheer explosiveness has now met the physicality that was always there on Bama’s offense.

And it’s hard to see the Rebel secondary being able to keep up with these receivers. Even if they are at Alabama, they were a younger group that didn’t get as much love as Ole Miss’s and West Virginia’s receivers when the year started. Now people are forced to pay attention.

Jerry Jeudy, Devonta Smith, and Henry Ruggs Jr. had to all step up their game once Calvin Ridley left for the Atlanta Falcons. None had more than 264 yards in 2017, but they were all true freshman. And now they’re breaking onto the scene in incredible fashion, burning Louisville to start the year.

Their route discipline is extremely rare for their ages. Combine that with their natural gifts, and they’re going to be one of the better groups in the country.

Ole Miss DB Myles Hartsfield might be the only guy who can drape his man in the secondary. Other than that, you may be looking at a free-for-all for Tagovailoa.

Fluster Ta’amu. The young Ole Miss QB has yet to face real pressure this season. He wants to remain in the pocket, unlike Patterson when he was at Ole Miss.

By squeezing his throwing window and flushing him out of the pocket, Alabama makes him far less dangerous. And moving forward into the pocket with pressure from Davis and Buggs will leave him vulnerable to one of the All-American-caliber linebackers.

Set the tone early. If Ole Miss gets punched in the mouth by one of these Bama running backs early on, there’s no looking back. If the Tide give them some reason for momentum, they may take advantage and keep things interesting.

Though I don’t think they can handle Tagovailoa through the air, they have far less of a chance of doing so if the running game is already churning.

In short, Bama just needs to keep doing what has been on offense, which is pretty much everything and then some.

It is a lot easier said than done, but if Ole Miss can just stop the explosive plays, they have plenty of offense to try and keep up on the scoreboard. By not letting Tagovailoa beat them over-top, they’ve already scored a big win on defense.

Protect the QB at all costs. If Ta’amu has a clean pocket, he will find some receivers.
He’s playing against a young secondary in Alabama that still isn’t completely settled in. Allow him to strike early and get his confidence up. He has plenty of talented wideouts. He just needs the opportunity to continually use them.

The RBs are probably not going to have much for running lanes. Or they might if Bama must focus on the pass so much. But either way, the fewer grass stains Ta’amu has on his jersey, the more the offense will open up as a whole.

The Ole Miss offense is not a hoax.

The receivers are major playmakers. The quarterback is a potential star. Coach Matt Luke and offensive coordinator Phil Longo know how to piece together an offense that’s simple to understand and develop in.

But they, unfortunately, have to play both sides of the ball.

Ole Miss needs to put up over five touchdowns just to keep the spread from being covered. Their skill players are talented, but maybe not that much.

There are too many things for them to answer for on defense. If you stop Harris, they can run at you with another guy named Harris. If you hold one talented QB at bay, you have to stop another one. If you keep a star sophomore receiver in-check, they have another, and then another.

Alabama just keeps coming at you with high-end recruits no matter how many you contain. There’s just too many boxes to check and spots on the field to cover if you’re the Rebels.

They may score on Bama like no one else this season. But Bama could conceivably score just as many points as they did in 2017 against them.

It’s going to be a long day for this Ole Miss defense.