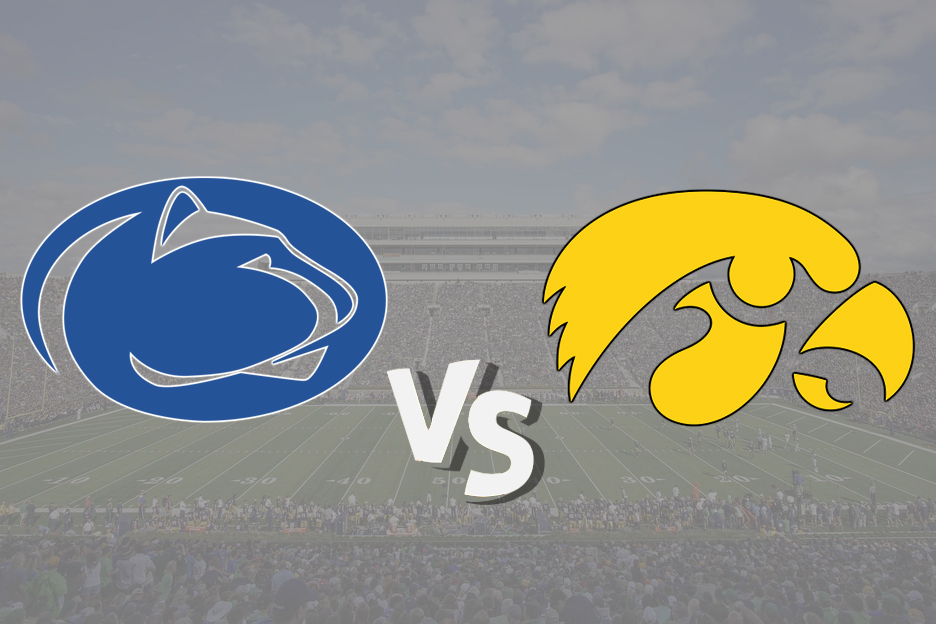 Out of all the teams who could still make the College Football Playoff, Iowa might be the most under the radar.

Their chances are extremely slim and there isn’t a very clear path in front of them. But they’re playing their best football right now, coming off a 23-0 thumping of Maryland.

Now they must beat a team that has four straight wins against them by a combined score of 113-50.

That team would be Penn State, who has fallen completely out of the CFB and Big 10 race in recent weeks. First, they lost a heartbreaker to Ohio State in a whiteout at home. Then they inexplicably played their worst game since the opener even though they were coming off a bye.

That game was a 21-17 loss at home versus Michigan State, a team who had seemed dead in the water. The Nittany Lions also followed that up with a poor performance at Indiana in which they needed a key sack to win against a very average team.

So it’s safe to say these teams are traveling in different directions, with Iowa recovering from a loss to Wisconsin and starting a hot streak while Penn State is seemingly folding.

But playing in Beaver Stadium against a Nittany Lions team still ranked in the top-20 is a tough proposition. That’s why 18th-ranked PSU is 6-point (-115) favorites, according to Sportsbetting.ag odds, over the 17th-ranked Hawkeyes.

But should they really be favored after the way they’ve played recently?

Penn State needs to be doing some soul-searching right now. But it seems as if they’ve almost been too stubborn to do so.

James Franklin is just now starting to give some of his younger skill-position players time on the field. But it was mostly due to injuries Saturday, at least at the wide receiver position.

And that’s where I’ll start. Because for as good as Trace McSorley has been at quarterback up until these last two weeks, he hasn’t been getting much help from his receivers.

It’s well-documented how he lost many of his big weapons before this season. And now the new group has compiled 21 dropped passes, the most in the Big Ten. Juwan Johnson has been a bright spot despite his own drops, but he was hobbled late in last Saturday’s game.

His left ankle was taped up and it’s not clear what his status is for Saturday’s game.

If he isn’t ready to go, most of those responsibilities in the passing game may fall on KJ Hamler, who is inconsistent but electric both on offense and special teams.

And that’s why it’s important that coach James Franklin got RB Miles Sanders more involved in the passing game against Indiana. He won’t be Saquon Barkley coming out of the backfield, but he can play as the security blanket for McSorley when the quarterback is under duress.

Sanders has also remained on pace to finish with well over 1,000 yards rushing and has 6.5 yards-per-carry. It’s what has buoyed a talented rushing attack that likewise features the scrambling abilities of McSorley.

But late in the game last week, Penn State went away from the run despite McSorley (107 yards, two scores) and Sanders (72 yards, 4.8 YPC) doing significant damage on the ground. This is besides the rough conditions that were already taking place at The Rock in Bloomington.

This was interesting, considering the fact the Nittany Lions seemed so timid to go away from the run against Michigan State.

Clearly, they’re at least attempting to find an identity. But they’re either just not as good as many thought they were, or Franklin and his coaching staff aren’t making the proper adjustments. And I’m thinking it’s more to do with the latter.

As for the defense, they haven’t exactly swarmed around the ball like they usually do. 53rd in total defense, tied for 72nd in fumble recoveries, and tied for 42nd in interceptions is ok but not Penn State-caliber.

Linebacking has been where it all starts for PSU. They’re known by some a linebacker U after all. And this group has been consistently reliable, but nothing to brag about.

Micah Parsons will eventually be a big-time disrupter on the edge. But he isn’t exactly filling up the stat sheet right now. Their leading tackler, Jan Johnson, was still a walk-on a few weeks ago. With that said, Cameron Brown has made his presence known in the backfield quite often (five tackles-for-loss).

And whatever production they haven’t been getting from the linebacking group they’ve been more than making up for on the line. Yetur Gross-Matos, Shaka Toney, Shareef Miller, and Kevin Givens have combined for 30 tackles-for-loss.

The Nittany Lions place 9th in the category and 13th in sacks. They’ve also gotten stops at critical junctures (the Ohio State game aside), ranking 20th in red zone defense and 15th in third-down defense.

The formula for all great Iowa success is to have a stifling defense and to take possession time away by pounding the rock.

The Hawkeyes can still do the defense, but they’re able to rely a lot more on the aerial attack nowadays.

QB Nate Stanley has been a consistent force for this team, with 16 touchdowns to six interceptions and a completion percentage over 60%. His passing efficiency (156.8) is far beyond McSorley’s with just 11 fewer passing attempts.

He’s also better in this category than the following QBs: Ryan Finley, Jake Browning, Shea Patterson, Sam Ehlinger, Gardner Minshew, and Brett Rypien. Sure, they may have more natural arm talent and comparable-or-better playmaking abilities. But Stanley is almost as stable as they come.

And it’s not like the running game has been that dynamic. Averaging 3.9 yards-per-carry is nothing to write home about. The line is still a pretty stout one. And despite Stanley’s lack of mobility, they’ve allowed the 14th-fewest sacks in the FBS.

But they’re going to have to hope at least one of RBs Toren Young and Ivory Kelly-Martin can get something going against such a physical D-line of PSU.

Iowa still has a knack of controlling time of possession (ranked 24th) though. And that makes it even harder to score on one of the better defenses in college football.

And speaking of physical defensive fronts, the Hawkeyes have one of their own.

Their 3.22 sacks per-game is tied for seventh in the country. They’ve been the catalyst for a defense that’s allowed 30 points only once and given up a total of 221 rushing yards over its last three games.

Two ends, 6’7” Anthony Nelson and 6’5” A.J. Espenesa, have created plenty of commotion in the backfield. They have 11 sacks and 12.5 tackles-for-loss between them. Parker Hesse, another prized veteran and four-year contributor on defense, has seven TFL.

This is a big group that can still cover the field well. They could do a little better on third downs (48th) and will have to account for what is easily the most athletic QB they’ve played this year.

But beating them deep has gotten harder too, with Amani Hooker leading the secondary group.

They haven’t been beaten up all year, not even in the Wisconsin game. Sure, they lost by 11, but the stats represented a closer game.

It all came down to execution at the most critical of times. Iowa didn’t have that then offensively. But the defense has continued to be a constant force with NFL talent at all three levels.

Iowa has been able to shut down every run game they’ve faced aside from maybe Wisconsin’s. And even then, Jonathan Taylor’s 4.5 YPC wasn’t all that impressive.

But Miles Sanders offers a little more speed around the tackles than any other opposing RB has against Iowa. He’s becoming more of a presence out of the backfield too and is an excellent partner with McSorley for run-pass option (RPO) plays.

Iowa will see several things on defense they haven’t yet this year. And a lot of that will start with Sanders. Likewise, the young RB can’t compare this defense to any he’s ever played against. Still, he gashed a pretty good Michigan State squad for 162 yards and 9.5 a carry.

This is another strength-versus-strength matchup.

Iowa has managed to keep themselves in the top-15 of least sacks allowed, giving Stanley a clean pocket. It has definitely boosted his confidence and numbers.

But despite what those last four teams may have done to help the Hawkeyes’ stats, the first two only had one combined sack between them.

And for Penn State, six of their sacks were compiled against Indiana alone. They only had one against Ohio State and haven’t played another top-25 team, so this will be a true test for them.

Still, compiling nine in the last two weeks is impressive, especially the sudden rise of Toney, who had four against the Hoosiers.

This line will probably continue to move toward Iowa as the week goes on. But for now, with the spread at 4.5 points (-110 odds or both teams), the wager here is for Iowa.

They’re trending up in all the right ways, whether with their stout defense or playmaking abilities in the passing game. They’re also one of the more consistent teams in the country. You know what you’re getting from Iowa, a physical, mostly mistake-free football team with enough natural talent mixed in.

Meanwhile, Penn State’s stock has plummeted hard since the Ohio State loss. They’re erratic and even more unbalanced, relying on McSorley and Sanders for way too much of their offense.

Iowa has the strength to cancel one of them out and make the other single-handedly push the offense forward. That’s a hard thing to do against such a highly-ranked defense that doesn’t look particularly weak at any position.

If the Nittany Lions couldn’t figure out what kind of offense they wanted to be coming off a bye or late in the Indiana game when they threw way too much, then it’s unlikely they find their groove now.

Iowa has the confidence and veteran leadership on the defensive side of the ball that Penn State doesn’t have. They also protect the ball and their quarterback, which is huge in low-scoring games like this one will be.

Being in Happy Valley will give Penn State a slight advantage. But Iowa is 8-1 ATS in their last nine games and has covered their last four road matchups.

It might be a field goal game, but Iowa could easily win this one outright.