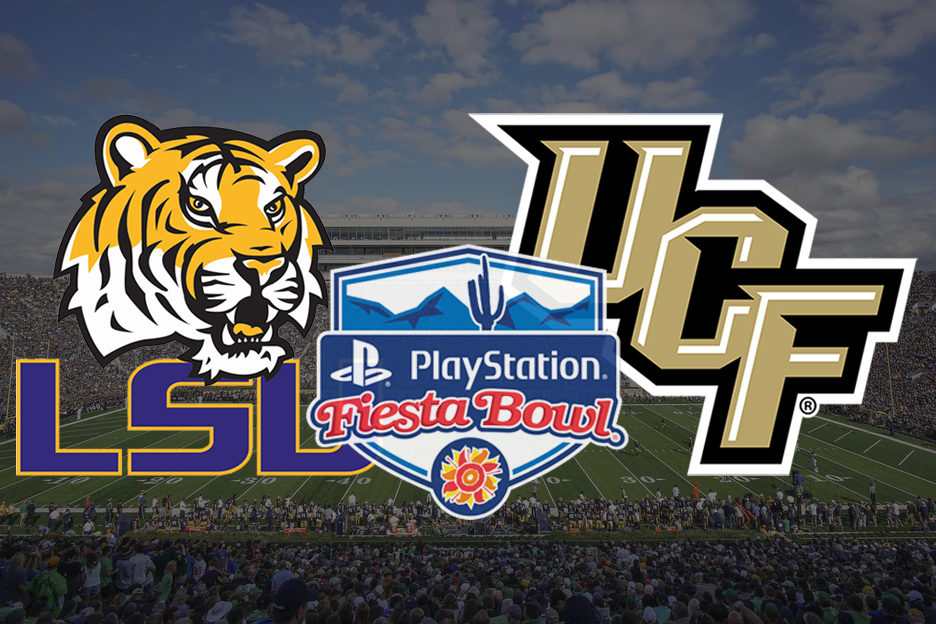 The UCF Knights are riding a mind-blowing 25-game winning streak, and they have yet another opportunity to prove that they belong in the conversation with the nation’s elite programs. They’ll be taking on the LSU Tigers on New Year’s Day in the PlayStation Fiesta Bowl, a game which kicks off at 1 PM EST in Glendale, AZ. and will be broadcast to the nation on ESPN.

The Knights closed out the season a perfect 12-0 and as champions of the American Athletic Conference. That feat is made all the more impressive by the fact that they lost star QB McKenzie Milton to a devastating leg injury during a 38-10 victory over the South Florida Bulls. Backup Darriel Mack Jr. stepped up to the plate for the following week’s conference title clash with the Memphis Tigers, and he didn’t miss a beat while producing six total touchdowns in a 56-41 victory.

The Tigers put together a solid season in which they resided in the Top 25 for much of it, finishing out as the #11 team in the nation according to the College Football Playoff committee. The season opened up with a 33-17 upset victory over a Miami Hurricanes team which entered that contest ranked #8. LSU fared well versus a tough conference schedule, going 5-3 in SEC play. However, they were dominated by the conference powerhouse Alabama Crimson Tide to the tune of 29-0.

This one shapes up to be a real dandy, so we should be in for a treat on New Year’s Day. Let’s take a look at this contest in full detail, starting with the game line.

LSU was actually a three-point home underdog heading into the opening week tilt with Miami, but the Tigers would prove the oddsmakers wrong with a double-digit victory. The team made it all the way to 5-0 before losing to the Florida Gators, the #22 team in the nation at the time. LSU’s other two losses also came to Top 25 teams in Alabama and the Texas A&M Aggies, but they would win their other four games versus nationally ranked squads.

One of the knocks against UCF is that the club didn’t exactly face a murderer’s row of a schedule. The Knights only faced off with one other ranked squad, a 38-13 victory over the Cincinnati Bearcats. From a bottom line perspective, UCF has taken care of business versus every team it has faced for two years. That’s an impressive accomplishment at the FBS level. Period.

LSU had a 4-0 mark in out of conference play in 2018, but Miami is the only one of those games which can be classified as a tough matchup. However, the Tigers made up for that in conference play, as a whopping six of its eight games versus SEC rivals were against Top 25 teams. The Tigers scored seven double-digit victories on the year, while it’s only big loss was to Alabama.

To further bolster UCF’s case as one of the nation’s better programs, 11 of the Knights 12 victories were by 10 points or greater. Only the Memphis Tigers played them close during the season, as UCF escaped with a 31-30 victory. While the Knights schedule wasn’t as loaded as LSU’s, the team still handled business in convincing fashion versus nearly every program it faced.

UCF is clearly the stronger team on offense, but that’s mitigated by the fact that they’ll be squaring off with the stout LSU defense. This will be the toughest test of the year for the Knights. Win and they undoubtedly deserve consideration as a Top 10 program, while a loss will only open up more questions about the school’s overall strength.

Miscellaneous stats are basically a wash, with the notable exception being UCF’s strength in protecting its own signal caller. That’s a big positive as they prepare to face off with a ferocious Tigers defense, but there’s also no guarantee they’ll be able to stand up to the toughest team they will have faced on the year.

There’s no head-to-head history to examine, so we can move right along to recent bowl game trends for both sides. Over their last five bowl game appearances, LSU and UCF have matching 3-2 records. The Tigers came up short in last year’s Citrus Bowl to the Notre Dame Fighting Irish, while the Knights vanquished the Auburn Tigers in the Peach Bowl.

Can UCF step up to the plate and take down another SEC powerhouse in a bowl game the following year? Recent Fiesta Bowl games have been kind to underdogs, as they are 3-2 straight up and against the spread over the last five. Last year, the three-point favorite Penn State Nittany Lions took down the Washington Huskies by a score of 35-28.

For this year’s edition, LSU currently sits as a seven-point favorite.

This is perhaps the most intriguing matchup of a solid New Year’s Day bowl game lineup. Is UCF really a program that deserves to be in the conversation with the nation’s heavyweights, or is the clock about to strike twelve in dramatic fashion as their lengthy winning streak comes to an abrupt end?

That’s a distinct possibility. LSU boasts a stout defense, and they also have the added motivation of not dropping a highly-anticipated contest to a school from what’s deemed to be a lesser conference. However, we fully expect UCF to go down swinging. The Tigers come out on top in the end, but the Knights keep it close and competitive.

We’ll take UCF plus the points.