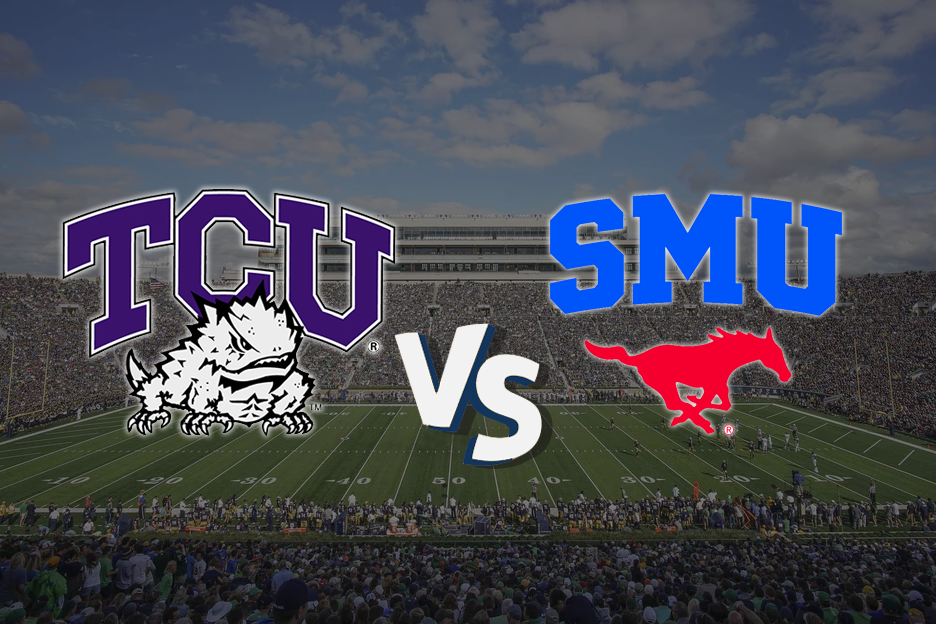 After an opening week of College Football that was spread out across several days, we return to a normal slate in Week 2 with the majority of the action taking place throughout the day on Saturday. However, we do have one matchup to look forward to on Friday night, and it looks to be a pretty intriguing one.

Let’s take a look at the game between a pair of neighboring schools that make their respective homes deep in the heart of Texas.

The 1-0 Horned Frogs will be taking a quick trip down the road to face off against the 0-1 Mustangs. TCU is ranked #16 in the nation and comes into this tilt as a big favorite. Based on what we saw during the first week of the regular season, it’s not too tough to see why.

TCU was expected to rout Southern in the opener, and the club delivered to the tune of 55-7. Sophomore signal caller Shawn Robinson was electric with five total touchdowns on the day – three through the air and a pair on the ground.

It was a balanced offensive attack for the Horned Frogs against the Jaguars, as the team produced 264 yards through the air and another 235 yards on the ground. Opponents will have their hands full attempting to contain Robinson and company this year.

Opening week was a different story for the Mustangs, as they went down to defeat to North Texas by a score of 46-23. Junior QB Ben Hines had a tough game, completing 12 of 24 for 252 yards, two touchdowns, and four picks while also being sacked four times.

The Mustangs just couldn’t get anything going offensively until garbage time, as North Texas was up by a score of 36-0 heading into the final quarter. As you would expect with a team playing from behind, the running game was almost non-existent, as SMU managed a paltry 4 total yards on the ground for the entire game.

Heading into the season, it was also a tale of two teams. Oddsmakers pegged TCU with a projected win total of 8, while SMU was expected to muster only 5. It’s the same story as far as conference play goes as well.

There’s a legitimate case for TCU to challenge for the Big 12 title at odds of 6/1, but the same can’t be said for SMU in the AAC at odds of 40/1. Looking ahead to Friday night’s tilt, most signs point to a three-touchdown spread being a fair assessment of the state of the two programs.

This rivalry stretches all the way back to 1915, and the schools have met a total of 97 times. TCU holds an overall edge in the series of 50-40-7. Recently, TCU has been absolutely dominating its neighbor by ripping off six consecutive wins.

Oner the last ten contests between the two schools, TCU is 9-1 straight-up, 4-6 against the spread, while the Over has come in 7 times. This game’s projected total of 58.5 points is actually the lowest since the 2014 meeting, which checked in with an O/U of 47 points.

TCU won that one going away by a score of 56-0. The last three years have featured totals of 64.5 points or greater, and the Over came in twice. SMU has kept the final score closer than 20 points only once in the last five meetings between the two schools, a 56-37 loss in 2015.

Last week, SMU struggled against the pass but held the North Texas ground game relatively in check. The Mean Green’s junior QB, Mason Fine, had a banner night, as he completed 40 of 50 for 444 yards and 4 TDs. The lack of success on the ground for North Texas – 68 total rushing yards – could be more a product of Fine finding little more than target practice in the Mustangs secondary.

Robinson could be in line for another big night as a result, but TCU’s stable of running backs could be poised for a field day as well. While there was no breakout backfield star last week against Southern, TCU features a dangerous three-headed monster that can deliver when called upon.

Junior Darius Anderson, sophomore Emari Demercado, and junior Sewo Olonilua were all relatively productive in the rout of Southern, but they may be more involved this week. Olinula produced 43 yards on just five carries last week, while Demercado added on 57 yards on just eight carries.

Recent history between the two schools suggests that SMU will have an incredibly tough time holding TCU in check. When you add in the fact that the school was unable to mount much of a challenge to North Texas in Week 1, the chances of that happening diminish even further.

TCU has a tough schedule in the coming weeks, including next week’s date with Ohio State at AT&T Stadium in Arlington. While the school has the benefit of staying in familiar surroundings for that one, that’s of little solace with one of the top teams in country heading to town.

For SMU, an already challenging season doesn’t get any easier with a trip to Michigan up next. Week 3 matchups aside, we can safely assume these two rivals are squarely focused on this year’s edition of the ‘Battle for the Iron Skillet.’

SMU has been able to keep TCU’s margin of victory to 20 points are less in just two of the last five meetings with its rival. We can’t come up with a convincing case that suggests the school will be able to pull that trick this time around.

A talented TCU squad should be able to handle its rival without issue. The disparity between the two schools also looks to be great enough to suggest that the Horned Frogs cover the spread to boot.